Trackpoint? I would buy it, would be quite the jump from my classic keyboard modded x230/T430.

This is the only thing preventing me from buying a Framework. Many shops and other areas almost exclusively use Thinkpads because of their trackpoint. Any work done in the field (especially with gloves) at these places, basically requires a trackpoint. I really hope Framework or a third party through the market place creates this. As soon as this is possible, I will buy a Framework in a heartbeat.

Having a TrackPoint (pointing stick) on my laptop is an extremely important feature for me. ThinkPads have really dropped the ball over the last few years with soldered memory, and I’d be first in line to buy a Framework Laptop whenever an pointing stick keyboard option is available.

The two things holding me back right now from buying a Framework are Touchstick/Trackpoint and a touchscreen w/stylus. I am coming from an X1 Yoga w/Arch Linux, which I really love, but don’t love the memory limitation of 8GB on it.

I personally like the ThinkPad keyboards, I even bought a ThinkPad II wireless keyboard that matches my X1 perfectly so when I dock I am on the exact same keyboard and my muscle memory is not uninterrupted, which I think everyone should do too, it makes a big difference in switching from dock to mobile.

So, I actually would prefer the ability to swap in a real ThinkPad keyboard. e.g. 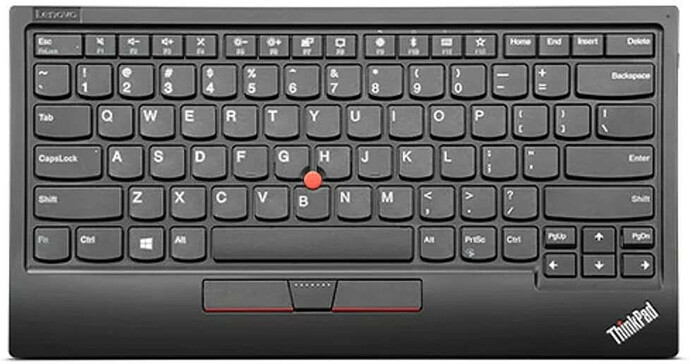 I am looking to replace my Thinkpad X270. I would much rather get a Framework laptop than the new X1 carbon, but I have preferred using the trackpoint since the mid 90s.

It seems the best option would be a replacement keyboard bezel/palm rest which could accommodate a thinkpad keyboard.

I look forward to seeing the marketplace open.

with or without a trackpoint device, I admit that I miss having the keyboard close to the edge of the laptop (no track pad) Never really used the trackpoint even when I have one.

@Ben_Henry Also coming from the X270. It is the best form factor I’ve ever had in a laptop. But being only dual core has made it age before it’s time. Excited for the Framework with or without a Trackpoint. But the moment one is available, I’ll be shelling out for that upgrade.

Agreed with many of the posters above - a trackpoint and touchscreen are required for any notebook. Trackpads are unusable IMHO.

Thinkpad style trackpoint would basically make the surface laptop a guaranteed buy in my book, doubly so if/when they come with ryzen hardware. so absolutely +1 to this needed a trackpoint keyboard option

I love that this thread is so long, and that so many people love the trackpoint. I love it as well!!! It would be great if we could get a keyboard upgrade (as that is how I would classify it) with a trackpoint.

For all of you saying you would instant buy one, consider buying one and trusting in the companies goal of making 3rd party upgrades and parts a reality. The company’s vision is worth it.

+1 to @2disbetter Expecting mine to arrive in November and I will do my best to re-learn some touchpad wizardry (Pop_OS has some pretty cool touchpad gestures built in). Looking forward to seeing either a trackpoint keyboard or some type of adapter to allow us to hack in a Thinkpad replacement keyboard. They are certainly plentiful enough on the market. That may be a harder engineering problem than just building one from scratch for the Framework, but I love the possibilities.

HP on all business machines

Sadly this is not true anymore. HP’s trackpoint has been rapidly disappearing over the years. The only models that have it anymore are the 14" and 15" Elitebook 800 series and the Zbook equivalents. So effectively 2 models.

@Radomir_Polach Pointing stick true believers are less common than hardware shipping stats would have you think.

I’ve worked at a company where standard-issue equipment was once HP Elitebooks and later Dell Latitudes. I never, ever, ever saw anyone use a pointing stick, and if I’d point out that they were neglecting the best pointing device ever would get responses ranging from “Oh, I didn’t know what that thing was” to “It doesn’t work well; the cursor just goes everywhere.” But mostly the former, which more suggests a lack of curiosity.

Similarly, I spend time on r/thinkpad on Reddit and the number of desk shots where you see this self-selected group of ThinkPad enthusiasts with a mouse or trackball is astoundingly high. When it comes up in the comments (which it doesn’t often; people tend to treat it as normal) attitudes often range from “Mouse is better” to “Trackpad/gestures are better” to “TrackPoint is good but only on-the-go where a real mouse isn’t convenient.” The TrackPoint benefits that you and I understand can be easily lost even on people who’ve bought the right hardware and really should know better.

It’s hard to blame the people who’ve actually tried TrackPoint and given up on it. The first-time UX of TrackPoint is absolutely one of the worst I’ve ever seen. You have to get used to much finer motor movements than you’d expect, while other pointing devices (at least seem to) map physical movements 1:1 to cursor movement. And it’s frustrating to try to get things done while you’re getting good at it.

I’ve long thought that Lenovo should ship a utility with their Windows installs that briefly educates the user on the benefits of TrackPoint and shows them how to set the sensitivity to a level they feel comfortable with, because understanding these are table stakes for creating a new TrackPoint enthusiast. And maybe it should include a simple game. Most people don’t have an enthusiast leaning over their shoulder going “You really need to learn this thing. It’s going to change your life.”

Bringing this back on-topic, this is all to say that while I don’t have hope of TrackPoint becoming an official option on Framework, it’s heartening to see there’s energy enough here that maybe we’ll end up with some kind of good community solution.

@everett That’s hard to believe as I know so many people who use TrackPoint. Using a mouse or TrackBall is nothing against using TrackBall, there is a Lenovo mouse in front of me as well, but I hardly ever use it. And I am a daily visitor of r/thinkpad and I post there as well. I should make a poll there.

So, I investigated and I can disassemble my ThinkPad keyboard and extract TrackPoint together with Teensy make it into a USB device. Can you just make a hole and some space?

Two weeks on my new Framework. The only think I miss from my Thinkpad X1 Carbon is the trackpoint. And I do miss it.