Boost Power Limited to 30 W, not the advertised 60 W

The Framework Laptop is advertised with two Power Limits for the CPU. A power limit 1, aka TDP, of 28 W, and power limit 2 (short term boost) of 60 W.
In BIOS I have configured max turbo mode, battery charge limit to 70 %. I tried two different third party 65 W power supplies: my CPU, i5-1135G7, reaches PL1 but not PL2.
From my measurements with ThrottleStop/HWinfo64 and also a wall powermeter max power draw of the CPU (PL2) is 30 W. 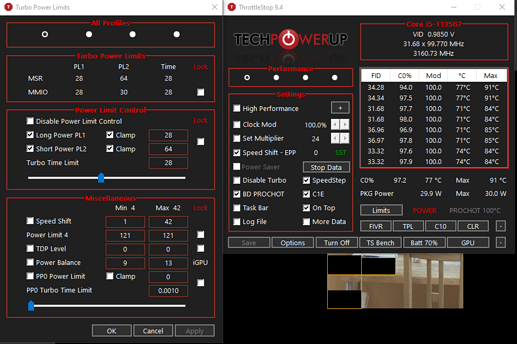 Has anybody the same issue? Could the charge limiter prevent the 60 W power limit?
What could be another limiting factor?

Has anybody the same issue? Could the charge limiter prevent the 60 W power limit?

Is there something wrong with the 3.08 BIOS? Framework Laptop

I have a question (I seem to be running into something): Say I have a 90w USB PD adapter. Battery level is 66% Charge limit set to 72 in the BIOS Unit is plugged in and charging. How does the Framework laptop request and distribute the power allocation to/between 1. Run the system. 2. Charge the battery? Reason why I’m asking: The system seems to put “Charging the battery” at priority 1. And that leaves limited power for running the system at peak performance (doesn’t reach peak performa…

I’ve given up on the Framework laptop for the time being…it’s one of the most buggy laptops you can buy. It isn’t a dependable piece of equipment at it stands today, especially when you compare it to other more mature manufacturers (sure, they have issues too, but not to the extent that the Framework laptop is).

I’ve given up on the Framework laptop for the time being…it’s one of the most buggy laptops you can buy.

Guys…it’s their first laptop. Anyone here think they could do a better job first time around?

We know. I’m just saying that anyone should know what they’re getting into when purchasing anything (laptop or otherwise…or marriage, or career…).

Anyone here think they could do a better job first time around?

It’s not a competition.

Just know that for the same amount of money…you could potentially have a smoother experience elsewhere. i.e. know your options.

I’ve done my part for the cause (buying from Framework)…but the hardware and experience is not living up to the expectation. So that’s that. I’ve moved my work to other systems, while still waiting for Framework to get the laptop into shape.

(i.e. the ‘benefit’ for the upgradability and repairability won’t materialise until it’s a piece of hardware that people would stick with.)

From reading through loads and loads of posts the past 5 months or so, it seems to me 80%+ of those having issues are using Linux…

Think that might have something to do with the userbase sample pool.

(Consder who would purchase a Framework laptop, AND who would join the forum, AND ask for help…etc… Any data point has a reason / intrinsic bias as to why it’s a data point)

Intel CPUs use multiple sets of turbo power limits. The CPU compares the MSR and MMIO power limits and uses the lowest value.

You need to check the MMIO Lock box in the ThrottleStop TPL window to disable the 30W MMIO PL2 limit.

On “Best performance” HWiNFO shows PL2 at 60W on my machine.