To add a data point: temperatures on my 1135g7 model are very good. During cinebench r23, temperatures peak at 85c and average in mid 70s. During normal use, the temperature is usually in the 40s.

I have a MSI laptop that the Framework is going to replace.

The MSI is a hot running machine to begin with, but it works fine. I just always make sure it stays on a tray on my lap so it gets air.

I have faith in the Framework running as advertised… And happy to use the lap tray always.

I don’t understand folks canceling orders because of a few reviews that I found questionable to begin with.

Framework is just like any other laptop, try it out and if it is not what you need, return it.

I’ve had my i7 1165G7 based Framework system for about 4days. I’m happy with the system, but from the first power-on & before any application installations, it has run hot with the fans audible even sitting at an idle win10 desktop. The fan noise is definitely higher than I’ve experienced on a wide variety of laptops over the last several years.

I used ThrottleStop on msomey prior laptops, but am unable to enable undervolting on this new Framework system.

I’m fully updated on win10, with no unrecognized devices in the system.

Using the default “Balanced” Power Plan shipped with the system & while powered via USB-C, I notice that even after several hours sitting at idle on a table with good airflow in a 22C room, at idle the system never drops below about 3.6Ghz at an idle desktop (“idle” CPU load is ~25% as reported by TaskManager. Host Process for Windows Tasks alone is consuming 18–22% at idle.)

On battery power, the system is cool & quiet unless pushed hard.

Overall, I’d say that my experience sounds very similar to that reported in the Gizmodo review. I would definitely like to resolve this as it will improve ergonomics, power usage, and possibly performance. I’m willing to do experiments & provide data to suggestions. I’ve not yet checked the thermal compound or re-seated the cooler. The system is still in the factory delivered hardware state

I’ve seen the ongoinng discussions about ThrottleStop & Intel CPU microcode updates to prevent undervolting attacks. Is there any available mechanism for users to undervolt Framework systems?

Thank you for building this system & I look forward to your ongoing success!

Hi Gary, thanks for reporting this. Could you grab a tool like ThrottleStop or Downloads - Open Hardware Monitor and let us know what the package temperatures are reported at when sitting at idle or normal use and also when under heavy load (like running Cinebench)?

I’ve not researched what settings change between these two BIOS setting blocks, but in my case the “Custom Defaults” definitely seemed to resovle the high fan noise, lower performance, and hot temperatures. 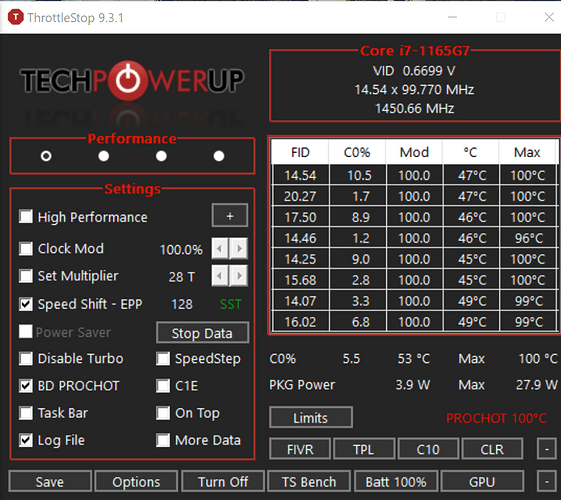 These are the sequence of tests & summary of the results:

I have a ThrottleStop log file capturing the idle before testing through idle after the final 8thread test. I can send the CSV file if that’s helpful.

I agree, this data looks as expected. My temperature & fan issues seem to have been resolved by loading the BIOS Custom Defaults. I didn’t save my systems initial settings, but as soon as I rebooted with the Custom Defaults performance, temperature, & fan behavior all seemed to be what is expect for a new system like this.

Could there be a control issue with the firmware state systems exit manufacturing with?

While my testing was far from scientific (was downloading a game from steam), I can confirm that resetting to “custom defaults” seemed to fix the issue for me.

In my case, I was maxing out one CPU at a time, not the entire system, and was getting 90-95C sustained (as far as I could tell). 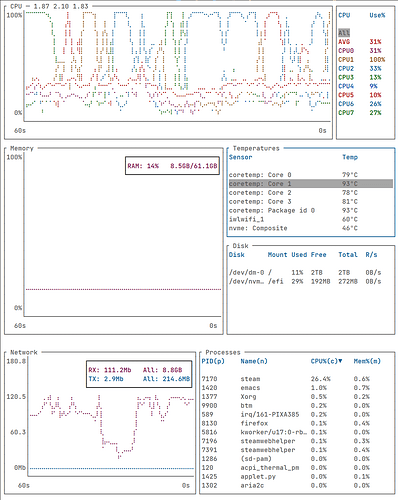 That was, unfortunately, the tool I had available and it didn’t have a temperature graph. 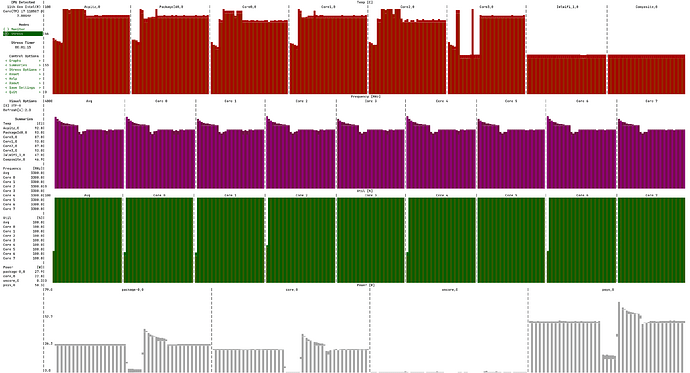 That’s temp, frequency, utilization, and power; top to bottom (same as the sidebar). 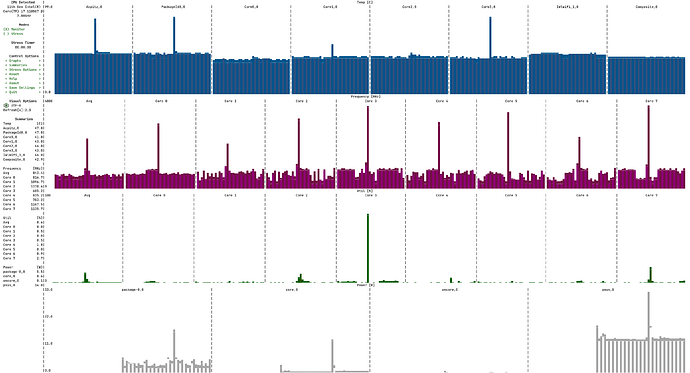 @Stebalien what monitoring software is that?

@Stebalien what monitoring software is that? 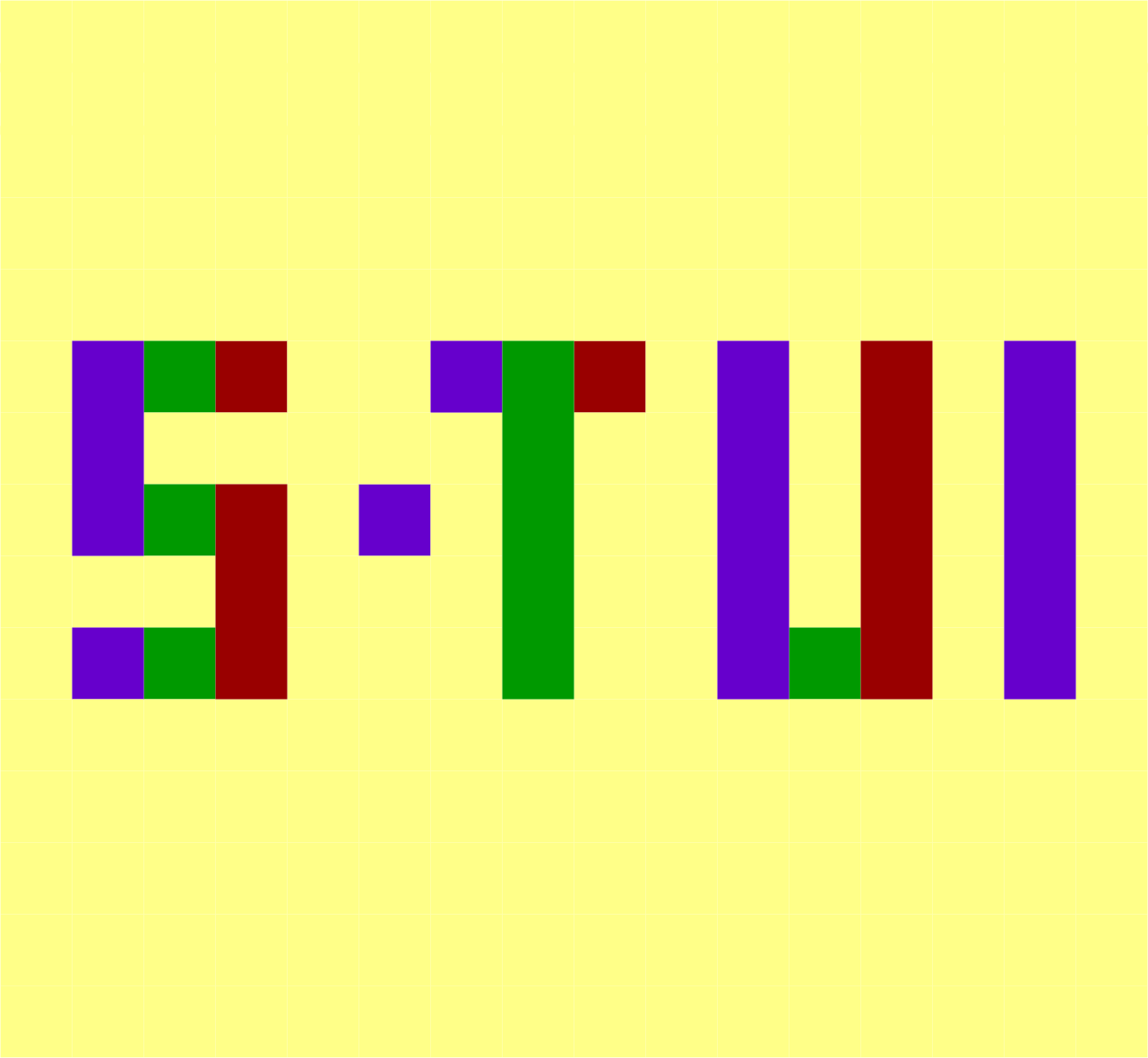 Terminal-based CPU stress and monitoring utility. Contribute to amanusk/s-tui development by creating an account on GitHub.

@Stebalien nice monitoring tool. What were the ambient temperature conditions when you ran the benchmarks?

@Stebalien nice monitoring tool. What were the ambient temperature conditions when you ran the benchmarks?

Somewhere in the 24-26C range (inside, not in direct sunlight, cool wooden desk).

Got it. Those core temperatures are slightly higher than we would expect for that ambient temperature (~50-60C above ambient is what we’d expect).

@Stebalien That monitoring tool is so cool I had to try it!
I have the 4 core i5-1135G7 DIY version with 2x16G RAM. Running Kubuntu+RegolithWM. I haven’t seen any overheating issues so far. Here’s a screenshot of my stress test result with 8 worker threads running for over ten minutes. Quite stable ~60C. I had tlp enabled and AC power plugged in. 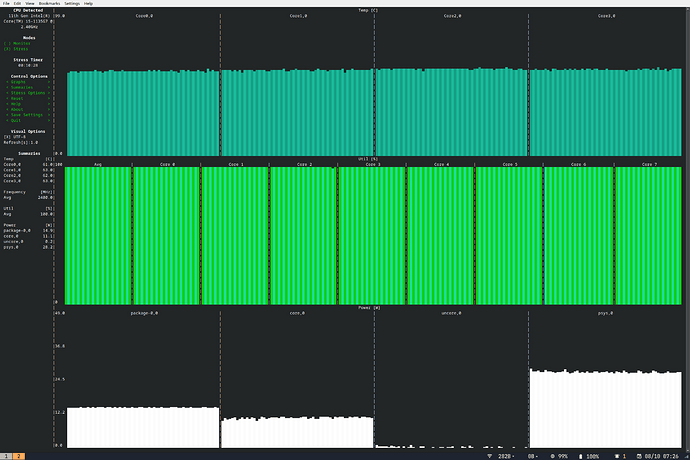 @Stebalien I think the base frequencies are intended by Intel to be minimum guarantees, but you can sustain all-core frequencies above that.

I’ve continued to wonder about the thermals of my system. The fan was on & temperatures were high more often than it seemed that they should be.

Today I took advantage of the ease of disassembly in my Framework Laptop to inspect the thermal interface material on my heatsink. I did one ThrottleStop 4thread TSBench run & got my typical result of ~29.3sec ending at 100C before I disassembled the system.

On inspection, there was a void in the thermal interface affecting aprox 35% of the CPU’s surface area. (I have a photo documenting the void.)

I cleaned the CPU & chipset die & package substrate, cleaned the heatsink, & applied fresh Noctua NT-H1 thermal paste before carefully reassembling the system. (Isn’t it great that we can do this! The total time was <<20min.)

Repeating the qualitative benchmark with ThrottleStop, the results are clear. The fans run slower & less often. The temperatures are cooler & the benchmark results are improved. (I have the before & after ThrottleStop log file & charts showing the monitored results.) In particular, temperatures rise more slowly & peak lower under the same test after the change.

If you’re experiencing high temperatures or excessive fan noise, first use the Custom Default BIOS settings & if that doesn’t fully resolve it replace the thermal paste in your system.

I’m thinking this is also a great example of the success of the DIY program. For myself, I would much rather have some thermal paste shipped to me and let me re-install myself, versus having to ship the entire machine back to the manufacturer. Lenovo once tried to get me to do an RMA on a ThinkPad for a keyboard driver issue - I of course refused & just waited for the updated driver release.

Has anyone ever heard of Dell, HP, etc. shipping someone a tube of thermal paste to fix their issue? It would never happen. But for lots of us DIY’ers, that would be the preferred solution, so I can make sure it’s done right. And how much easier & cheaper is that for Framework? Genius!