How easy is this laptop to assemble?

Hi all, I’m thinking of ordering one of the DIY laptops, but am worried that either the pieces will not fit together properly/ I’ll botch it/ I won’t even understand what might not be working. Despite having worked at a computer most of my working life, I have no idea how they work and have never looked inside one. The video on the website makes it look very simple, but then here on the community there are lots of messages from people who have had problems. I wonder if anyone could share their experience of assembling the laptop - is it really as simple as in the video? Also what kind of support could we expect from Framework if there is something we can’t fathom ? Finally, has anyone returned their DIY laptop, and how did that go?

Loosen 5 screws on the back. They do not come out completely.
Open the laptop and have it face up.
Lift the keyboard off.
The memory slots, the storage slot, and the Wi-Fi slot are visible.
Each slot is keyed, i.e. things will only insert on way.
For the storage and Wi-Fi slots you have to remove a screw and put it back in after.
The hardest thing to do is to attach the antenna wires to the Wi-Fi card. The connectors tiny and the fit is tight.

I did not loosen the keyboard connection cables and haven’t had any issues.

You do need to pay attention to the operating system install of your choice.
Following the guide, that also went well for me.

Nominal about 45 minutes. From opening box to have a working system.

Note: I had previously used the Windows Media Creation Tool to create a bookable usb-a flash drive for installation of Windows 10.

You do have a very well-documented guide to follow: 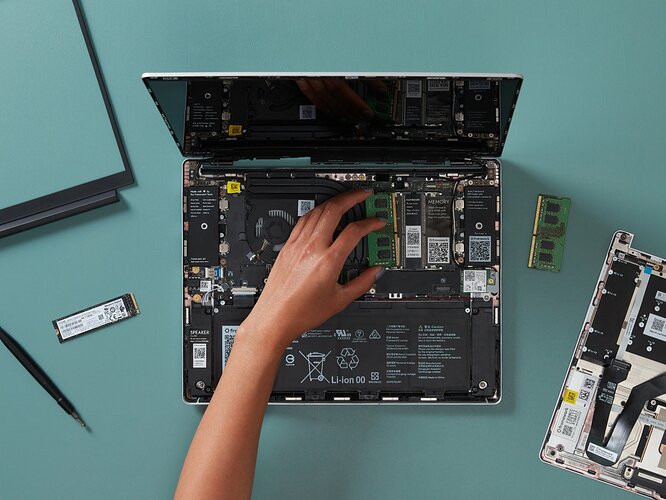 How exciting, you finally got your hands on the Framework Laptop DIY Edition! This guide will walk you through each step from unboxing to powering on...

And the QR codes on each component inside will guide you to those pages.

Get familiar with that guide and you’ll be well-prepared.

I’m probably not the best judge because I’ve built a lot of desktop computers and have been working with my hands and tinkering with electronics for many years (most of my life). But I would say from the time I grabbed the screwdriver to the time I set the screwdriver down and pushed the power button was probably 5 to 10 minutes.

The main cause for concern would probably be the antenna wires for the Wi-Fi card. Most will recommend you connect the wires before installing the card. I understand the idea behind this, but I would recommend a slightly different approach. I temporarily installed the card with the screw loosely started to hold it in place, but without the metal cover/shield in place yet. Then I carefully tweaked/shaped the wires so that they would essentially lay right where they needed to go. Then I pulled the screw back out, allowing the card to “tip up” a bit. At that point I carefully clipped each wire into place, being very deliberate to make sure the connectors were horizontal to the board before applying any pressure. Once the wires were clipped into place, I could push the card back down without the wires wanting to pop off, because they were already shaped to go right where they needed to be and weren’t putting pressure on the connectors as they tried to bend into place. Then I placed the shield in place and put the screw in and snugged it down. Only took a couple minutes. Still, the connectors are very small and can be a challenge to get lined up, particularly if you are unfamiliar with this type of connection.

The ram and SSD are easier. They are keyed, so they can only go in one way. The ram sticks simply snap into place, and the SSD has a single screw that holds it down.

I understand the apprehension. If it’s not something you are comfortable with, maybe the assembled option would be a better place to start. But not only Framework themselves, this community too is also very willing to help and offer suggestions and support to those with questions or problems.

IMO the only tricky part is the WiFi antennas. However that should be addressed now or soon depending on where you are:

Now Available for Pre-order in UK, Germany, and France

For laptops going to the UK, Germany, and France, we’re instead pre-installing AX210 WiFi 6E cards on the DIY Edition to save your time and sanity. We’ll bring that change to the US and Canada too in the future.

Thank you feesh, BigT, Edward Gray, fraoch, That is quite reassuring. I’ll have a look at the guide, and it is good to know that one of the trickiest parts has been sorted out.
Unfortunately the ready-built laptop is beyond my budget.
I am apprehensive because I don’t really speak ‘tech’ language and find the world of computers quite intimidating. I am hoping that the guides and instructions don’t assume too much knowledge and are written are for idiots like me!

The parts only go in one way. They’re keyed as @BigT mentions. If they won’t fit, something’s wrong, don’t force it. Take a step back, examine the guide and examine the parts.

The hard part has been done for you - the parts Framework sells are fully compatible. If you can find identical parts elsewhere for a lower price, go for it. If the parts are not identical, post them here and someone will tell you whether that part is compatible or not.

the ready-built laptop is beyond my budget.

Just bear in mind that the base “DIY” laptop doesn’t include RAM, an SSD or an operating system. Make sure you factor the cost of those into your budget or you may end up with a laptop you can’t use and no money to get the parts needed.

As others have said, the only thing I found tricky or fiddly was attaching the antenna wires to the tiny jacks on the WiFi card, because the wires kind of want to twist out of position. Just took some patience. But newer orders will have the WiFi cards preinstalled.

It’s worth noting that the DIY laptop is not as DIY as you might expect; it comes fully assembled except for RAM and storage (and in some cases at least in the recent past the WiFi card), so “assembly” is basically what you’d do if you had an existing laptop and you wanted to swap in newer or faster RAM or storage. There are a lot of preassembled components you don’t even have to think about, like speakers, display, webcam, battery, and the keyboard and touchpad mounted in the “input cover”.

You also want to make sure you don’t pull off the input cover (keyboard/touchpad assembly) too fast or far, so you don’t pull out or damage the ribbon cable connecting it. But that’s easy and well documented.

The port adapter cards (USB-C, HDMI, USB-A, etc.) do take a surprising amount of effort to remove once installed, though. That’s probably good, though, since you wouldn’t want them to come out when unplugging a cable or dongle — part of the point of having them is to limit wear and tear on the USB-C ports on the motherboard itself (so you can replace a $9 adapter card instead of a several-hundred-dollar motherboard when your great Dane lands on your USB cable). It does mean that swapping port types is not something you’re going to want to do several times a day.

As others have said, the only thing I found tricky or fiddly was attaching the antenna wires to the tiny jacks on the WiFi card, because the wires kind of want to twist out of position. Just took some patience. But newer orders will have the WiFi cards preinstalled.

Any idea if the WiFi card is already preinstalled now? I was tempted to just buy it pre-assembled, then I’m reminded that I can’t customize the amount of RAM, and I don’t want the top-end CPU nor Windows

but am worried that either the pieces will not fit together properly/ I’ll botch it/ I won’t even understand what might not be working.

It took about 15 minutes to get mine assembled, and I was really taking my time. Another 5-10 installing Windows 11 Pro. And a full day setting up Windows 11 to how I like it

It’s honestly the easiest piece of tech I’ve ever had to assemble or disassemble. Truly impressed.

Any idea if the WiFi card is already preinstalled now?

The European DIYs are with WiFi preinstalled - you can’t even select it in the configure process. Framework decided that since many people had problems connecting their antennas, they might do it themselves. Not sure about US, but probably they’ll do this there too, even if not doing it now.

In the US it’s still an option - and there’s no option for having it preinstalled, either. Just had a nerve-wracking 20 minutes installing everything - I don’t have a good track record at this, personally - but luckily I got everything installed and wifi and sound works! (the installation instructions has some strong warnings about not letting the antenna wires touch the sound subsystem). One of the cable guides got detached while trying to get the wires attached, but looks like it’s just lightly glued to the board anyway so the only question was where to put it back.

I’m certainly hoping the EU configs become standard in the US in the future. Snapping the antenna connectors were rather hard too for this middle aged person. I might take up a friend’s suggestion and buy a magnifying glass for next time.

The parts are easy to install. Even the tricky wifi just took a little time. Have an adjustable bright light available. If you are confident and detail oriented, it’s not difficult. My nemisis was the touchpad ribbon. I was careful but somehow it dropped out and wouldn’t stay in the bracket. I’ve ordered a new one. Everyone is very helpful, but you need to be resourceful too. All the info is here. Good luck with your decision.