With this technique, the following peripherals are connected to the eGPU and work at boot and do not disconnect:

My conclusion is that the eGPU (including the USB hub support) issues are mainly caused by a faulty BIOS.

works even better than expected: it also works on a stock Ubuntu 20.04! 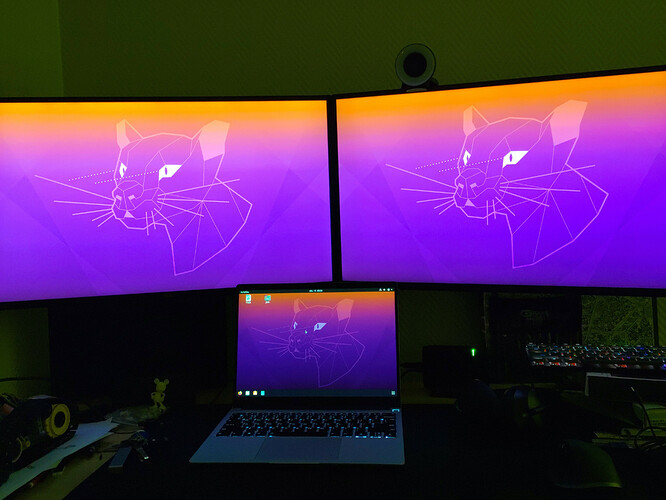 I can confirm the above trick also works with Manjaro 21.2.6 and the Razer Core X Chroma.

My conclusion is that the eGPU (including the USB hub support) issues are mainly caused by a faulty BIOS.

The fact that this needs to be a ‘trick’ means Framework has got some fixing to do.

Ever since I got my Core X Chroma about half a year ago, my Framework does not boot into Windows if I press the power button with the Thunderbolt cable connected. If I make sure the cable is disconnected then attempt to boot, all is well and I can plug in the dock at the Windows login screen to use my external keyboard etc.

I have a Sonnet 750 eGPU (RTX 3070) and I’m guessing you’re having a similar issue with either TPM and/or Bitlocker being tripped and either causing Windows to request to enter in your recovery key or a blank screen all together. It’s a known “security” feature listed on this site around eGPU & Windows 10 security features (https://egpu.io/forums/pc-setup/bitlocker-tripped-on-reboot/). Removal of the TB cable looks like the only real “fix” for now…or manually deprecating TPM/TB functionality.

In my case I am using an Arch derivative, sddm greeter, X11, and plasma desktop. The system wants the eGPU added on the sddm greeter, not before, not after. Pretty much any other timing of plug in else results in kernel panels on 5.18.* with nvidia 515.65. Hot unplugging always results in kernel panic. I have both a Sonnet 550 and Razer Core (not X), same behavior on both, with Nvidia 1050Ti.

I have not tried Wayland lately, maybe that has gotten over some of its teething problems by now…

I’m guessing you’re having a similar issue with either TPM and/or Bitlocker being tripped and either causing Windows to request to enter in your recovery key or a blank screen all together.

I do have Bitlocker enabled, so that’s the likely cause. It’s a minor inconvenience but not unmanageable. Thanks for the link!

Late to the game, but I got a Core X Chroma for my Framework (11th Gen i5) Running Arch. I was having issues, so I decided to do a fresh install. I got the actual graphics card working pretty quickly and reliably, with no issues with that so far. However was having issues with the USB hub on the eGPU and the Ethernet port (which is just a USB to Ethernet adapter, so it inherited the USB issues). I didn’t see this trick, but figured that out as well, and it works. I have found that if I do reboot then the USB accessories won’t work, unless I do this trick. However if I do poweroff wait a couple seconds, and then press the power button, I don’t need to do this (at least I didn’t have to a couple times in a row).

I do full disk encryption, so I plug the TB cable in when I get the the password entry prompt to decrypt my root, and then that works.

I noticed that when the USB stuff doesn’t work, my keyboard would like up before the GRUB menu shows up, then it’ll turn off during loading initramfs, and won’t come back on. Inspecting the dmesg output I noticed issues with the xHCI driver and seeing things that weren’t responding and assuming they are dead.

But following this trick has been pretty reliably been able to make things work so far. Also to those who don’t realize it, if you’re using egpu-switcher to handle the xorg.conf configuration file, you have to plug your eGPU into the same port on the laptop every time, since they all will give the card different pci addresses.

I can confirm the above trick also works with Manjaro 21.2.6 and the Razer Core X Chroma.

I have the Core X Chroma with a 3090 in it and it works great in Windows. But I have yet to get it to work in Manjaro.

Would you mind giving a run down of what you did in Manjaro? Whenever I install the intel/nvidia prime drivers from manjaro-settings and reboot, upon booting the system appears to freeze right before launching GDM.

Glad to see you got it running

@Framework had you all seen this? I could not find any known issues documented around this? It seems pretty easily reproducible with 11th and 12th gen Frameworks.

If there’s anything that you need to help diagnose this for a BIOS update, i’m also willing to help!

My goal is to have 1 USB-C/Thunderbolt cable to rule them all: GPU, external SSD, webcam and keyboard (not using Bluetooth because I need it in Grub).

Uhm- haven’t read much- but this definetly isn’t a good idea.
The GPU is already extremely bandwith limited as is, if you add an SSD, the SSD can hog up ALL the bandwith, and one of them will be severely bottlenecked if both are at load at the same time. Just use the other sides USB-C ports for the SSD maybe!!

Keyboard, and webcam don’t take much bandwith though!

Ive run into an interesting situation on linux mint. Hotplugging works but not as you would expect. I get a display output but everything is running off the igpu. Even more so usb is full functional. If I force disable the Igpu it renders as expected but then the usb and ethernet break!

Has anyone managed to get this to work with Wayland yet? I updated my Nvidia drivers yesterday and now Ubuntu boots to Wayland instead of X11 and egpu-switcher doesn’t work anymore. Even if I force Ubuntu to boot into X11 mode. I tried all-ways-egpu but this didn’t work for me either.

Ive recently installed the beta 3.06 version. On windows it works without an issues. Live booting Linux as a test does not bear promising fruit. Anyone else want to try a full install of fedora as a test? I need to buy an external ssd for testing. I dont want to wipe my current drive.

@Richard_Osterloh I’ve been using GitHub - ewagner12/all-ways-egpu: Configure eGPU as primary under Linux Wayland desktops for Wayland.
It works OK… better than nothing.