What laptop(s) are you coming from / ditching?

I’ve been staying with them for awhile now due to their parts availability. They’ve served me rather well over the years.

A terrible dell inspiron with a broken screen

It is my “it’s OK if it gets crushed” field unit. 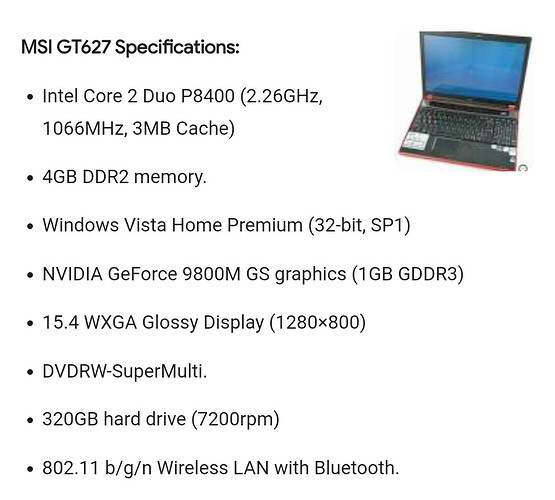 Broken screen bezel (multiple places), battery life is 8 minutes, turbo touch button dead (suspect a driver issue), various parts of chassis falling apart, touchpad surface worn away from use, horrible experience with windows 10, gee what else… Oh it runs hot, weights a lot and is generally ready to be retired.

Yes I have used the heck out of it… Field engineering and communications. And not ever for gaming. Only thing I will miss - ah, give me a moment… Nope can’t think of anything.

I am so looking forward to getting an email saying the Framework unit is about to ship to me.
(update, should ship ~Aug 30th)

I should note that I do have another “laptop” I’m not replacing. It is a beast built for full immersion in water and being able to be run over with a real tank. Of course it cost as much as a small car. Oh, replaceable parts hahaha, nope not really. My insurance company hates it.

It is directly replacing a Purism Librem 13 v2. I bought it for a similar purpose, but parts not being available and some poor design decisions spoiled that dream. (Display cable is faulty, and because the display is glued the only way to fix it is a WHOLE new display, which I bought. Replacement is a pain as you need to solder kill switch leads onto the mainboard, and there is no current guide on doing this. )

I had a pre-order in for a Purism Librem 14, but while I saw many improvements to the design I just do not have enough faith in the company to warrant another purchase.

I still use a Surface Go (until the sealed battery makes it useless), Thinkpad X230, Thinkpad X220T, and a One Netbook Onemix 3pt (which currently has a faulty keyboard). The Thinkpads all still work, and parts are still available. But current Thinkpad models with their soldered RAM and storage (in some cases) are just not the same anymore.

Framework was a breath of fresh air. Exactly what I was looking for all along. I wish them nothing but success so that the dream can continue to grow. I would love it if we eventually get a display upgrade that adds touch and a wacom layer. Or perhaps a new chassis with yoga like hinges.

I’m going to be getting mine to directly replace my 2015 Hackbook Pro.

I’ve loaded it with a Samsung 970 Evo running Manjaro, but with too many proprietary drivers needed to get Linux to work, it’s become more and more of an inconvenience to use.

and it’s getting a bit old and slow.

M1 MacBook Pro is my only and primary laptop, the Framework will be an addition. I needed something to run x86 VMs and I sold my ESXi NUC a while ago. I was initially going to get a Surface Laptop 4 due to the display but I couldn’t ignore the Framework after seeing the initial reviews.

I’ve had MacBooks for the last few years (running Parallels for VMs) along with work assigned laptops (currently an XPS 9500). Looking forward to playing with a Framework.

2016 Macbook that I just discovered has a bulging battery, which probably explains all the other issues I’ve been having with it.

Laptop I’m coming from: ASUS Vivobook X555U
It has a dual-core i5 6200U and a GT940M 2GB; enough to get me through college, but an all-plastic chassis, aging/malfunctioning I/O (headphone jack and speakers mostly), limited upgradeability, and the 15.6" form factor have been bugging me for a while now. because of this, I’ve been looking around for the better part of 2 years for a new personal laptop.

What I was considering: Something smaller, slightly newer (between 7th gen intel and 9th gen intel), with more forward thinking ports (at least USB C, Thunderbolt would have been optimal), and maintains a solid upgrade path. (so if I could find one not fully specced out, I could get a better price then upgrade over a long period of time). Early on I knew I essentially had to give up the mid-tier ASUS models since none of them prioritized thunderbolt 3 or had solid upgradability (wanted dual SODIMM bays not one soldered one slotted). So I shifted to Lenovo Thinkpads. while the models in the era I was seeking were pretty good about upgradability, it was on the decline, and people weren’t SELLING their last true upgradeable thinkpads. This is about the time when COVID hit.

College classes from home sucked. especially when it was my second-to-last semester pursuing a BS in Physics and a minor in computer science, so I started going a little crazy and found a new friend called Ebay. I decieded to cobble together a little test platform eGPU to be used with whatever new laptop I got, giving me a good workstation beyond my full-tower desktop. now I was stuck looking for a Thunderbolt equipped machine. There is an electronics recycler near me that takes in business’ old laptops and recycles them or resells them. and local businesses were starting to get rid of some GOOD laptops. I found listings for Thinkpads and XPS’s with solid specs, and decent upgradability. but I was still wary of things like port positions, missing batteries, and other deficiencies that come with used (and sometimes abused) laptops.

So I graduated college in December 2020, then spend a good 6 months looking for a career. This was definitely not the time to buy a laptop. once I got a job, by sheer coincidence, Linus Tech Tips dropped the video on framework, and I knew that was what I wanted to put money towards. I ordered a little late, so even though I got the DIY edition with the i5, I’m in batch 4. that’s a little infuriating, but I’m excited to get my laptop, start experimenting, and join this community properly!

there’s my story, thanks for reading!

This will be the first laptop I actually own. I have been maintaining a “desktop of Theseus” for over a decade. I’ve been issued a few laptops, but have never liked the concept. Many are hard to work on, work poorly outside of Windows for the first year of their life, etc. I was shopping around for used Thinkpads when I found this laptop.

It has an Intel Core m3-6y30 that was outdated when I bought it in 2016. I’m starting school this fall and the campus IT told me that it’ll have a rough time running exam software. Oh, and the display won’t run 60 fps for videos no matter what I tried. But other than that, it’s still a pretty solid laptop that’ll be in my “backup of last resorts” lineup once the Framework arrives.

Personally coming from a Dell Inspirion 7559, a slightly more gamer focused laptop that wasn’t working for me anymore. Battery Life was at most 40-60 minutes and the computer took 1-2 minutes just to boot to the login screen. The Framework laptop is a very very nice change

Lenovo X1 Carbon i7 circa 2013 or so. It’s been a great machine, but started to really show it’s age lately. Was looking at Lenovos as a replacement, as well as Purism and System76. When I saw the article for Framework, I was (nearly) instantly sold.

Incidentally, I got Ubuntu MATE going yesterday, and it works almost perfectly with my preferred tweaks and applications. Only issues I’ve really had were self inflicted (didn’t have any USB c flash drives or yubikey, so had to scrounge an adapter).

I bought the Spectre with the intention of running Linux on it as I did with my Spectre x360 13t. As is often the case, Linux does not work well with the latest hardware, but in my experience, after a few months Linux has caught up, so I was planning to use Windows for a few months then switch back to Linux. Unfortunately, Linux has yet to catch up to this machine and there are still major issues with the keyboard, touchpad, and audio. I imagine most of this is due to HP doing some custom stuff with their hardware and drivers, so I don’t fault Linux for it.

The primary features I was looking for in a laptop were a 13.5-14" display, 3:2 ratio, non-UHD display (I don’t need that many pixels on a screen that small, it’s just a battery waste), user-replaceable SSD, i7-1165G7 CPU option, and dedicated PgUp, PgDn, Home, and End keys.

I am making a concession on the dedicated keys because I value the repairability and upgradeability of the laptop. Ideally there will someday be a keyboard option with dedicated page nav keys.

Sorry to hear you had issues. This has been dual booting Linux/Winderz since day one. No problems. In fact, I love this machine. Above average specs & build quality… Apart from HP’s needle-in-a-haystack firmware alerts & updates, this has been a joy.

I’ve been using a Thinkpad T480 that I bought since it had all the features I was looking for at the time: Thunderbolt, Ethernet port, great Linux support, and user upgradable.
I was riding it out with this once since its pretty much the last upgradable Thinkpad but when I saw the Framework had all these plus a 3:2 screen I pulled the trigger, definitley going to miss the Trackpoint at first though.

Coming from a Thinkpad X1C6. Still a pretty good daily driver, but not really up to my heavier asks anymore and there’s financial incentive to get a new laptop while I’m still in college, ideally one that will last me a long while. Once I saw Framework I knew I’d found what I was looking for, and the community’s r2r attitude inspired me to clean up my old machine and hand it down to a friend

I am coming from a Surface Laptop 4 15 inch that was a gift. When I saw the direction Windows 11 was going with requiring an online account; I really soured with Microsoft. Then I saw the framework and sold the Surface to a college student who I gave a decent discount to because I am firm believer in paying it forward. As someone who wants to get into the repair industry at some point, I want my tools and actions to support that cause.

Just saying, me too. This was my machine for many years, and the keyboard is half dead (half the keys on the keyboard don’t work). Excellent little machine, and will be keeping it around. So what if it has a 1080p screen and can’t play videos at that resolution?

We are customers who purchased Surface Pro from Microsoft. The device is having manufacturing fault and MS is not admitting it. Know our story here

2012 macbook pro that I used through college and beyond. Thing gets hot, but unibody ftw