(post withdrawn by author, will be automatically deleted in 24 hours unless flagged)

@nrp I also signed up to say just this. Trackpoints are simply the better way to mouse around. They’re simply more ergonomic, requiring less hand movement than using a trackpad.

Another disillusioned Thinkpad user here. I LOVE Trackpoint, and would love to see something like it on Framework in the future.

To be honest though, I’ve actually been a bit disappointed with Trackpoint recently because Lenovo haven’t fixed Trackpoint drift in the 10+ years they’ve owned the Thinkpad brand. It doesn’t seem like it should be a big thing to fix, so this shows that they don’t actually care about it and are probably just waiting for the day that they can get rid of it to save money. If Framework made a Trackpoint style pointer, I would expect this kind of problem to be fixed, and perhaps the actual utility of the nub or software integration to be improved.

Regarding the actual design of the pointer, I think I read somewhere that the Framework devs think the deck may be too thin for Trackpoint to fit, but I’d settle for something like a Nintendo 3DS or Sony PSP analogue nub if it was tweaked to work well for desktop use. If additional features or shortcuts were added to make it work better with modern applications that expect touchpad gestures like pinch and zoom were added it would be even better.

I love the concept, but Trackpoint is a must. My current employer equipped me with Dell without one and I suffer. I’m long time ThinkPad user and the only way I can personally select something else than ThinkPad is the Trackpoint (apart from 15" screen).

Public service announcement for the thinkpad lovers out there.

So after a week, here’s what I’m missing:

What I’m not missing:

I’m heavily keyboard only anyway. My pet peeve with the trackpoint even after 20 years was accuracy and drift.

90% of the time I’m typing. So the tradeoff for me was that that once in a while, not very often for me, my hands need to move off the keyboard, but in return, I get a much more accurate action for something like copy and paste.
10% of the time, I’m browsing the web. If I don’t want to use the key shortcuts, the trackpad is great.

I’ve tried life without a Trackpoint before (when my employer issued me a Macbook Pro) and have determined it’s not worth living (I have a Lenovo USB keyboard velcroed to the macbook!). If there’s any sort of upvote or me-too or other means by which this can be promoted among the Framework folks to hopefully see it happen, count me in.

Another vote, or plea, for a keyboard with trackpoint.

My Thinkpad W520 (circa 2010) is still my daily laptop, thanks in large part to its lovely 7-row, non-chiclet keyboard with trackpoint. And its replaceable components has allowed me to keep it reasonably current, performance-wise. In terms of modularity and keyboard, nothing since has really captured my fancy. Until framework.

I think that framework has stated that a trackpoint is not likely in the current (and only) model, because the thickness of the chassis won’t quite allow for it. Speaking for myself, I would gladly trade a few mms of thickness and a few milligrams of weight for a framework laptop with a thinkpad-like keyboard with trackpoint and good key travel.

Perhaps we’ll see this in a 15-inch model in the near future? Consider this a vote for same.

As a Thinkpad user, since the 700C was released, Trackpoint is a must too. I did purchase one, but I wanted/needed a machine with four thunderbolt ports.
If I were to buy one for everyday use, it would have to have a good Trackpoint, backlit keyboard, and enough battery for a 5-hour cross country flight. (and black, as God intended quality notebooks to be)

I will instantly purchase this laptop if a trackpoint is announced.

I just made an account to post that this is literally my perfect laptop except that it’s basically unusable to me because it doesn’t have a TrackPoint (pointing stick) option. Maybe it sounds crazy, but for me to maintain my current productivity I absolutely need this hardware. I’d even prefer if you leave off the touchpad entirely and just have three mouse buttons for thumb use, but that’s probably just me. I am just salivating over here desperately hoping you will announce a keyboard with a trackpoint. I won’t even wait, I’ll just buy the laptop when that’s announced then get the keyboard separately whenever it’s available. I’m literally begging you!

I wish to mod the keyboard with a track point, just waiting on a response to what interface the keyboard uses to figure out how I would mod it.

Came here to say that no trackpoint was a huge drawback for me when considering the Framework. I ordered one anyway because I believe in this business model, and I want to see it succeed. However, I would be thrilled if an upgraded keyboard with a good trackpoint was an option someday. They are just so incredibly useful, and I don’t think the trackpoint is an antiquated and ignored relic of technology like many believe.

I’m in the trackpoint club. I received my i7 on Thursday, so obviously it wasn’t a dealbreaker for me, but it seems like these forums are full of Thinkpad addicts who are growing increasingly disillusioned with Lenovo and want an alternative. All in all, we’re probably a minority of all the entire laptop market, but a substantial percentage of Framework’s core market. I think the large touchpad and thin form factor has a broader appeal, though, and is probably the best decision in gen 1 to maximize sales.

The advantage of Framework’s design philosophy is that they don’t have to be mutually exclusive in the long run - all it takes is one genius who figures out how to build an alternate keyboard/panel which fits the chassis while replicating the Thinkpad keyboard, and I’ll throw my money at him that very day. In the meantime, the existing design is acceptable, if not my ideal.

+1 trackpoint. Like most of the other posters here, I just don’t use trackpads… if I have to use a laptop that doesn’t have a trackpoint, I’ll plug in a mouse when I can or just use keyboard shortcuts as much as possible when I can’t.

Been using Thinkpads for 20+ years, and the Framework is the first laptop that’s tempting me off them, but not without a trackpoint.

For me the trackpoint along with the physical mouse buttons is key. Center button + trackpoint scrolling being my favorite use. I’ll give the touchpad a shot but for now I’m probably just going to use a mouse, with touchpad as a last resort if I’m traveling, etc. I mostly use a vertical mouse if I’m sitting at a desk anyway as I find the ergonomics more comfortable.

+1 for keyboard option with trackpoint. I hope it will be available in the marketplace later

What keyboard options will be available? Framework Laptop

@nrp Suggestion: Consider teaming up with Justin Wu from TEX. He designed the Shinobi, a mechanical Thinkpad-Style keyboard with trackpoint, that is arguably better than any real ThinkPad keyboard. This might put Framework on track to become a popular Thinkpad replacement.

Having a laptop version of this would make me, and most people I know, switch to Framework immediately. 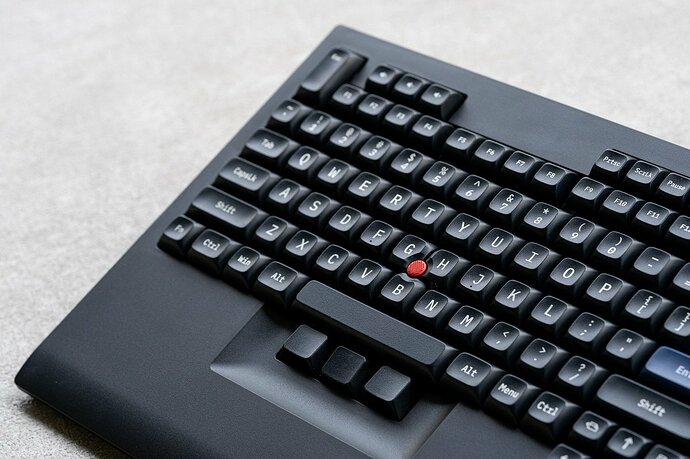