My Framework suddenly is having it’s battery drained at a strange rate.

It started on Sunday, but the battery life went from a good 6-7 hours to only having less than 3 hours. This is with both Windows AND Pop Os.

Also, once in a while, the OS doesn’t actually read properly and I had to wait for the black screen to shut down before I could restart it again.

I am guessing that you are running both OSes from the internal drive. I can’t weigh in much regarding windows, but in Pop!_OS if you run powertop what is it indicating as the discharge rate, and is there a particular entry that is consuming more power that you might expect> I primarily run Pop. Currently, at 84% charge on the battery, my estimated time to empty is 4:20, at a discharge rate running between 10 and 11 W. I have seen others with higher run times, and am still trying to tweak things to maximize run time, I have a 250GB expansion card with windows and my swap on it, which consumes a bit more power, but I am ok with the tradeoff as it has hibernation working.

I’ll be interested to see what you find using power and what we can do to mitigate it.

3-4 hours is what I was averaging on every Linux distro I tried. (I tried all of the powersaving features of TLP and powertop as well.) With the programs I had running I could never get better performance than this.

However on Windows 11 the SAME programs open nets me 5-7 hours.

Give it some time, and Linux will do better on that front. There is some optimization still needed it would seem. My hopes are highest for the Fedora team as they were given hardware to develop towards.

@lbkNhubert Actually, I’m loading Windows off of an expansion card.

And I’m worried because this battery drain just happened out of nowhere.

Imagine, going from 6-7 all of the sudden going to half…

@2disbetter Really? Only 3-4 hours? That seems worrying. But it happened from the start?

I’m going to be honest. The scariest part of this is that this is the most expensive computer I have ever purchased. Usually, I stick with the under $500 range or get an old used computer and run Linux.

@2disbetter Really? Only 3-4 hours? That seems worrying. But it happened from the start?

With what I had open (Brave, Rocket Chat, Dino, Mailspring, Putty, VNC Viewer, VC Code, Crossover, VMware Workstation (was suspended VM), and Steam) I saw ~3 hours from out of the gate, with minor improvements after TLP tweaking.

Under Windows I saw double the amount of battery life with the only difference being Outlook 16 instead of Mailspring, and Crossover was replaced with Terminal and Ubuntu running through WSL2. (which means that technically Windows was running more things than Linux concurrently.)

This is why I run Windows 11 (using WPD and Tinywall) as the host, and run Linux via VM as necessary. I get all of the touchpad features that Windows provides, and all of the hardware stability as well. Until Linux can handle the cutting edge tech in the Framework that will be situation for me for a while I’m afraid.

Your perspective seems to be the problem. The hardware hasn’t gone bad at all.

Linux is the issue.

@2disbetter The thing is, since I got it, I was mostly using Linux and it was running fine.

When the battery drops by half out of nowhere, it’s worrying. Everything is the same too.

Hmmm, it depends on what I’m using (I certainly don’t use this for gaming, so steam isn’t open) I get 5-6 hours on arch. Maybe some of these apps aren’t super well optimized for Linux?

It started on Sunday, but the battery life went from a good 6-7 hours to only having less than 3 hours. This is with both Windows AND Pop Os.

Did you change which expansion cards are plugged in? IIRC, some of the expansion cards can lower battery life, but maybe that was only to do with sleep power drain? idk…

I’m going to be honest. The scariest part of this is that this is the most expensive computer I have ever purchased. Usually, I stick with the under $500 range or get an old used computer and run Linux.

Well, imagine you bought a Surface or a Macbook instead, and the battery was a dud. You’d be SOL.

The whole purpose of this laptop is that you can easily replace anything that goes bad.

I think I generally get around 3 hours. It seems pretty random. I haven’t been able to correlate it to the kind of work I do, but I do the same kind of work all the time. I don’t do gaming, for example. I browse the web and edit text mostly.

It’s odd, there’s this thread where it seems like someone has benchmarked the Framework at 10 hours, which seems unimaginable to me based on the performance I’m getting.

Last night, I suspended with somewhere between 40% and 50% battery left, and this morning it was at 0% and had shut itself down (or maybe had just died).

I don’t know how to tell if my battery itself has a problem. And I don’t want to mess around with config files too much. I’m Linux savvy, but I want the people who really know the innards of this thing to have a solution for me. I don’t want to spend my time building Powertop. I want to spend my time just using the damn thing, and perhaps using it on battery power for more than an hour or two.

There is almost never a convenient one size fits all solution in situations like these. Laptops are enormously complicated devices, and your case is made even more complicated because you’re running a version of Linux that isn’t officially supported.

People are trying to help you, but they cannot do that unless you provide them with the information they need to help you. Unfortunately, Linux is not a very good platform if you’re not willing to get into understanding how it works and how to configure it on a deep level.

It’s very unlikely that a every hardware component has randomly just decided to use twice as much power, and much more likely that something has changed either in the way you use the system or in the software configuration - but to get to the bottom of what is happening, you need to help yourself by helping people help you!

If you want a computer you can just use, dare I say it but Windows is much more likely to provide a trouble free experience for you…

fyi, you can get a 30-50% increase in battery life on this laptop by setting the refresh rate to 48fps. 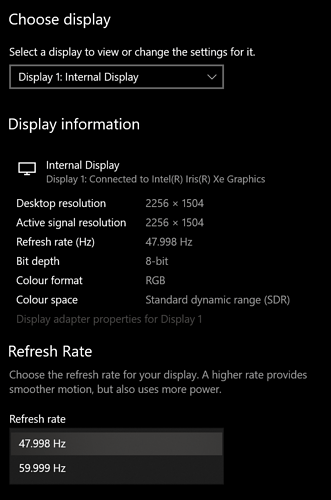 I just tried that, guess we’ll see if I notice any difference. Folks like LTT have a heart attack anytime there is anything under 60hz, so we’ll see.

A post was merged into an existing topic: Linux battery life tuning

@andyk2 Been away from the thread for a while, just read your response. Thanks for the laugh!