I dont have a frame.work laptop yet but I would like to know if it is possible to set a min/max charging limit such as Lenovo has - I dont want my battery at 100% all the time as my laptops are mostly on the charger.

Hi and welcome to the forum

The simple answer is yes

The bios allows you to set a max: excuse the dust on the screen 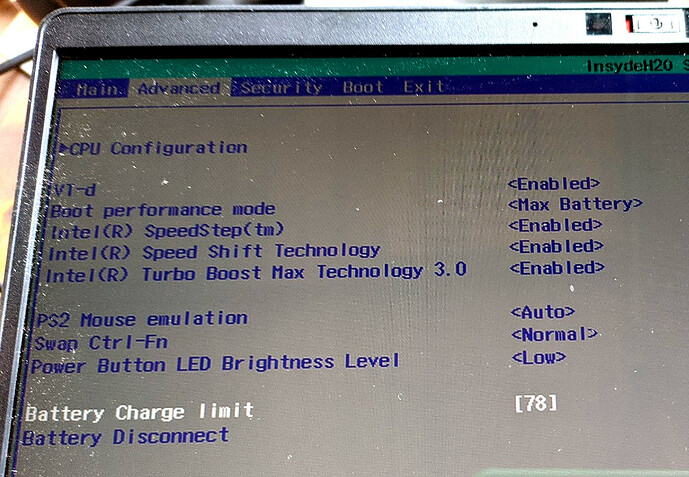 In order to minimize occurrence of trickle charge cycles, you’ll need to get a higher wattage USB-PD charger.

Battery flipping between charging and discharging / Draws from battery even on AC
amoun June 3, 2022, 4:08pm #4

Surly whatever the load is the battery will be trickle charged if plugged in during use?

In order to minimize occurrence of trickle charge cycles, you’ll need to get a higher wattage USB-PD charger.

Surly whatever the load is the battery will be trickle charged if plugged in during use?

The EC seems to have a process to check battery charge level on a regular basis. If current charge capacity < threshold, it turns on charging.

The battery charge capacity drops when the full system load is greater than the wattage the USB-PD can supply.

If you run a combination of, say, Furmark and ( prime 95 cycles, start 2 minutes, stop 1 minute) *, you’ll see a drop in the battery capacity…and charging will toggle.

The higher wattage charger basically closes the gap between its maximum wattage and the system peak load…meaning the battery will only discharge in those relatively rarer occasions that the system is using more than, say, 90w. (If my new USB-PD is a 90W charger)

To my limited knowledge, some li-po battery chargers will look a combination of other factors such as voltage, charging current / internal resistance of the battery (?) to determine if charging is needed. These don’t look at a digital counter of the battery capacity.

So, going back to the “surely”… Unless this is implemented, then the EC only looks at the capacity reported by the battery’s IC to determine if charging is needed or not. So under normal use (without high / peak load), I don’t believe* trickle charge with occur with the Framework laptop.

This is also why Lenovo ThinkPads (and from the IBM days) have the “Reset” / calibration function as a “Battery Maintenance” feature, to reset that IC capacity counter (it doesn’t know the self-dischange delta).

In short, that battery capacity from the battery is always a ‘best’ estimate.

Thanks for that now I ‘need’ to understand the detail.

My simplistic idea is that the battery circuit fed a voltage to the charge controller. i.e. I thought the charge % set by the bios was just a voltage setting. Thereby when for example the voltage drops by say 0.1V it would charge for 1 minute and switch off. Wait for a minute and check again.

Our battery management integrated circuits and system reference designs will help you create an intelligent battery pack that will boost battery life in new notebooks and laptops. Use the interactive system diagram below to quickly find our most...

One other thing that’s missing in the current battery implementation is a charge cycle counter. There’s no way to even subjectively judge the age of the battery at the moment.

Update: Got corrected about the battery counter (below).

One other thing that’s missing in the current battery implementation is a charge cycle counter.

There certainly is a charge cycle counter!

It’s not currently surfaced through ACPI, however, and I’ve requested that it do so: Feature Request: ACPI `_BIX` to report battery cycle count

There certainly is a charge cycle counter!

LOVELY!! So I can get that detail. REALLY happy to see this.

I’ve requested that it do so: Feature Request: ACPI _BIX to report battery cycle count

Did you get confirmation from Framework as to whether the request will be implemented, and by when it can be expected?

Did you get confirmation from Framework

Sorry, the only information I have is that which is in that thread.