Knowing big corporations, this could be an attempt to pull potential customers from Framework to Dell since “brand loyalty” is a thing.

big corporations hate smaller companies that do something better than they can so the typical behavior is to copy and later bankrupt the smaller company before going back to the old model (like Dell can pull this modular laptop off the market like they did with their modular Alienware laptop).

This feels too much like concept cars. Cool in idea and pushing boundaries & expectations, but even if it were ever to make it to market the actual product would be way less extravagant than the concept.

Competition is always a good thing I suppose.

What would be even better for the environment and consumers, is if Framework could work with Dell and other mainstream manufacturers to create industrial standards/specs for expandable ports and accessories. That way products sold by one company could be fully exchangable with another company’s base.

Maybe you can see the “pen” icon on the right side of your title. You can click the icon to edit the title. The below is example of another thread I created yesterday.
Thanks!

@BeeAPeach Could you rename this thread’s title to “Dell announced a laptop concept about repairability”. After chatting with @OldCoastie68 , their permission is “Basic”. According to this discourse document, perhaps the permission “Basic” doesn’t allow the owner of the thread to edit the title.

Edited: I confirmed the title was changed. Thanks.

A fanless design limits processor choice to low power variants, this is not a competitor yet

This is probably my favourite part of the concept, and I imagine that by putting the processor against the back of the lid means when the laptop is docked and the lid is closed it will be just as efficient - if not more so - at dispersing heat as when the unit is open.

Perhaps this needs to wait for efficient ARM and RISC-V processors to work best. I also speculated in another thread that newer designs of monitor may dispense of the backlight - such as OLED, micro-LED and e-paper. These monitors will be thinner, and thus provide space for more electronics in the lid of the laptop. I suspect Apple might try for this configuration in their “air” notebooks because they got the efficient M-series chips now, but at least Dells concept presumably means Apple can’t try to copyright the idea.

newer designs of monitor may dispense of the backlight - such as OLED, micro-LED and e-paper. These monitors will be thinner

The new Macbooks already have micro-LED displays or mini-LED, I can never remember which one is the larger of the two.

I found a video that Linus S, talking about Dell’s Luna laptop on. 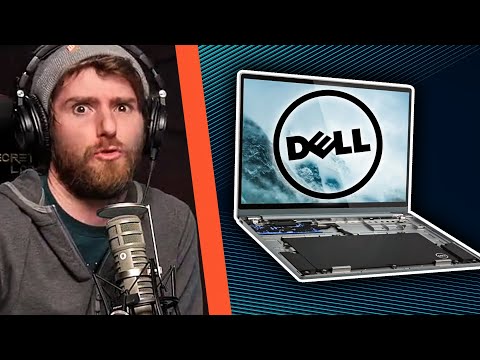 The new Macbooks already have micro-LED displays or mini-LED, I can never remember which one is the larger of the two.

MiniLED is what the new Macbooks have. That’s an LCD panel with LED backlighting, using a backlight array with a large number of lighting zones (hundreds or thousands) to improve contrast. MiniLED also reduces blooming by limiting it to a lighting zone that is now smaller but does not completely eliminate it. Over in the of land of TVs, Samsung’s QLED and LG’s QNED displays use Mini-LED technology, and also use quantum dots to improve the color gamut

MicroLED is a directly illuminated display technology that uses millions of conventional LEDs (not OLEDs) in red, green, and blue. Each pixel has three LEDs. MicroLED displays have the potential of being the best display technology yet: as much contrast as OLED, but with more brightness and fewer problems with screen burn-in. The only commercial large MicroLED displays are things like Samsung’s The Wall and LG’s MAGNIT; they are very very expensive, with even the smallest sizes (which are still quite large) costing well over $50,000.

MiniLED doesn’t create any more heat than a standard LED backlight system does at the same brightness. Extra cooling should not be necessary unless high backlight levels are implemented; that’s going to apply to any HDR display.

MicroLED is too new to say what its eventual power consumption will be.

One of the possible benefits of a design where the processor is in the ‘lid’ of the laptop with the monitor is that it might be possible to design a hinge that connects into both halves using the Framework standard ‘Expansion Card’ system. This could allow the lid to be dismounted and placed further away as required using an extension cable, or to be set up with a different keyboard and mouse as a pocket-sized ‘all in one’ system.