The built-in pointing stick is a nice touch (hint, hint): 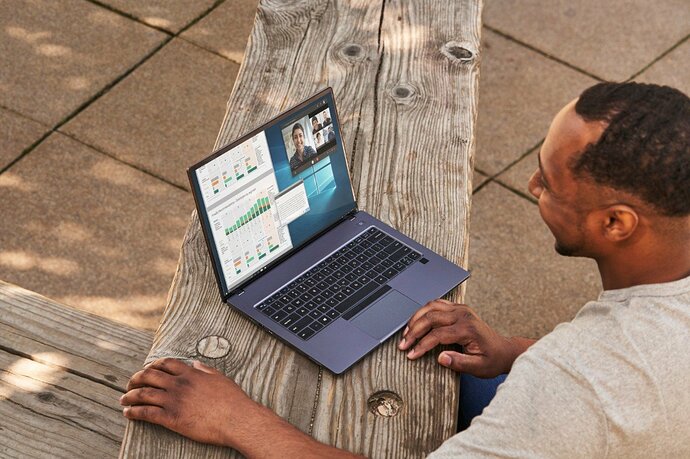 Intel has unveiled the NUC P14E, a modular laptop with high-end hardware. The NUC P14E has a 2K and 3:2 display, a 77 Wh battery, biometric authentication options and an aluminium build. The NUC P14E has more ports than most conventional laptops,...

Looking at those specs this is a yawn fest for me, but the more the merrier. I don’t think we will see a company that embraces the right to repair, product longevity, and cutting edge tech like Framework for a while.

Interesting. They are using the same desktop modular NUC compute elements as their desktop line. Meaning if you upgrade your laptop you can put the leftover “compute element” in a “element chassis” and use it as a desktop.

I think this is a good thing for FW as it validates the concept and I think FW’s implementation is better having both modular hardware and IO. I do hope however either FW or a fan creation comes up with a desktop enclosure.

Looking at those specs this is a yawn fest for me

How so? It seems competitive in terms of specs with the FW

How so? It seems competitive in terms of specs with the FW

It’s limited to 16GB of RAM and is non-upgradeable (it’s fixed to the compute unit), has fixed ports with an interesting mix (two USB, HDMI, DP), and is about a pound heavier.

So based on my limited research it seems like it sits somewhere between the Framework’s hyper-repairability and modularity, and a more traditional solder-and-glue design.

My thoughts exactly Brett. The RAM is the biggest glaring issue. I doubt the keyboard is also anywhere near as good as the frameworks.

It’s limited to 16GB of RAM and is non-upgradeable (it’s fixed to the compute unit), has fixed ports with an interesting mix (two USB, HDMI, DP), and is about a pound heavier.

So based on my limited research it seems like it sits somewhere between the Framework’s hyper-repairability and modularity, and a more traditional solder-and-glue design.

Just looked into it a bit more. It seems that the laptop is ~0.44lbs heavier, not a whole one.

The thing is, this isn’t for you, it’s for businesses and that’s why the tradeoffs are there. It’ll be interesting to see how it’s priced, and how much the compute modules will be down the road

The thing is, this isn’t for you, it’s for businesses and that’s why the tradeoffs are there

Yup. I’m not passing any judgement one way or another. The question was, “How [are the specs a yawn fest]? It seems competitive in terms of specs”, and my point is to illustrate they are materially different in notable ways.

Your point, which is I think exactly right, is they’re not necessarily even competing in the same market segment, so the question may not be that relevant in the end.

But these offerings are notably different in some significant ways.

I work in chemistry so Kg make more sense to me than lbs half the time lol. I can handle that, just don’t mention ounces around me…just had a mixup with fluid oz and mass oz when cooking the other day

I’m just curious about pricing and if Intel can keep their ADHD down long enough to support it moving forward. They’re not as bad as google, but they do tend to jump from project to project. Shoot, just look at the weird AMD + Intel APU combos they did a while ago. Intel flat out gave up on the driver support after a while!

Glad other companies are starting to jump on the modularity train! Still prefer Framework for now though

Glad other companies are starting to jump on the modularity train!

My pessimistic self: “Intel unveiled a concept they had kicking around for years that never got anywhere because now we have Framework applying market pressure towards true modularity in ultrabooks. Big tech is going to follow suit selling competing products at a loss until smaller companies can’t sustain the cost and die, and then go back to its old ways.”

I’m not 100% on board with that take. Intel loves to kick around ideas like this, and it’s the natural evolution of their module design that they’ve been toying with for years.

Usually stuff like this isn’t made to really generate immediate profits, it’s just to kinda give a reference model for other vendors, especially smaller brands that usually rebadge stuff (like every brand rebranding Clevo lol).

I’m also not convinced by the take that the market will use these as loss leaders to bleed out FW. I gotta say it again, this is not a mainstream market. Your mom doesn’t care that there’s easily accessed components, she just wants a laptop that looks nice and has a warranty.

The FW laptop is an enthusiast laptop, though it’s more accessible to a less “hardcore” market. Let’s see what happens moving forward though, it’s nice to see some cool products being released

The carrier board method is always an interesting design (and is probably necessary if they want to update it to Alder Lake+). But I don’t see why a business would pick this over the multitude of other vendors.

It’s cool, but it’s (obviously) limited to Intel hardware and as I think Dave2D said in his Framework vid, it’s a side thing for them, as opposed to the main business for Framework, so they’ll pull the plug way faster on this.