You all might recall a post complaining about the loose hinge of a batch 4 framework. After contacting Framework support again, Framework provided me with replacement hinges. As Framework could not ship these directly to South Korea, I had to use a shipping service company in the US to get them. It took about a week and a half and 9 dollars to get the hinge replacements.

I followed the official hinge replacement guide. I was surprised by how straightforward the process was. I only had slight trouble getting the right small screw out as it was right next to a magnet.

One of the biggest complaints about my machine just happened to be an unfortunate defect that made it out of QC. Twenty minutes later, I had the system back up and running, and the difference was night and day. What felt like a wet noodle is now sturdy as a brick while still smooth enough to open with one hand. It feels just as good, if not better, than my sister’s MacBook air and my mother’s LG gram.

While this is a positive outcome from Framework’s support team, I have some gripes I would like to share.

If you read carefully, you may have noticed that this was my second time contacting framework about my hinges.

The first time I asked if these hinges were standard, I sent this demonstrative video.

r/framework - My one and only complaint after using it for 6 months. 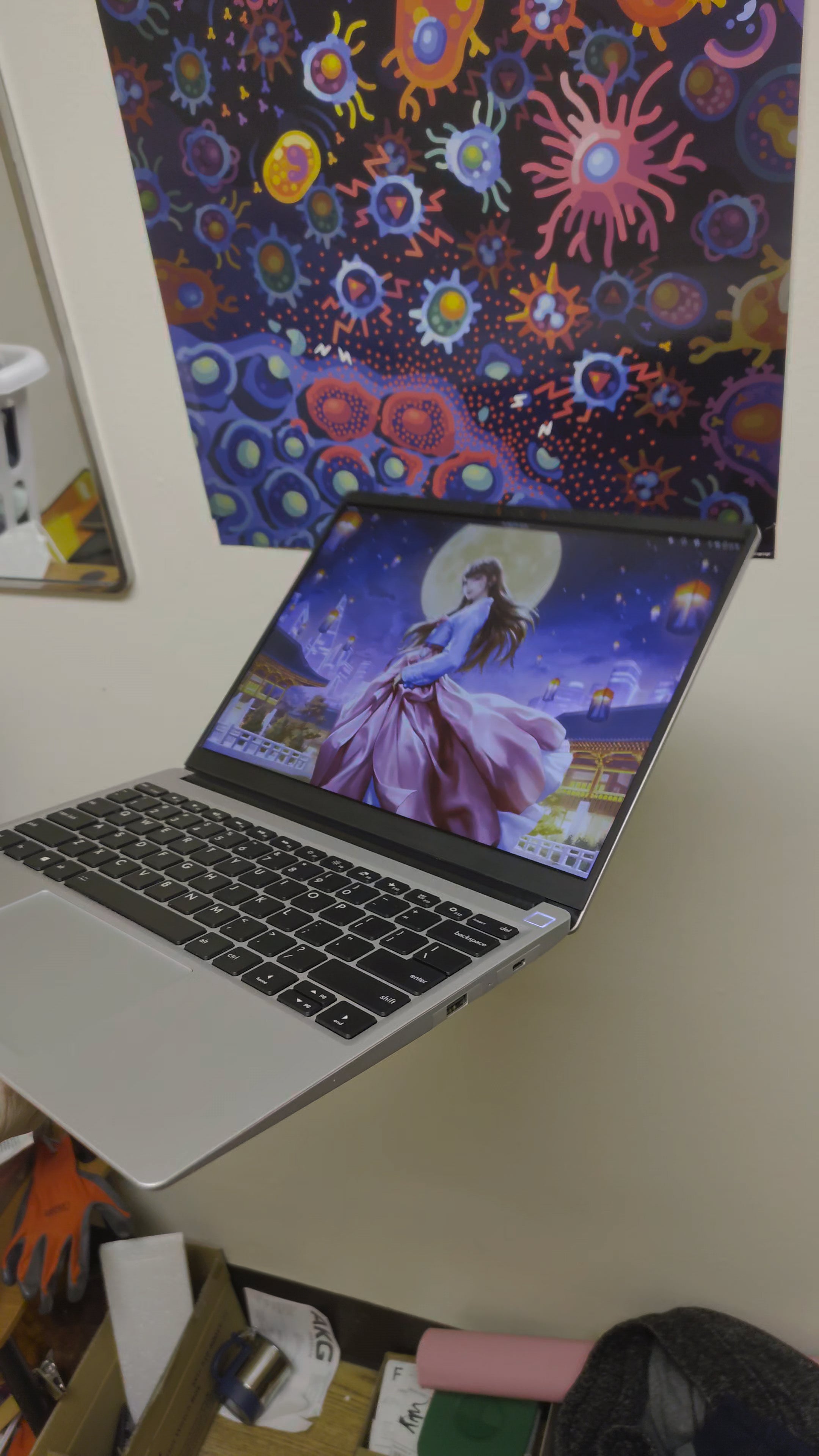 Initially, framework support claimed that this was normal behavior, saying that the framework laptop was designed to be used on a desk. If I was not satisfied with the hinges, they said I should wait to purchase heavier hinges in production. 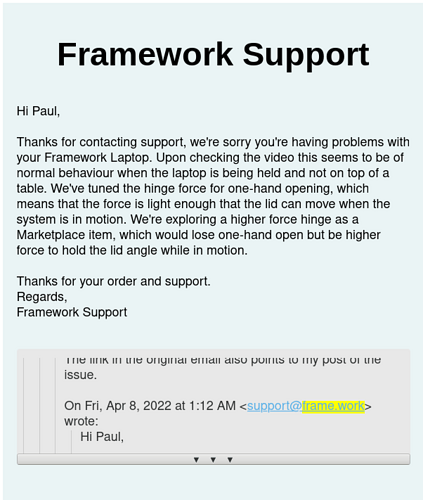 However, the proper hinges I have now will not allow the display to move regardless of how I move the machine. I can shake the device reasonably, and the hinges are solid.

My initial video should have been enough to warrant a replacement, or support should have at least asked for a better example. If I had not gone back to Korea and used my laptop on my bed, I would have used a defective product and complained about its hinges until the new harder ones were released.

Once I convinced Framework a part was defective, they swiftly took action to correct it. But proving effectiveness was not as easy as it should have been, in my opinion. So that is my two cents.

I hope this can shed some light on some of the issues I’ve had. I hope by the time I receive my upgrade kit, most of the kinks will be smoothed out.

I hope you all have a splendid day.

Am I correct to understand that your original hinges ‘degraded’ further and further over the 6 months?

Am I correct to understand that your original hinges ‘degraded’ further and further over the 6 months?

Maybe, but I remember them to be very loose from the beginning. I just never paid that much attention.

My friend was very yikes about it on the first week I got it so I’d say it was defective from the start, and not hinge degredation.

When I realized I couldn’t hold the laptop open and carry it to show something to someone else.
About a month or so after.

Having gone through the hinge replacement process myself, I think it’s about time that Framework owns up to it and just sends a replacement hinge set to any earlier-batch owner that asks for them.

There have clearly been enough cases of overly loose hinges to warrant a better and more formal response from the company.

My hinges are this loose today and they’ve been like that since I first got the laptop. I just assumed they’re all this way by design. So you’re saying if I replace them with new ones they’ll be solid? Right now if I pick up the laptop it flops open exactly like it does in your video.

@Nixingit the laptop screen should not fall over when picking it up. Mine is not super stiff but will only move a little if I pick it up abruptly. If they are like the above video that is not right.

I finally got around to emailing support after having an increasingly floppy screen. It’s not quite as bad as OP’s video, but my screen flops backward about halfway every time I pick up my open laptop, and if I’m walking with it, it’s completely flat after a few steps. I constantly have to adjust my screen from it tilting back with very little momentum.

My initial reply from support is virtually identical to the reply OP received. My followup response was a bit terse, but honestly I expected more than basically, “it’s normal behaviour so it’s not covered, but you can buy it in the Marketplace.”

Hoping to get a better response back from support the second time around.

Sometimes, the floppy screen experience is so complete utter shite that I just don’t even want to use the unit, let alone putting time into emailing support and potentially having to jump through hoops.

And some days, I wonder if I should continue using it in front of other people to show them how crap it is. i.e. Support’s reluctant to provide support goes both ways, both good and bad.

I think the best option about the floppy hinges is to pay out of pocket for the tighter 4kg force hinges from the markeplace. The original loose hinges were a very bad product decision that would cost Framework too much to recall. So, a flawed design on an otherwise great laptop.

@Nixingit - I’m afraid I agree. My issue was escalated but still ended up with the same answer.

This was preceded by the same argument about the laptop being designed to be easily opened with one hand. Honestly I’d prefer the inconvenience of two-handed opening over having to continually adjust the screen angle.

Obviously the cost isn’t a huge factor for the upgraded hinges (although the stock ones I’ve had did get worse, so there’s a flaw somewhere). I’m just kind of bummed that I have to do it in the first place, and that Support isn’t so, well, supportive.

Our internal test for this is whether the lid drops on its own from a 155 degree angle. However, we’ve discussed this internally, and we’re going to loosen the criteria for replacement since it is definitely clear that this isn’t meeting folks’ expectations. If your hinges feel unusually loose, please write in to Support again (starting Monday so we have time to propagate the updated instructions) and we’ll set you up with a replacement 3.3kg Hinge Kit.

Edit: Refer to Twistgibber’s post below for more detail on how we’re handling this going forward.

For clarity, 3.3kg hinges and 4.0kg hinges have different strength and it will be important to understand the difference between the two. When updating our replacement criteria, it will be critical that we have a video of the behavior in Support as a replacement 3.3kg hinge could result in the exact same behavior. We’ve made the 4.0kg hinge available as a purchasable Marketplace item for those that require the additional strength depending on their use-case, but the 3.3kg hinge remains the default hinge on the Framework Laptop. A laptop screen falling under its own weight without external forces is absolutely out-of-spec, and we will work to replace those right away. Other reports will be reviewed, and per Nirav’s comment, we will update our replacement criteria, but there will still be some submissions that will be deemed in-spec and not subject to warranty replacement. It is also important to note that replacement hinges will not have an effect on “wobble” due to inertia exerted on the laptop. Given the thinness of the lid, the weight of the display and components inside the lid, some wobble is expected.

We’ve made the 4.0kg hinge available as a purchasable Marketplace item for those that require the additional strength depending on their use-case, but the 3.3kg hinge remains the default hinge on the Framework Laptop.

3.8kg is a typo and is being worked on. We’re having some issues with our translation system which has reverted to some incorrect copy. It’s currently being worked on to resolve the typo. It’s actually 3.3kg. Our apologies for the mistake.

The difference between the 3.3kg vs the 4.0kg hinge is simply force required to move. The 3.3kg hinge was designed for simple one-handed lid opening/closing. With the 4.0kg hinge, it requires a bit more force to open/close the lid.

@Chris_Eden The bug has now been resolved and the Marketplace now shows 3.3kg and provides a description of the difference between the 3.3kg and 4.0kg hinge.

Our internal test for this is whether the lid drops on its own from a 155 degree angle. However, we’ve discussed this internally, and we’re going to loosen the criteria for replacement since it is clear that this isn’t meeting folks’ expectations. If your hinges feel unusually loose, please write in to Support again (starting Monday so we have time to propagate the updated instructions) and we’ll set you up with a replacement 3.3kg Hinge Kit.

I think this is a significant step forward. In my case, the original video was not sufficient proof of a defect, but my second demonstration was considered definitive proof of a fault.

I think having to demonstrate issues via emails is quite tricky. WIthout being in person or on a live call, it can be hard to show the exact movement or mechanics of an issue.

Either the criteria had to be lowered, or a standardized test method should have been provided.

If I had accepted that my unit was normal(when it was clearly not) I would have thought the hinges were indeed designed to be loose and would have complained about them. The new, non-defected ones sent to me after my second demonstration, hinges are so much sturdier and overall better.

I think having to demonstrate issues via emails is quite tricky. WIthout being in person or on a live call, it can be hard to show the exact movement or mechanics of an issue.

Very true. Under regular use, my screen falls back regularly, which is hard to convey in a “staged” video where I’m using unnatural motions in an attempt to simulate natural use.

Glad they’re addressing the issue after my second email and giving me the benefit of the doubt. I’ll report back after I get the new set of hinges.

I also reached out to support, and they indicated the would only replace the hinge with the 3.3kg one.

I’m pretty disappointed, I must say. The price of the hinge is the same. The entire reason they’re producing different hinges is because we experienced these defects from a new product and raised our concerns.

This whole process around getting support for our devices feels more and more like a major downside of the company. I get the feeling more like “cheap insurance that tries to weasel out of every claim” rather than doing right by the customer. I’d rather have dell support at this point