Very much looking forward to getting my hands on it!

By my count, the i5 sold out on 17 Sep. There was an i5 ordered on 9 Sep that was delivered today, but that’s the last estimate I have on that model. Sorry mate, wish I had better info for the crew.

Don’t be sorry, that is very useful information and I’m very glad to hear about this. However this means some us may not be getting a unit probably until early November

Assembled last night (on stream) with not too much pain (wifi antennas were indeed finicky but having some tweezers helped me hold the cable a lot more steadily). dbrand skin install also went well.

Here’s wishing you all the best of luck with them - shipping, install, and in daily use! 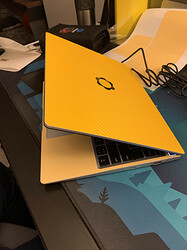 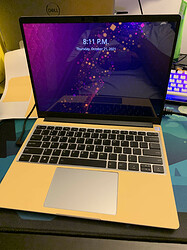 That yellow top is gorgeous!!!

Got mine this morning, didn’t take long at all to assemble, the wifi wires are easier to clip on before you put the card inside. took me a few minutes and I was finished. Loaded windows 11 and the framework drivers and am typing this message on it now. So far very very impressed with everything, The charger is so tiny, and the keyboard reminds me of earlier macbook pro models.

Here’s wishing you all the best of luck with them - shipping, install, and in daily use!

Was awesome to see the assembly on stream

Quite annoyed to be honest… Hope the driver still makes it today.

I guess they decided to tell me to STFU…

As I posted the previous post I got this in the email: 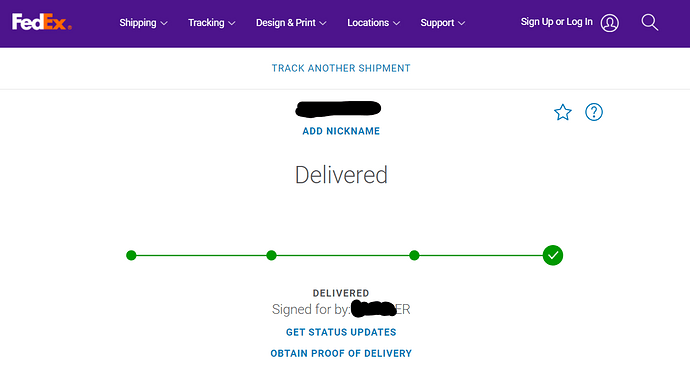 Made a wallpaper for Windows and Linux. It’s not very dark because of the reflective screen. Enjoy. 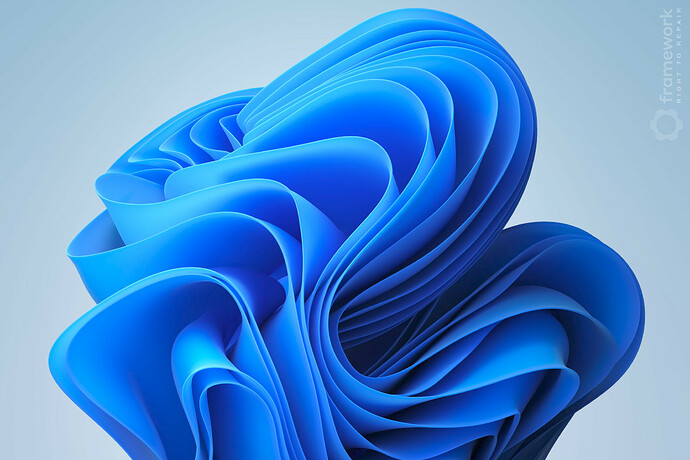 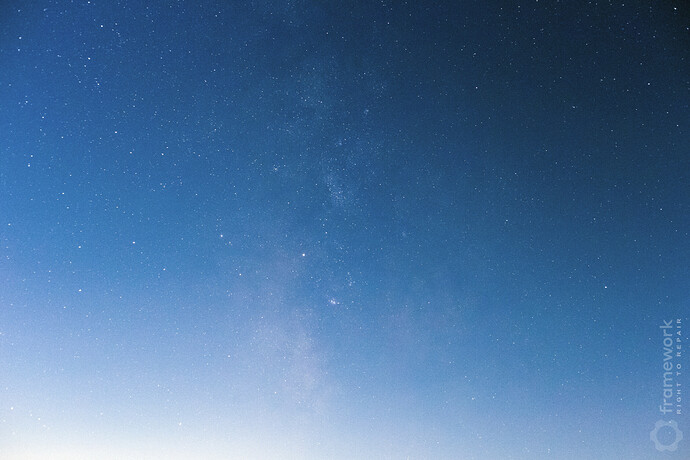 I guess they decided to tell me to STFU…

As I posted the previous post I got this in the email:

This gives me anxiety… Hope you can get your laptop back

This gives me anxiety

Sorry bruh! Not my objective… you’ll get yours too I’m sure

Just positive waves and it will get there before you notice it!

Now I just need to pray that the reshipping company is serious and doesn’t keep my sh*t!

Woo Hoo! I’m up and running!

Disassembly was a breeze, adding the components, except the WIFI adapter was super simple. The WIFI adapter, I highly recommend you read or watch the tutorial in support. Attaching the twin antennas is finicky and super small to work with (especially with my eyesight these days

Also, I ordered the 64GB ram option and the 32GB SODIMM is just thick enough that the inner-most slot, the bottom retaining clip was a little iffy and didn’t want to easily fully latch, but it did after a little coercion.

Booted into BIOS, hardware and components are solid. Disabled secure boot. The bios is fine, but notably I did not see any capability to show SSD or USB drive information. On first boot (with no OS anywhere), most other machines show a list of available drives in the boot menu, even when they don’t have a bootable partition. The framework laptop tells you no bootable media is available which confused me for a second and I wondered if I hadn’t installed the SSD correctly. But once I booted the PopOS USB, that showed up and the install process was flawless. First boot also took a bit longer than expected, which the tutorial warned that more memory, the first boot would take up to a minute. It wasn’t that long, but it was a good 20 seconds - just short enough to avoid panic

Boot from USB for PopOS 21.04 and installed REALLY fast, like <1 minute. Reboot and everything is working (with exception of fingerprint reader, which I frankly never use and don’t care). I bought a full suit of expansion cards (10 of them, all varieties) and tested them all without issues. Inserting the cards is super easy and they snap in nicely. Removing them takes a bit of quick force while pushing the button, they definitely are not going anywhere.

I was a bit concerned about the resolution and scaling, on default install PopOS went to 200% scaling, which is clear and readable but not the greatest usability. At 100% it’s “tiny” but I could work with it (as a comparison, I have a 4K 15" laptop and no way can I used that at 100%). My development IDE can bump the font size to something more agreeable if needed. Right now, I’ve enabled fractional scaling and switched to 125%, and I don’t see any noticeable blurring or font issues; I’m going to leave it at the scale for now and see how I like it.

My main concern was the keyboard, I’m coming from a Thinkpad X1 Extreme which has arguably the best keyboard in the market, but I also have a Thinkbook 13s, that I’m selling because the keyboard is so “meh/mush”, this is to be it’s replacement

I am pleasantly surprised. It’s as good as my work XPS 15 (latest generation) maybe even slightly better – seems like a deeper travel. If the keys had a slight scallop like the thinkpad, I’d be in heaven! That’s my recommendation as an alternate keyboard in the marketplace.

I’m trying to use my new laptop as a Linux daily driver; I have never fully embraced “desktop linux” (years of command line) so I’m curious about the experience. I plan try and load Steam just as an experiment on game stability for linux in general, but obviously this is not going to be a gaming platform for me.

So great job Framework, I’m really happy. Keep up the great work. My future wish list would be scalloped keyboard option and an Ethernet adapter as an expansion card. I’d even accept if it protruded a bit just to have it available for those times when I need a hardline connection for IT operations. For now, I’ve got a USB-C adapter.

A very satisfying start to hopefully a long relationship!

The gang’s all here!

Gonna build it out and install Windows a little later when I get home. 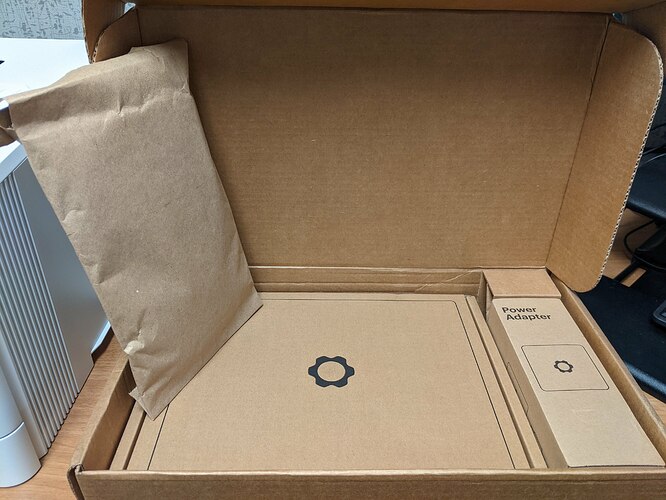 Its almost 7pm and it’s not even “Out for Delivery” yet. I somehow doubt that it is “On Time” 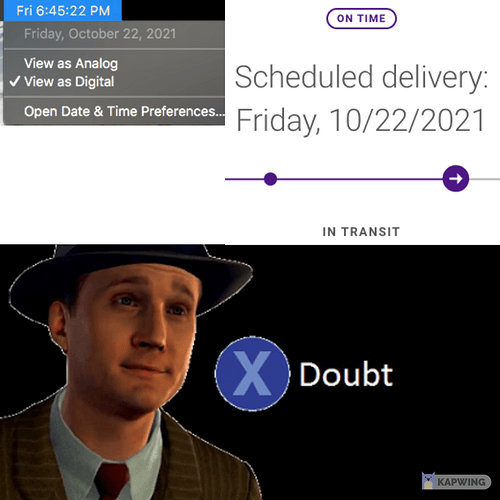 Edit: Now it says “Potentially Delayed” with no ETA.

Got the laptop yesterday! Feels higher quality than I expected! The only minor nit I have is the display seems to have a tiny bit of a curve – though maybe it’ll flatten out after some time in my bag.

I set up Arch and everything works with the exception of bluetooth where it still only appears after a cold boot.

I somehow doubt that it is “On Time”

My theory is FedEx never received so much consistent business, resulting in overpromising and underdelivering. Mine was supposed to get in today (NJ-KS) but called it a night an hour away. Whatever, tomorrow should be fun.

@Tan_Ho I was on the fence about getting a skin, and you aren’t helping!

Keep up the faith, everyone!

Has anyone with a card charge from 14 Oct gotten a shipment notification yet? Still haven’t seen anything beyond getting charged

It’s a mid i7 model, if that makes any difference.

Just got my Framework today!