I think someone just watched the Gamers Nexus Video on the Steam Deck. It could be. The fans don’t sound as loud when propped up, and since the CPU is “cooler” the fans are not running as hard. But not like it’s silent or anything like that. I wonder, is there a way to get fan speed out of the laptop? Like it should be monitored…

Just got done opening it up. Nothing melted, and I put the back of my finger on that area and it does not feel any warmer than the surrounding areas. So maybe it’s just that back left port?

Ok so I got my FLIR one in about two days ago, and I did some looking at the board while plugging and unplugging the eGPU. At one point the temp got up to ~150c it started to come down to the mid-80s and never went back up again. I tried multiple reboots/plug-in/unplugs and could not get it to happen again. Later in the footage, I captured it ends up going down to the mid-50s low 60s. Here is a link to the part where the chip got spicy. Sorry for the fan noise. 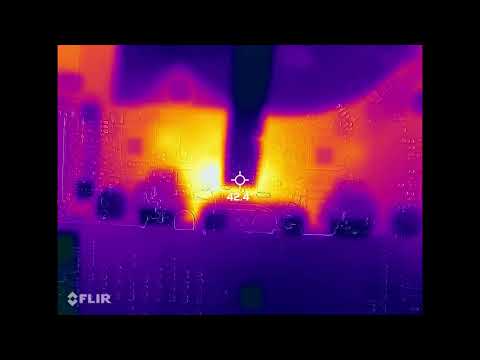 After using my framework for around 24 hours, I opened it up and noticed a small round spot right over the same spot from this thread. To (hopefully) prevent mine from outright melting like what happened here, I fashioned a small heatsink just to add some extra thermal mass to this area to absorb and spread out some of the heat.

Note that I don’t believe I’ve done anything special with it. It’s been connected to an Anker 575 USB-C Docking Station since I received it.

Note that the thermal pads added to the top aren’t really meant to transfer any heat; I just wanted something to add a bit of pressure to that area to keep the heat sink in place if the adhesive that is on it wasn’t enough. 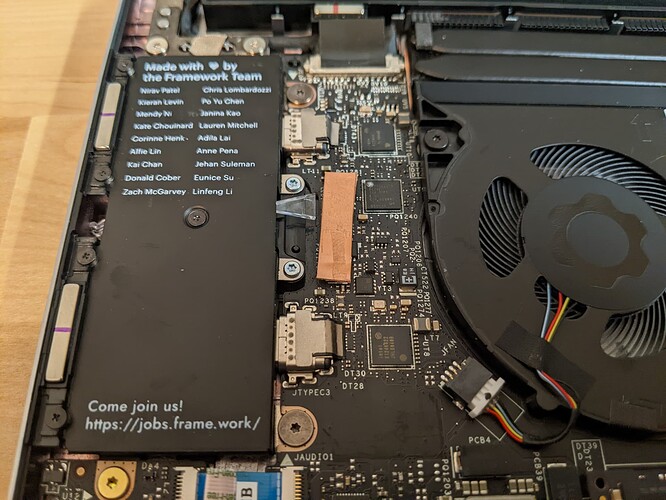 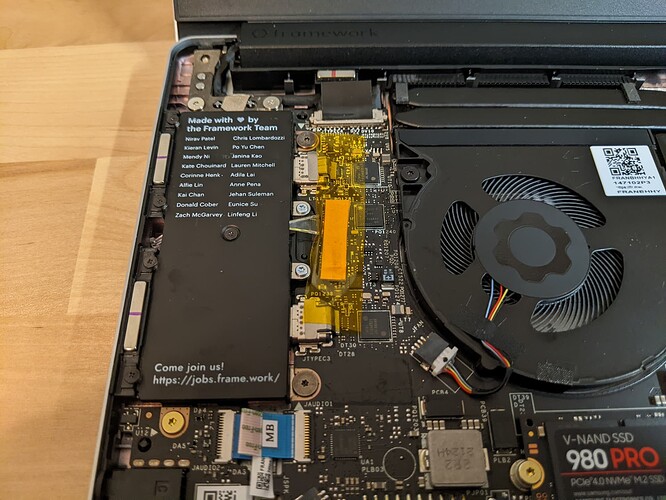 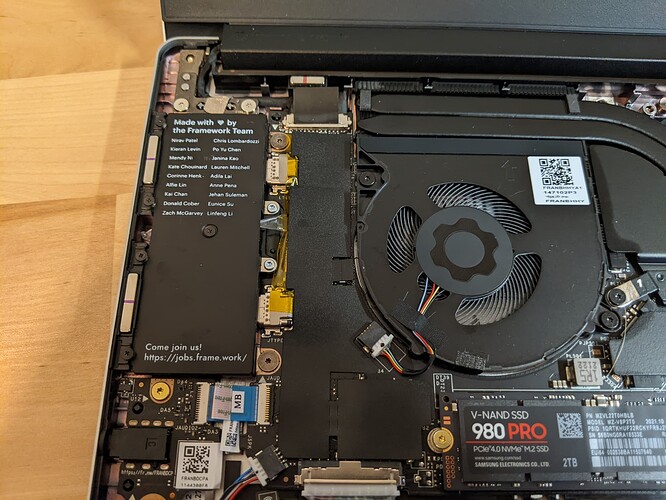 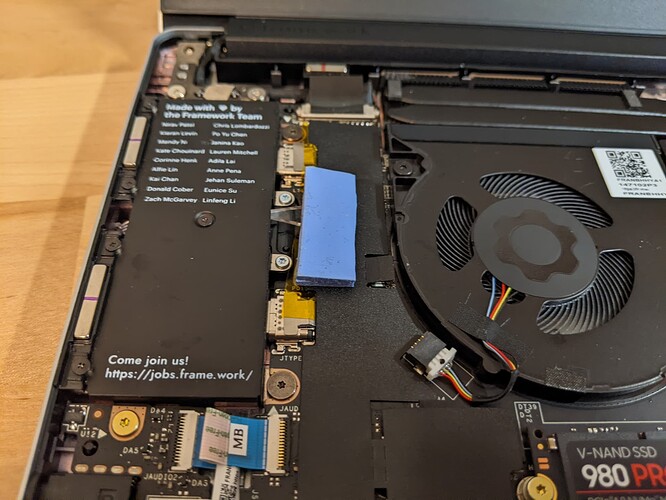 Welp, now mine has done the same thing. Mine just turned off while sitting there doing nothing but charging and viewing a remote desktop session. Then it wouldn’t turn back on, instead blinking red LED codes 4, 9, 10. I’m already in contact with Framework about a replacement motherboard but found this thread afterwards and wanted to share since this seems to be some kind of design flaw and I’m worried my replacement board will eventually do the same thing.

When I get the replacement board I will do a FLIR comparison test of charging a low battery to see which MOSFETs get how hot – maybe the top left port’s MOSFET isn’t being driven fully saturated for whatever reason. Can each person with this melted plastic report what port they were primarily charging with? (Assuming top left) 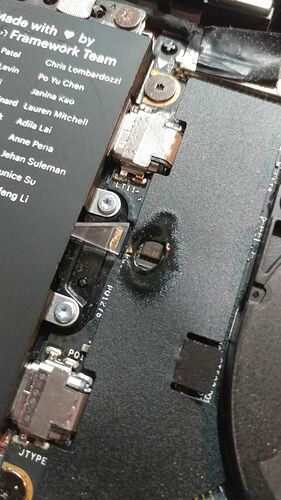 @RandomUser I think early in the conversation @nrp did say that they were looking to get an affected board back to send to the manufacturer for fault analysis. I can only assume this is still ongoing, or they are still working out what can be done about it.

@RandomUser We are extremely transparent and are not strategically or intentionally avoiding a response on this issue in any way, shape, or form. We’ve had a very small number of this happening (single digit) and we have worked with customers to obtain these mainboards and return them to our manufacturing partner in Taiwan for full review. We have not received the full results of this investigation as it is still currently ongoing.

If there are any other instances of this happening, please contact Framework Support immediately. Thank you.

I think Framework is handling this very well IMO @RandomUser we just need to be a bit patient for the analysis on this issue. Writing out PSAs or whatnot is something you do once you know the actual information and not speculation.

FWIW, sending a support email to get a replacement on this issue was by far the least painful and easy RMA/replacement process I have ever gone through. I just sent an email with the picture I took (same one I posted here), got a response very fast that it was being looked into, followed by another email letting me know they’re sending me a new board and a return label to put the old board back into the box once I receive it. Didn’t need to jump through any hoops – a very refreshing experience.

That’s fair I suppose, can’t really argue with that.

I will also say, due to Intel being used and how awfully power inefficient they are, this laptop is a real fireball sometimes when I’m loading the CPU. I switched back to my previous laptop (Ryzen 4500U) while my Framework is down and got reminded how much more quiet and cool that thing ran with the same workloads and with much longer battery life even though it’s the same Whr and the laptop overall was just a cheapie with crappy build quality.

My personal speculation on this issue is that when the laptop’s CPU is heavily loaded the much higher heat creep around that area near those MOSFETs combined with high current load through that MOSFET while charging at the same time might be cooking that specific MOSFET. In my case, the laptop finally gave out while it was sitting on my couch which was also a probable contributing factor.

IMO, to give this issue a good stress test, a laptop being pegged at 100% CPU should go through an entire charge cycle while sitting on a couch or other cloth. Can also be clothes simulating a lap or whatnot. I think its reasonable to expect a laptop to not nuke itself while being used on a cloth surface considering a lap is a 100F heater with cloth on top of it lol…

Anyhow, as I mentioned when I obtain my replacement I will perform FLIR comparison shots of charging and heat and post them here. I speculate that charging on the right side is a lot less stressful on the components due to the distance from the hot CPU, not that we should have to charge on the right side only lol, but it will be a good jumping off point for research.

@RandomUser If there are only single-digit cases of this happening, I don’t think that warrants a PSA. It would come across as warning that their product is dangerous and it isn’t. I trust that Framework will replace damaged boards under warranty and if it is a manufacturing flaw, they will correct it ASAP. No more needs to be done. Why put out a PSA on an issue that has thus far affected less than 1% of users?

We don’t know what the root cause is or if there is a fire risk. Putting out a PSA that implies otherwise does no favors for public safety. I am not advocating for a NZXT response of just ignoring fire hazards (that was shoddy engineering and they should be ashamed) but I don’t think that is what Framework wants either.

Here’s a thought. If it happened twice for the same user, instead of two faulty mainboards, could it be the user’s power brick supplying too much voltage?

PD is a negotiation. It’s not just some voltage you can supply if the other side doesn’t want to receive.

Supposed to have some protection mechanism to disconnect:

That doesn’t completely rule out that the particular device the user is using doesn’t have a fault or bug somewhere, or some weird incompatibility that we don’t understand yet.

It’s great theorising on what might be going on, but ultimately Framework know what engineering decisions they made and why, and they are currently conducting an investigation with their manufacturer. The right thing to do is to wait until we know what the actual root cause is, then I’m confident Framework will take appropriate action.

Until we actually know what the problem is, and the circumstances in which it happens, and the potential number of users affected, it seems inappropriate to create panic. So far I can only see two or three people reporting this, and it seems that Framework have only single digit numbers of reports, which I suspect is significantly less than even the 1% you seem to be upset about. It is very unfortunate that it’s happened twice to the same person, but there will be a reason and I’m confident it’ll be found in good time. Twice to the same person does tend to imply it’s something that they’re using or doing, but we simply don’t know yet.

Yes, because at this point, it looks like we’re going down the path of business as usual, with no mention of “what to look out for” to minimize the chance of this heading down to the point of destruction.

If it were clear on what the issue was and what created this issue, then yes, I would support a PSA but realistically, we don’t even know that much. Presumably Framework is aware of what that particular IC does and thus what systems are involved by then we fall into the problem of “correlation does not equal causation”. It’s not that I advocate not informing customers/consumers, more that I don’t see what purpose such information could serve without some sort of action customers can take to prevent this behavior or mitigate it.

I’ve given up on the PSA ask. (“Point taken” in earlier comment) i.e. I’m just going through the process of responding to quotes.

Fair enough, my apologies for beating on a dead horse then

Panic is a self-create state. It’s not something you can hand out. Each person handles information (your brain I/O) differently. The notion of “create panic” is one that undermines others’ ability to handle information while having an emphasis on self-deciding for others.

Unfortunately, if the press has taught us anything in recent years it’s that the population is becoming less able to independently process information in a rational and impartial way, and panic or anger are increasingly common responses even to the most inert of messages, phrases or even words! As a result, any organisation has to be increasingly sure of itself whenever it sends out any communication

Will you be providing us with an update in this thread once your team hears back from TW on this subject? I am very curious to hear the results and don’t want to miss an update.

@Andrew_Flickinger Of course. We’ve shipped four affected boards to our manufacturing partner in Taiwan. The chips are being decapped and analyzed.

We’ve shipped four affected boards to our manufacturing partner in Taiwan. The chips are being decapped and analyzed.

Once the process is done, if you are able to share pictures and technical info it would be quite fascinating

We have not received the full results of this investigation as it is still currently ongoing.

No conclusive evidence of any cause. Investigation is still on-going and we have not received another case. We’re not ignoring this issue as we have only 4 mainboards returned and the results are still inconclusive.

Hello everyone. Our supplier for the mainboard has done their analysis and sent the MOSFET component that failed to the supplier for that part for further analysis, but as per my last message, we still do not have root cause.