E-ink technology is widely acknowledged as a means to save vision. E-ink monitors are sold for almost eight years by Dasung and recently Onyx started to product such monitors.

Many people are expecting E-ink laptop. I read comments below the reviews of E-ink monitors and just posts. Man by name Alexander Soto even founded a community to construct such laptop. He says, that he is going to use Olimex TERES-1, an open-hardware laptop (it is a kind of a predecessor of a Framework laptop).

I bought Dasung monitor six years ago and now it’s lifespan has ended: it works with terrible ghosting (traces of previous images). Very imperfect technology, but absolutely necessary, because it is just like paper, without any frontlight. Now I ordered another monitor. The problem is that it is very pricey. And it would be much more practical just to replace display instead of buying another monitor.

I just wanted Framework ingineers to take into account that such technology is highly demanded.

One word, no. Why on earth would anyone think about installing a weird display that has not point in a laptop. It’s going to be way too expensive getting a suitable panel, adapting standards and then having a less than optimal experience. Tell me how many people want a e ink display?

Not even thinks about it but tries to make it real. I’ve written about it (and about the most important advantage of e-ink display as well). If you want a number of people, I cannot tell it to you. But who could tell a number of people who wanted such a laptop as Framework?

What are the advantages to a e ink display?

It is safe for eyes, because it has no frontlight and looks like paper. You can look at it for hours and have no dry eyes, headache and other things which appear while looking at lcd for a long time.

I can see what you mean with the health benefits of an e-ink display. There are also significant power savings when using such a panel. However, refresh rates are dismal, and this makes things like scrolling a web page, watching a move, or playing a game essentially non-starters.

In short, while I like the idea, I am not convinced the technology is at a point where this is going to be functional enough. Right now it just means too many compromises.

But I’m hopeful to see improvements and I’m not against it.

I like e-ink screens in my e-reader, but I wouldn’t want to have one in my laptop

Of course, E-ink is not as fast as lcd, but it has made a huge progress in the last years. Watch videos of Dasung and Mira monitors. Of course they are not for gaming. Mostly they are for working with MS Office and browsing. Watching videos is also possible. Usual e-readers are very much slower. It would be a great option (as I understand, having an option is what Framework is all about).

I’m intrigued by the idea of having a 13.5 inch e-ink display in the Framework. It’d be a hell of an R&D cost, considering the size and relatively uncommon aspect ratio, but I’d appreciate it for the power savings.

And suggesting you can watch videos is true…technically

Users can already buy e-ink tablets and use them as a secondary display, I see no need to spend R&D on a feature a small subset of people may genuinely enjoy

Spend that R&D on QD-OLED instead please

Even though all the benefits outweigh the risks, how much would it cost?

I’m intrigued by the idea of an e-ink display. The display is the biggest power draw and e-ink really sips the power. It wouldn’t be usable for multimedia, but if I plan on traveling or camping and just need to be able to check my email and read the news, it’s an ideal choice.

But it does come down to price and compatibility. If it’s more than $150, it’s less hassle for me to buy an external battery. I’m curious how you’d be able to find the market to defray manufacturing costs. A 3:2 ratio self-install e-ink display seems extremely niche.

There is no market for this

People say they want it but they don’t. I’d bet most people like the idea of what e-ink can do without ever knowing what it’s limitations are beyond a technical sense (i.e. how it feels to use it)

There would be no smooth scrolling, full screen refreshes every time you want to change the slightest thing would get real annoying real quick for me at least

And for what you have described-checking email and reading news? Just buy an e-ink tablet

I’d consider this for a Framework, where I can swap screens for a weekend then swap back, and partially just for the bragging rights. I can’t imagine any other platform (except replacing my old kindles) where I’d even consider it.

This would be a very niche product with limited appeal — although I can imagine some people who would like it would really like it —, but the beauty of Framework is that a third-party could produce such a display as a drop-in replacement for the Framework display (modulo any display-controller issues).

A good, full-sized eInk display with a similar form factor to the Framework’s current display, produced in small quantities with mostly off-the-shelf parts, would no doubt be spectacularly expensive. But I could imagine a project to take used/refurb Kindle displays or similar, mount them in a giant bezel with a controller/adapter that lets the motherboard talk to it, and acts as a drop-in replacement for the existing display (smaller display, but keeping the overall laptop form-factor and functionality). (There are some similar projects on CrowdSupply, like e-radionica’s Inkplate displays. I don’t know how the thickness of eInk displays compares to LCDs, though.)

That said, most people would probably prefer an external eInk display that they could just set in front of or next to the LCD display when needed, without seriously limiting the display capabilities of the laptop otherwise.

Actually found out on the latest WAN Show from LTT that this does exist…it just costs $1,500 which is just insanity for a 25" display

I hear people discounting the entire Idea that this could be a good experience, but all the examples are how eink is not suited for fast refresh. to redesign the UI to favor mostly full page refresh would be tough but for research/reading is not too hard: there’s an app for that, writing is the primary thing this eink laptop screen would be good for, productivity not related to multimedia would benefit from fewer distractions. for the majority of multimedia, a full TV better or smartphone is more than adequate. Do every single one of our devices really need to do everything adequately, or should some of them do fewer things but do them really well?

When the device in question is known to be good at a multitude of tasks…yes, yes it needs to be as good as the rest

It’s not just consumer workloads that would suffer, basically everything except the act of reading and writing would suffer

So it’s not that it must do everything well, it’s that doing 2 things well and everything else sucks is the problem

It seems a company called ‘modos’ is demoing their e-ink display technology, which they’ll be using to make an e-ink laptop. 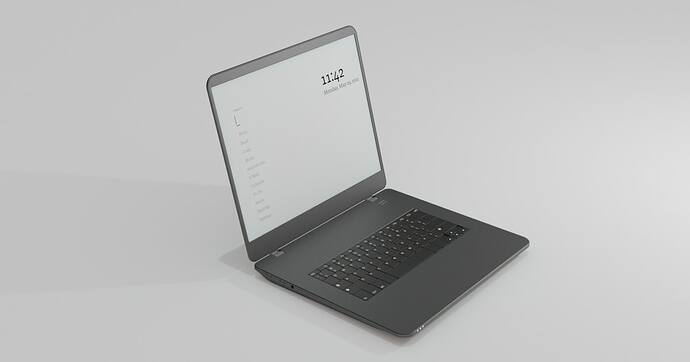 The Paper Laptop from Modos has a black-and-white display, making it the perfect device for distraction-free work.

And hey, That’s a framework laptop they’re using to demo their display tech! 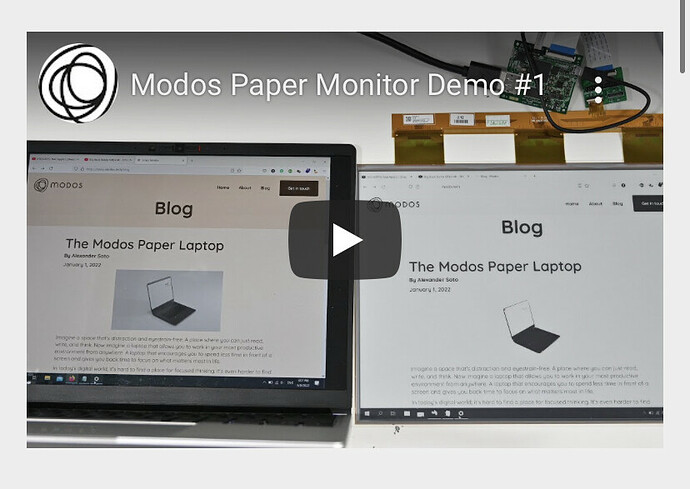