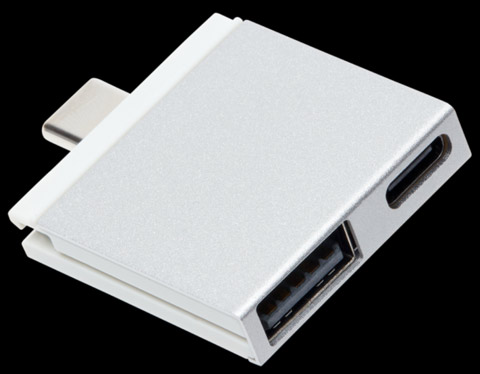 The idea is simple: connect the (internal) USB-C to the USB-C on the outside and also the USB-A.
Now, granted, you can only plug in one thing at a time. But what if you run out of USB-A ports or USB-C ports?
This one let you connect either of them.

Alternatively, put aTUSB8020B on it.

So are you going to build one and provide the details.

So what would happen if something was plugged into both at the same time? Someone is bound to do that.

So what would happen if something was plugged into both at the same time?

The card should self-destruct. The user is not fit to operate it correctly.

…ok, maybe a re settable e-fuse or something.

The user is not fit to operate it correctly

Yes I can imagine such a mistake, especially by a third party. I suppose in such a situation it would be best to remove the card whilst not in attendance or better maybe not have such a card to begin with.

It would seem that in a stationary position, like at home, a hub would better serve and whilst travelling I’m pretty sure four swappable cards will suffice.

Apart from the fact that it would be obviously very dangerous if you were to connect two things at one (especially a power supply and a 5V device), I don’t think this would really work anyway, as T junctions inside USB super speed lines probably degrade the signal way too much.

Alternatively, put aTUSB8020B on it.

That’s one valid option, but I don’t think there’s enough room on the PCB.

People have been trying to design this for a bit now, it seems to be possible electronically but mechanically it would either not fit or stick out. (which doesn’t look amazing)

I’d just alternatively design a holder for some Expansion Cards and carry that with you. It doesn’t take up a lot of space.

Even though from the outside, it looks like such a thing could be possible, even a single USB-A receptacle takes up almost all of the internal volume of an Expansion Card. You can check this by opening up one of your USB-A Expansion Cards. There is just barely enough space for two USB-C receptacles to fit side by side, but not enough to then also add the circuitry needed to make both functional.

So, fun fact about USB: the way they handled backwards compatibility in USB 3.x was to… not be backwards compatible, and instead just have separate pins for 3.x and older devices. And the 2.0/3.x split was even carried over into Type-C, which still has dedicated low-speed pins.

What this means that you can effectively shove two devices into one port without a hub or mux, by…

I don’t know of a solution for the first dealbreaker, but the second one is actually fixable! Turns out there’s silicon specifically for adding 2.0 pins to a 3.x-only port (and apparently those exist). It’s called the VL670/VL671. Since the expansion card only goes in one way, and we’re probably already breaking spec 10 ways to Sunday, we probably could also omit the 3.x lane mux on the expansion connector and get away with a really janky two-chip “”“hub”"".

Note that I have not validated or even tried wiring up anything this way. But it at least makes more sense than putting two ports in parallel with one another.

Using a usb 2.0 hub would probably be more compliant than a usb 3 to usb 2 converter chip and the hub chips are similar size if not smaller and probably more common/cheaper.

Still, this will be very difficult with the space available, the 3 connectors will use up pretty much all of the PCB space (if they even fit).

I wonder if the either/or function could be done mechanically, either with a little either/or door you slide, or perhaps a rocker that would block the port on one side when something is plugged in the other.

People have been trying to design this for a bit now, it seems to be possible electronically but mechanically it would either not fit or stick out. (which doesn’t look amazing)

I’d just alternatively design a holder for some Expansion Cards and carry that with you. It doesn’t take up a lot of space.