Arch Linux on the Framework Laptop

Today, I did a full arch upgrade and reboot. This included kernel 5.13.7. This kernel was not working with bluetooth previously. Now, having had paired and used two bluetooth devices on the older kernel and upgrading to the new kernel, my bluetooth devices connected instantly and work just fine.

For example, in my case on Fedora 34, I see the following result by some command. I guess Arch Linux has equivalent commands to check the package released version.

In Arch 5.13.7.arch1-1 the last digit would be the package relative version, which is where you’d be apply patches between stable releases.

However nothing has been patched in the Arch kernel. 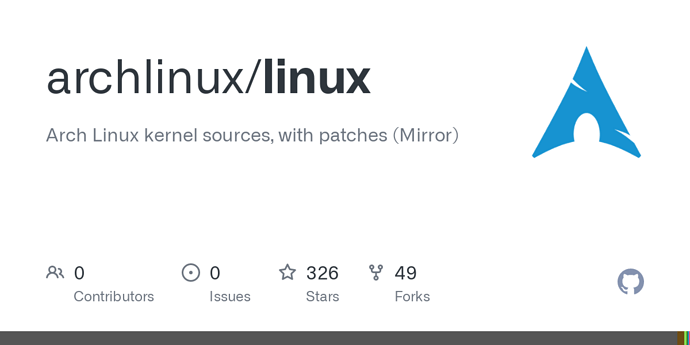 There is some bluetooth patch for USB devices applied in 5.13.8 though, but not sure if relevant.

I have started on the Arch wiki page for the framework laptop. I currently have a pre-production unit so I’m not super sure what issues I encounter is present on the actual releases. Feel free to edit and I’ll move it to the laptop pages within a few days.

My current issue is that I seemingly can’t enable the TPM from the BIOS settings and it doesn’t produce a /sys/kernel/security/tpm0/binary_bios_measurements file on boot. If anyone has one available please upload

Right click doesn’t work on the version of libinput currently in Arch. You’ll need to downgrade to 1.17.1-1 or upgrade to a version that has this change: quirks: add F

Arch has libinput 1.18.1 which has this issue fixed.

I have started on the Arch wiki page for the framework laptop. I currently have a pre-production unit so I’m not super sure what issues I encounter is present on the actual releases. Feel free to edit and I’ll move it to the laptop pages within a few days.

I’ve added identifiers for the non-vPro AX210 card to your page - marking bluetooth as untested for now, since I can’t get it to work with kernel 5.13.8 but in theory the fix has landed.

Just thought I’d share that I installed arch Friday night and have been really enjoying my time with the framework laptop since then!

Some snags I ran into:

Stuff I did (mostly yesterday so I haven’t kicked the tires on these settings much yet fwiw) after installing:

I haven’t used bluetooth for anything in like a decade so I haven’t tested that, but wifi works great so far with default netctl and wifi-menu installs – although I did get some warnings from wifi-menu as it launched, they seem to have gone away today.

The only issue I’m noticing so far that I didn’t have on my x250 is a weird one. I was hoping that disabling self-refresh would make it go away but I’m still experiencing it today:

Once in a while firefox will seemingly freeze up and I won’t be able to scroll the page – watching htop when this happens doesn’t show any special load (my load average stays well below 1 in htop, and I have 32GB of ram installed with plenty free…) but also happens sometimes when trying to switch between tabs. I’ll click the tab title and nothing will happen for what seems like several seconds, then the tab will switch…

Generally though I’m having a wonderful time with this machine and I’m hopeful it’ll catch on as planned!

Got everything working on Arch except Bluetooth here. I just upgraded to 5.13.9 so its a bit odd since others are saying it worked as of 5.13.8. Going to try and do a downgrade to 5.12 and upgrade and see how it goes, if a reboot does not clear it up first.

On another note, I tested some games for fun in steam and the 1185 is a powerhouse for an integrated chip! Everything else is super snappy so far and I got fingerprints working fine with fprintd too.

Edit:
I got bluetooth working well under 5.12.5 now. One Question I have though, has anyone had success setting up fancontrol? I tried running pwmconfig but it couldn’t find anything. Was running a test and the cpu hit 100C and I realized it was not pushing the fan very hard.

@SparkX120 just a note that we would expect temperatures to hit 100C for a few seconds at the start of heavy load when the CPU is operating at PL2 limits (>30W). The fan should then start to ramp up as the load continues and then the CPU will drop to the PL1 limit of 28W and temperatures should drop.

On my side im using Manjaro with my Framework Laptop, so far so good except on one thing. At the beginning i installed Manjaro with Gnome 40, everything worked, yet i wanted to try Xfce to check how it has progressed since the last time i used it (and to check if it’ll have improved the autonomy).

Since the test has been inconclusive about the autonomy (i had worse result than Gnome 40, and also the fingerprint isn’t usable yet), i reinstalled Manjaro w/ Gnome 40. Yet i ran into an issue and i don’t find an answer which would explain why it happened.

And the thing is that it work without problem with another finger (and i tried multiple times, it doesn’t work only with the right finger that i enrolled on the previous install), it’s like the sensor kept my right finger in its memory. Do you know how can i fixed that ?

it’s like the sensor kept my right finger in its memory.

It does actually, the sensor stores the fingerprint data and just gives a pass/fail to the OS. Try this:

Fedora 34 on the Framework Laptop Linux

@Adrian_Sanabria @waocats I had similar errors after installing Windows to debug the trackpad issue. I was able to work around it by enabling the fingerprint login in Gnome (although I couldn’t enroll a fingerprint), then disabling fingerprint login and then reenabling it again. My guess is that since the fingerprint reader is a match on device chip there might have been some logic that needed to get reset after reinstalling an operating system. You might give that a try and see if that resolves…

Maybe try unplugging the battery from the mainboard once you disable it in bios again. let it sit for 15 mins or more before trying again.

The fingerprint reader is “match on chip”, meaning it actually is encrypted and stored in flash in the fingerprint module. As @jeshikat notes, there is some method to reset the state. I’m not entirely sure how it is supposed to work, but there is a note here about fprintd-delete fprint - ArchWiki

If anyone has /sys/kernel/security/tpm0/binary_bios_measurements on their Framework it would be great with a copy. Either upload it publicy, privmessage me or email me on foxboron@archlinux.org.

Seems like it’s missing on the one I have which is the case on some fault drivers but I’m not sure why.

It doesn’t contain any sensitive information and the goal is to figure out if self-enrolling secure boot keys would brick the laptop because of Option ROM during boot.

@Foxboron I also do not have the file. I tried mucking with the TPM settings in the firmware interface and still nothing. I’m going to keep poking at it.

Of note, I have TPM-based disk decryption working using systemd-cryptenroll. So the TPM is there and talking, just apparently not to the OS?

@Foxboron I also do not have the file. I tried mucking with the TPM settings in the firmware interface and still nothing. I’m going to keep poking at it.

Of note, I have TPM-based disk decryption working using systemd-cryptenroll. So the TPM is there and talking, just apparently not to the OS?

So the TPM2 eventlog is not fetched from the /dev/tpm0 device, it’s fetched from the ACPI table, the EFI configuration table or another subsystem I’m not familiar with. So the fact that tpm2_* tools work and the tpm eventlog isn’t exposed in sysfs is orthogonal i believe.

Kernel bug or a ACPI issue on the system?

Maybe try unplugging the battery from the mainboard once you disable it in bios again. let it sit for 15 mins or more before trying again.

I’m not entirely sure how it is supposed to work, but there is a note here about fprintd-delete fprint - ArchWiki

It works only before a reinstallation (because it checks the /var/lib/fprintd folder).

There is actually a way to do this on Windows, but I’m not sure what the equivalent would be for Goodix’s Linux driver:

@Foxboron I have secure boot working with systemd-boot, sbupdate-generated unified .efi image. Thanks to systemd-cryptenroll, my disk is only decrypted if the secure boot process executes successfully (LUKS2 key stashed in TPM).