I seem to be getting the same 4% per day in hibernation on Manjaro linux. No installed ports except USB-C. (Granted, I’ve taken maybe 2 data points)

Hi without going over the whole thread again, which OS are you using.

OS doesn’t play a part when the laptop is off, so that’s irrelevant.

Meanwhile I went on the BIOS and there’s an option to “disconnect” the battery when the laptop is off… That seems to work. Now when I charge the laptop completely, turn it off and come back a day after, the battery level remains the same.

. Now when I charge the laptop completely, turn it off and come back a day after, the battery level remains the same.

But you have to plug in to power on again: Is that right?

But you have to plug in to power on again: Is that right?

According to the instructions I should… But un reality I don’t.
Even with the laptop unplugged, it powers up without hesitation.

Thanks. I’ll give that a try.

Has any permanent solution been found? I’ve had my laptop die overnight a few times this past week, and today it was at 1% before I could plug it in.

Didn’t have this issue for at least 5 weeks after getting the laptop, so this has just started with no changes to my system.

I have a 256GB memory installed
The laptop was set at 69% and then unplugged and turned off around 11pm last night.

So I have no idea why my reading have gone up twice in non-equivalent steps.

I’ve an idea that the monitoring is very questionbale.

How long did it take to get the battery up to a decent charge? It may indcate the battery wasn’t as low as the recording showed ??

I plugged in and started using around 7:30 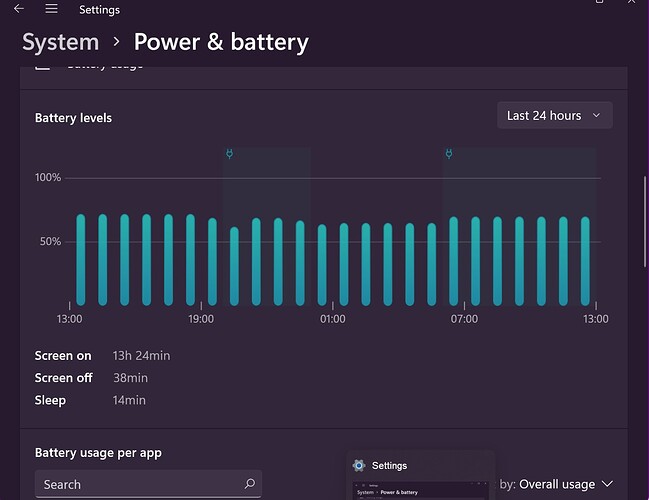 How long did it take to get the battery up to a decent charge? It may indcate the battery wasn’t as low as the recording showed ??

3h of charging, and it’s still not at 85% (the charge cut-off I set in the BIOS), so the battery was as low as it stated.

What charger do you have.

Either will charge the battery in under two hours.

Is the laptop getting hot? As if power is being used and the battery is not charging quickly that means that the laptop and the charger are going full wack.

Is the laptop completly off when charging? I.e no chance is was going to sleep etc.

Original charger and cable, but it seems that the windows battery status “froze” as it did reach its expected charge in just over an hour.

No excessive heat during charge, and I do use my laptop while it was charging.

I don’t think there’s anything wrong with the charger/battery, but something causes it to drain overnight from time to time, as per the rest of the thread.

Given that, I wonder if it really did discharge.

Can you check the voltage?

Given that, I wonder if it really did discharge.

The power light was flashing red when I opened the lid, and it showed 1% along with the battery chart in windows showing the drop, so I assume I did.

This happened only twice, and it’s been generally pretty consistent with nighttime drain, which isn’t usually a problem.

I will note that while I don’t have any connected peripherals attached overnight, I do still keep 2 x USB-C and 2xUSB modules attached to my laptop.

I do still keep 2 x USB-C and 2xUSB modules attached to my laptop.

I have seen reports that the USB A cards use a bit, but it can’t be that much.

I have two USB C One 256 Memory and One microSD slot.

When shut down I loose maybe 1% a night

Has any permanent solution been found?

Kieran has said that a permanent solution is going to be in the next firmware update, but as far as we know, said update has been delayed by Insyde while we wait for upstream fixes to some big issues. Unclear what the timeline will be on that.

We have a fix for the high battery drain when powered down that will be released in bios 3.08.

I believe that a fairly easy workaround for this problem could be to, after shutdown, power the laptop on again and when the display turns on, press the power button again to turn it off. Doing this, I’ve observed zero battery drain after a day or so (though I have not actually confirmed that I do have the battery drain when doing just a regular shutdown, so I did not do a full comparison).

I suspect that doing this makes the BIOS or EC trigger a poweroff, which maybe powers things down more completely than the OS does (as instructed by the ACPI tables from the BIOS).

If you’re having the drain problem, maybe try this approach and let us know if it works for you?

I believe that a fairly easy workaround for this problem could be to, after shutdown, power the laptop on again and when the display turns on, press the power button again to turn it off.

Will try this, I’ll get back in about 3 days to see if this works.

Regarding my previous post where I noted a 1% battery loss over night.

Either will charge the battery in under two hours.

The first 30 minutes, as expected, the charger got very warm but not hot.

It seems have the laptop on forces a higher charge rate to the battery. I would have thought the battery would charge at the same rate and power to run would be separate. However if the power is taken directly from the battery then bu powering on the battery voltage drops and the input voltage may increase, hence quicker charging.

Will try this, I’ll get back in about 3 days to see if this works.

Nope, did not work for me at least

Not sure what the switching off was really going to acheive.

So what is your ongoing problem? Is it the main battery draining quicker than you think is reasonbale.

As the thread is titled, How quickly is your main battery draining?

The first post I see of yours was three above, 5 days ago. You don’t say what OS you are using, what bios revision, or many parameters you have the laptop set up to. ??

Do you have figures?

Just searched and found this of yours

Heres the list of factors that made a difference in getting to ~2.2W idle draw, in roughly the order of effectiveness from high to low… Brightness manually set to 1 (this is the single biggest factor I have found) Airplane mode (ax210 is pretty power hungry even when doing nothing) TLP bat mode sets all the rest of the important power saving and tunables automatically PSR turned on allowing for C10 idle state (no issues with this observed in kernel 5.15.x for me). Arch Linux + Plasma + Waylan…