Saw some interest here in an ethernet card - I have a few different tricks that might allow for one to juuuuuuuuuuust squidge into the same size as other expansion cards. But I don’t have a framework yet (part because of the ethernet thing, but mostly just because I’m not in desperate need of a laptop), so I was wondering if anyone could measure the space under the rear expansion cards to the table. double height cards are no fun imo

I measure 3.45mm with a micrometer.

awesome, thanks. that should mean it’s just barely doable
just to check, what exactly did you measure there?

another sanity check someone should probably do- see if an ethernet cable goes into an expansion slot when the laptop is on a surface. tab down ideally cos that’d be this guy works

just to check, what exactly did you measure there? 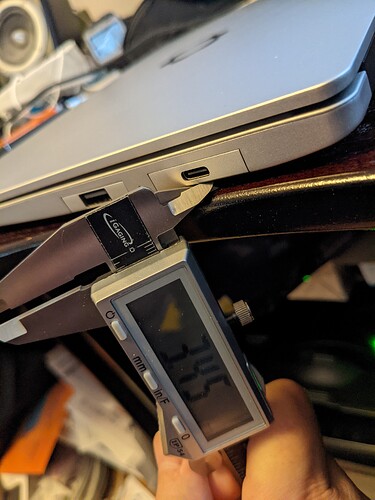 another sanity check someone should probably do- see if an ethernet cable goes into an expansion slot when the laptop is on a surface. tab down ideally cos that’d be this guy works 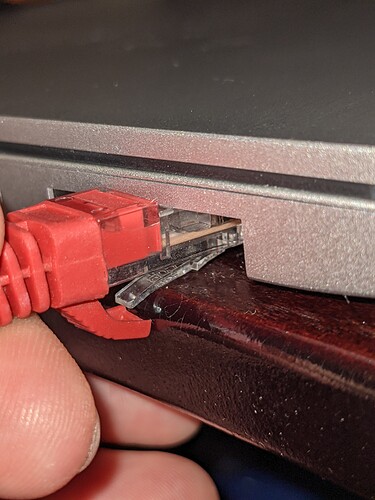 It does, just barely. The tab does extend below the underside of the laptop though (hits the edge of the desk quite solidly there). As for the anti-snag tab, fuggetaboutit. 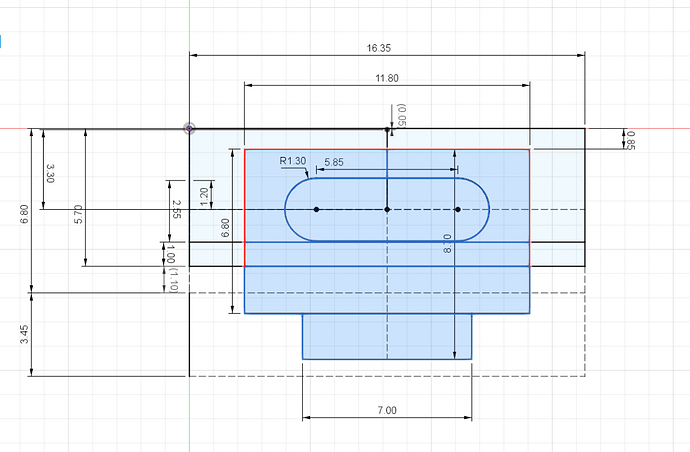 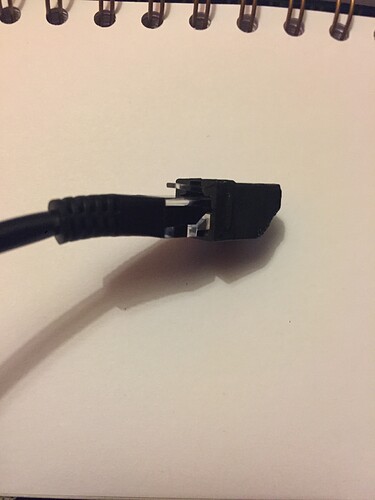 image2448×3264 885 KB
just downloaded a model online for a quick check, so it’s a fair bit taller than the plan. next up- model the jack i wanna use, and then the bottom half as a separate piece
i didn’t mention it yet, but my endgame here is to have a folding jack like on some other laptops. so it fits fully in the expansion slot when stowed, as well as under the laptop when deployed
3 Likes
Xiaoling_He November 6, 2021, 12:58pm #7

Ever considered the Fujitsu Ethernet jack? It folds into the laptop nicely with anti-tripping safety mechanism. 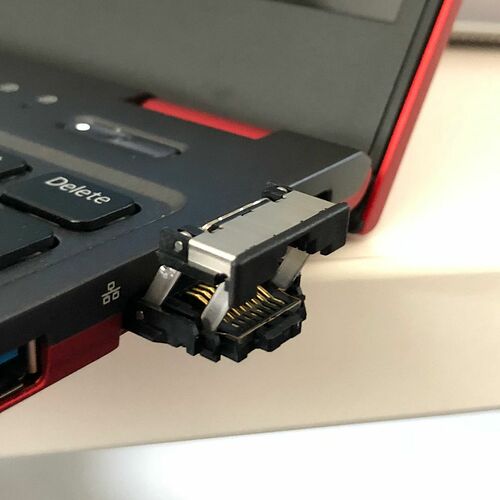 That ethernet jack is certainly a big inspiration for this project

that said, this requires both halves of the ethernet jack to move, which I think would be a pain in the butt, and I don’t really know how you’d do that reliably, especially with off the shelf parts. not seen any teardowns or available replacement parts to have a look at either.
The four bar linkage is something I might use though. 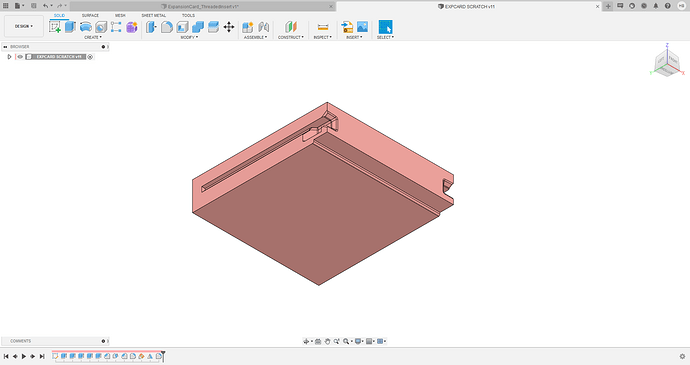 ) if there are any fusion users here, I’d like to slightly humblebrag about how nice the timeline looks

this means I wont be modifying a step file to make my own enclosure, which would probably make me wanna rip my hair out. If anyone’s interested in the file- here it is if anyone w/ a 3d printer and a framework would like to test it, would be mucho appreciated <3

Designed and printed this guy today- based off of the ethernet port I printed before and the expansion card I modelled yesterday. 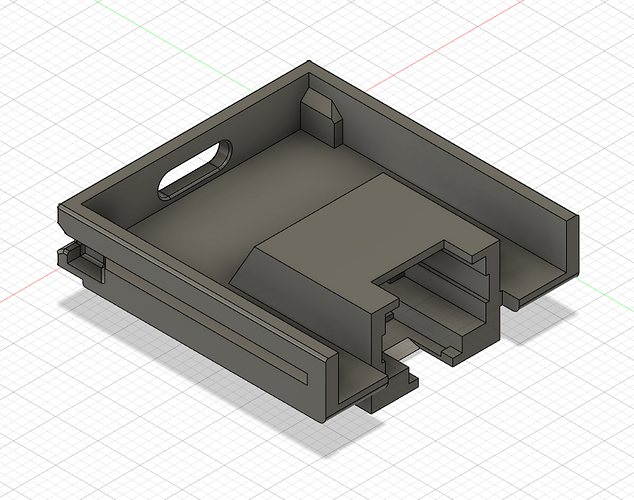 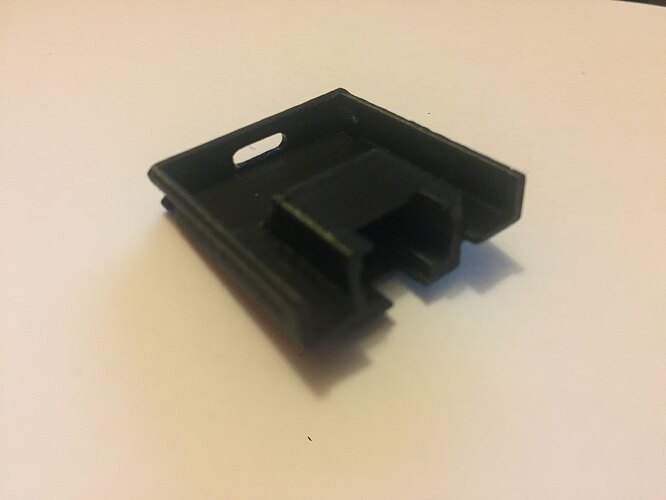 there is certainly room that could be shaved off still, plus the final hinged design will sort of cheat in this regard I think- since it will be spring loaded, it’ll push itself back in towards the laptop, allowing it to fit in a shorter profile than a regular old ethernet jack. 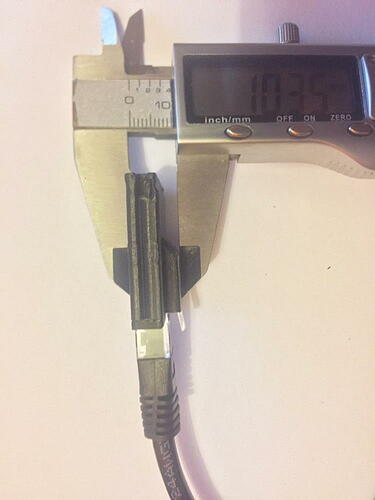 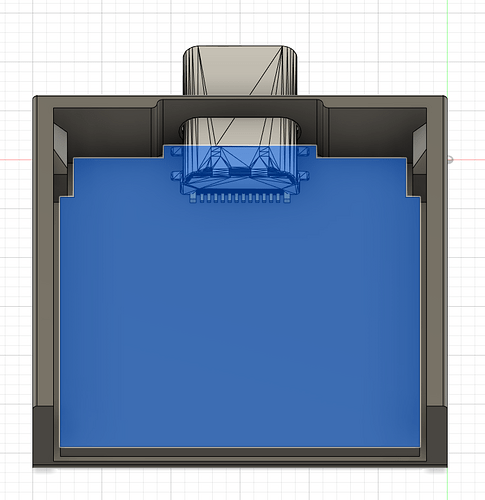 Fusion360_WWuGKhJTCI766×789 84.3 KB
I feel like this connector would be nicer than a midmount one for a breakout / prototyping PCB, since you get more Z height on the top side. wonder if anyone would be interested in that?
7 Likes
ExplodingWaffle November 18, 2021, 10:31pm #11 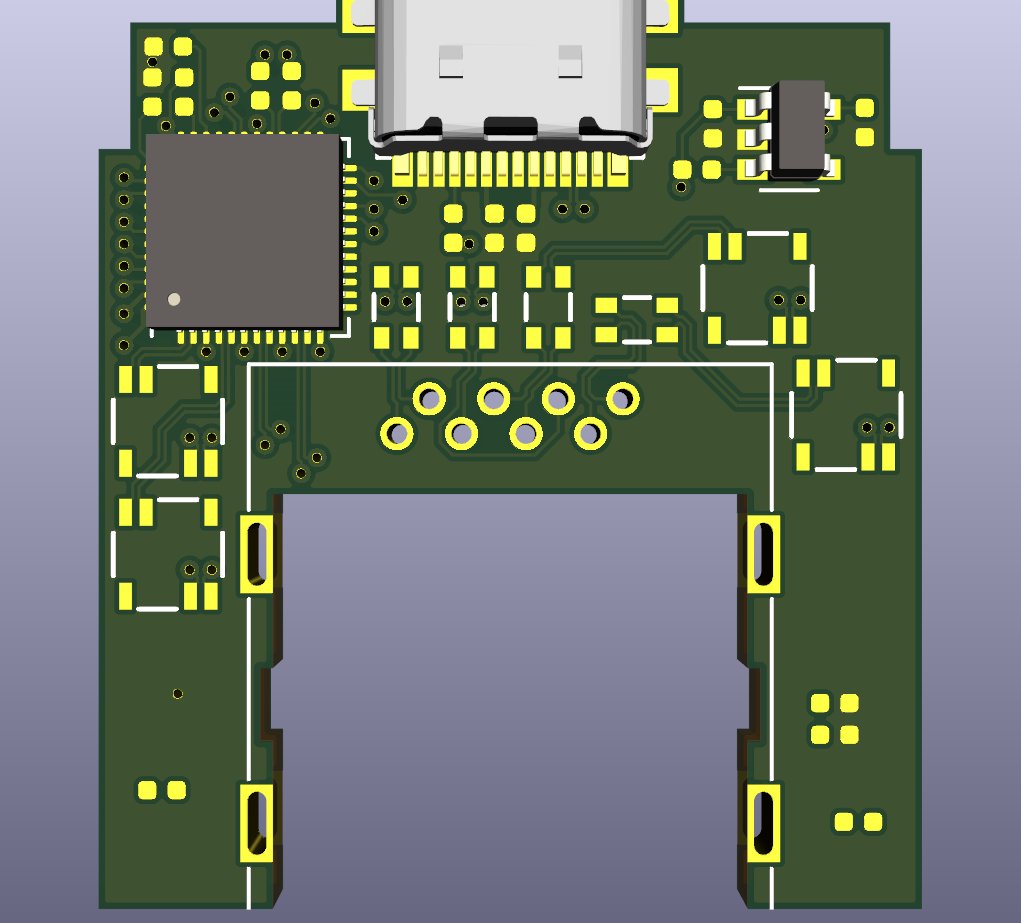 lil progress update- started the PCB. honestly wasnt sure if this was possible when I started. but it is. barely

This is great. One thing to check is on the magnetics. Were you able to find a way to fit the magnetics required for one of the compact jacks that doesn’t have integrated magnetics?

Were you able to find a way to fit the magnetics required for one of the compact jacks that doesn’t have integrated magnetics?

those squares are transformers, and the rectangles are the common mode chokes.

Want to try something a a bit crazier? 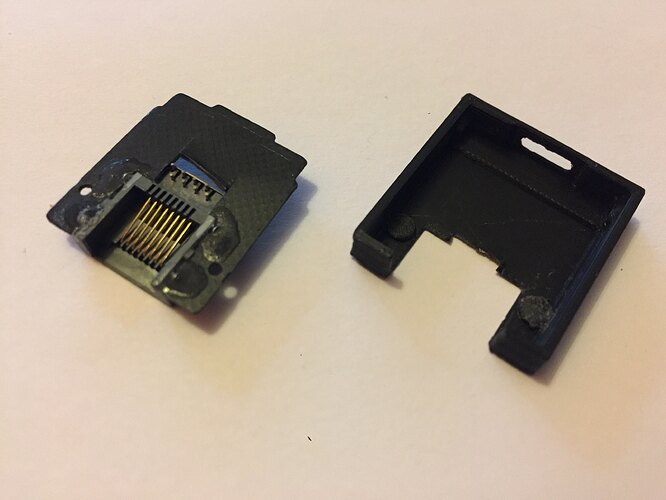 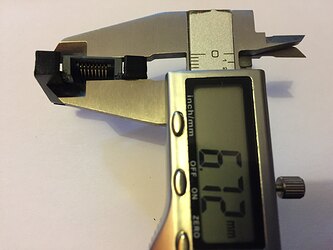 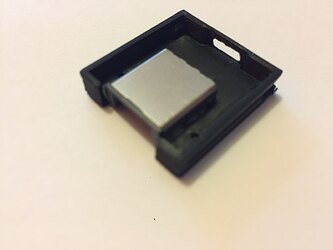 Want to try something a a bit crazier?

those are some cool looking connectors, especially the built in LED ones. your google-fu is clearly better than mine since I’ve not seen those before. That said, I don’t think any of those fit quuuite as well this one. certainly worth thinking about if it turns out being a bust though.

I know this is a bit late in the game, and I have seen this posted in other ethernet expansion card topics, but have you looked into IX Industrial connectors? It’s a new connector standard that is being marketed as an RJ45 alternative for ethernet connections. The connectors are similar in size/slightly smaller than USB type-A connectors. They also already make pre-made ethernet cables with an IX connector on one end and a RJ45 connector on the other end. I don’t think this would be a full replacement for the RJ45 module you are currently designing as those cables are everywhere, but if you want an ethernet module that is standard size, this may be the way to go for version 2.
Below is a link to a Digi-Key search for the IX Industrial connectors - I’m not affiliated with them in any way, but my company uses Digi-Key to purchase a lot of our components and electronic parts, so I trust them and know they are a good source for connectors and other components.
https://www.digikey.com/en/products/filter/pluggable-connectors/443?s=N4IgjCBcoBwAwWiAxlALgJwK4FMA0IA9lANogDMAnAEyUBscIAugQA5pQgDKmAlgHYBzEAF8RBaqRABJAB4ACAQBMsAZz4BDADbMRQA

Whenever I see something being marketed as a new standard for an old one, I can only think of it as something like xkcd: Standards, haha.

those are some cool looking connectors, especially the built in LED ones. your google-fu is clearly better than mine since I’ve not seen those before. That said, I don’t think any of those fit quuuite as well this one. certainly worth thinking about if it turns out being a bust though.

They start at 5/5.2 mm in height and go up, and they can be mid-mounted. Might be possible?
What connector is that? Did you modify it? I didn’t really find another half-connectors besides the Singatron ones. Hirose had a latching one, but it’s been recently discontinued. 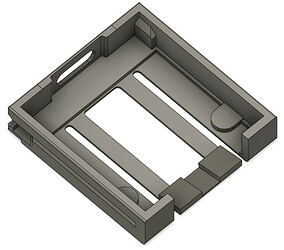 Fusion360_pQJYWOjjH51153×243 24.2 KB
It works… kinda. holds in a cable, but will come out if you pull it at some angles. Just a proof of concept though, I think a better design would be doable, and I certainly wouldn’t wanna use a live hinge in the real deal. However… 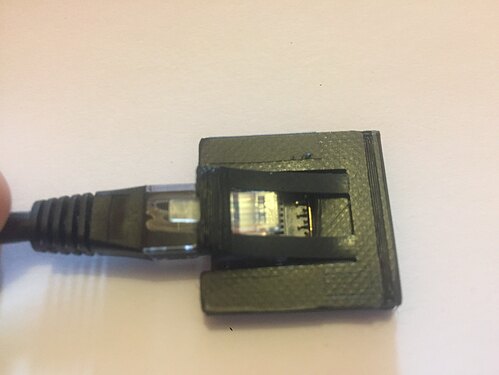 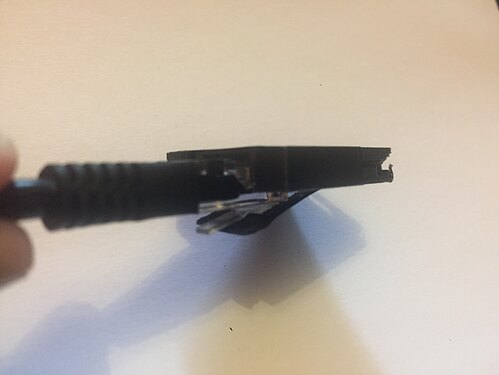 I measured 10.6mm when I was squishing the whole thing down. The issue is that there’s an extra 0.85mm step in the connector for some reason, which I didn’t account for in my initial drawing: 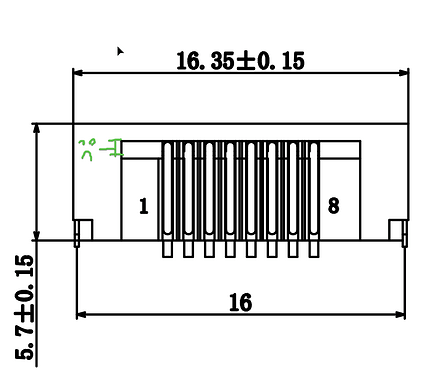 I think that the whole concept- that is, a gigabit ethernet expansion card which stays inside the expansion card while folded, and under the laptop while unfolded- is still possible though- you’d just need a connector that
a) stayed under the height limit of pcb (4.65 mm. maybe a bit higher if you can leave the bounding box of the card and go up into the laptop a bit?) and
b) had a smaller “top portion”- The one I used had a 1.7mm top portion, and was 4.7mm above the pcb- either deep in the depths of the chinese markets, or a custom tooled one, though this one @taeyeon suggested is close (4.8mm above pcb, 1.1mm top portion). I’m pretty sure that the “origami” style connector would go too far into the laptop- the USB connector would get in the way.
Alas- I think I’m gonna throw in the towel. The only people with the resources to pull off something like this would be framework themselves… you guys up for it? ;p (feel free to dm me if you want anything, this would be great to see, real engineering masterpiece)

Some great work here. I’m no electrical or mechanical engineer, but I definitely appreciate the challenges faced.

Curious about the option for something like the old 3Com/Megahertz XJACK connectors. Seems like this could meet all the requirements. Not sure if those are available commercially, or if there are licensing/patent issues though.

In laptop computing, the XJACK is a type of extendable connector or antenna for a type II PC card, designed by the Megahertz subsidiary of 3Com. When not in use, the XJACK retracts into the PC card for storage. The XJACK was originally used in modem and network cards, to attach a standard RJ11 or 8P8C plug directly to the PC card. They do not require a separate dongle, which could be lost or misplaced, and do not need to be removed from the laptop when travelling. An alternative approach is to u...