I’m wondering what people suggest for Linux distros and flavours for people who are both new to Linux that have various accessibility concerns? Not just the name and flavour but the why? What are the strengths and what are the weaknesses (if any)?

What else am I missing? Are there any particular accessibility resources for beginners that you have found in the Linux community for this topic?

I am coming from the Apple ecosystem but am asking not just for myself but for anyone facing accessibility challenges.

Thanks in advance for your input!

Not sure if you have used Linux before, but I’m guessing you are new to it?

One of the benefits when it comes to Linux is that it is heavily customizable. Really, the distro you choose is just a starting point and you can add to it as and when you need. I haven’t heard of a Linux distro specifically tailored to accessablity, but maybe someone else has (I’ve only been a Linux user myself for around 6 months)

Most desktop environments (the distro’s UI) allow you to change the icons and system font, as well as adding new fonts.

Again, most desktop enviroments have these I think?

Some distro’s already have ARM support and most will probably be ported as more ARM devices become available!

As for your other points, I suggest that you try out different distros as a live usb and see what you find best. I started on Linux Mint, which I found a great way to get into Linux coming from Windows. However, coming from the Apple system, you may prefere something different? Quite a few distros offer different flavors, which basically means they have a different UI. An example is Manjaro. As for staying with a GUI, your best bet is probably a distro with KDE or Cinnamon (Linux Mint’s desktop environment) as these have a feature-rich settings app. Also, I have heard that Elementary OS can be good for MacOS users, but I’ve never used it myself so I can’t comment on the update/GUI process.
As for updates, both Manjaro and Linux Mint have a built in updates app. Manjaro is based on Arch, whereas Linux Mint is based on Ubuntu (which itself is based on Debian). What this means is that a Manjaro system will get new features and kernal updates faster, but Linux Mint is more stable. However in practice, I haven’t had any problems with Arch or Manjaro.
As for resources, I don’t know of any specifcally tailored for beginners, but the Arch Linux Wiki is a very good resource, regardless of which distro you end up choosing.

Overall, what I will say is whichever distro you choose to install, you are not stuck with it. You can install and switch desktop enviroments at any time, and there is a way to customise practially everything.
One thing to note is that, if you install Linux, you are going to have to deal with the command line at some point, if you really want to take advantage of Linux. However, it isn’t as scary as it first seems, and in the end you might find you prefer it to the GUI for certain things!
If you have any more questions, or feel I have missed something, please don’t hesitate to ask! I have really enjoyed using Linux for the last six months, and next time I replace my laptop (hopefully with a Framework!) I probably won’t be installing Windows 10 (I currently dual boot). The freedom on Linux to do what you want coming from Windows is such a difference (probably the same coming from Apple too)!

Thank you @Matt1 I very much appreciate the input!

I will be new to Linux when I get a computer. (Not currently able to test it out until I do). I am looking forward to it… and also trying to avoid going down a rabbit hole. My only exposure to it was during my one and only year in engineering - turns out degrees are hard to afford on disability payments.

Accessibility is an interesting thing - really a whole bunch of different things. Apple does it pretty well but still could use improvement.

One of the biggest issues I find is that customization is double-edged. On the one hand, it allows things to be tailored very minutely to a specific users needs but it requires that the user is able to understand the need for, discover the method to, and effect the customization.

An example of this would be the Debian Wiki on accessibility (using debian just as an example). Many potential users with accessibility needs will never even get this far…

One thing that I’ve noticed during the pandemic is that a lot of medical appointments have gone online but some people in my disablility community are struggling to access these appointments because of either not having a computer, not having the ability ot operate a computer because of an accessibility barrier, or their older machines not handling telehealth programs well… a growing digital divide.

I’m personally lucky to have an iPad to access these services but am looking forward to getting a laptop again so I can deep dive into Linux to see if it has the potential to bridge this digital divide.

I wonder if anyone knows of any there any specific developer groups working on accessibility in the Linux community?

Hi @Michael_Richards, Thanks for sharing.

Since accessibility is often handled by the window manager, I would suggest you check out either the Gnome or KDE accessibility pages, which are two popular windows managers used by many distributions. They describe many of the utilities and settings you can adjust to enable various accessibility features.
https://help.gnome.org/users/gnome-help/stable/a11y.html

Thanks @Kieran_Levin I will look into these for sure.

One thing to note is that, if you install Linux, you are going to have to deal with the command line at some point, if you really want to take advantage of Linux. However, it isn’t as scary as it first seems, and in the end you might find you prefer it to the GUI for certain things!

The command line on Linux is pretty much the same as on macOS’ Terminal.app and on OpenBSD/FreeBSD/NetBSD console mode or any terminal program as well - they are all based on traditional Unix’s way of doing things. Learn it once, use it everywhere (except for the “system administration” parts, which vary wildly across that range of platforma). As @Matt1 said, it’s often preferable – once you get the hang of it.

@Ian_Darwin Thanks for that! I don’t have any experience using MacOS, so that’s not something I had picked up on…

Looks like Windows is the odd one out when it comes to the command line!

@Michael_Richards I have screenshotted some of the accessablilty options from different DEs (desktop environments) below: 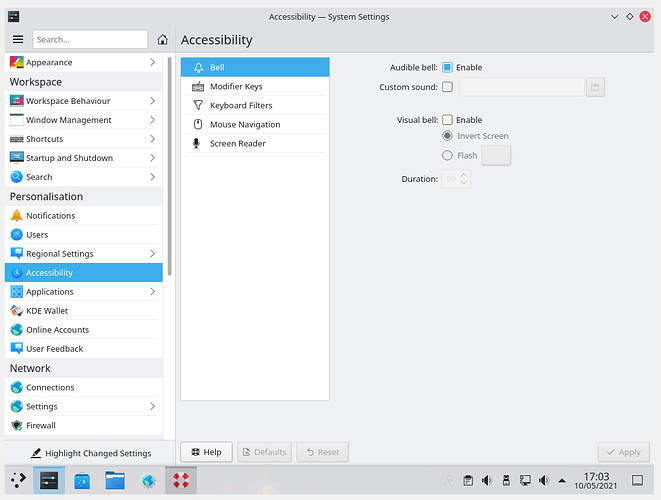 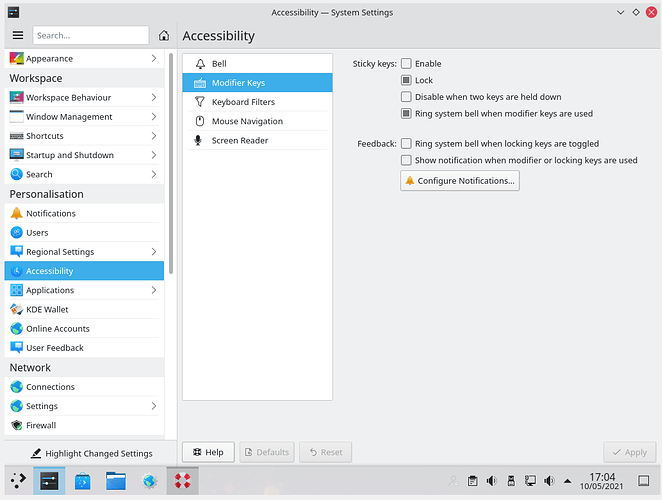 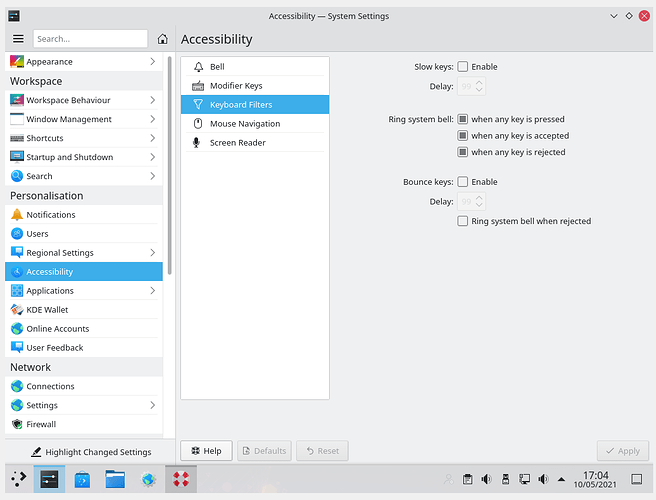 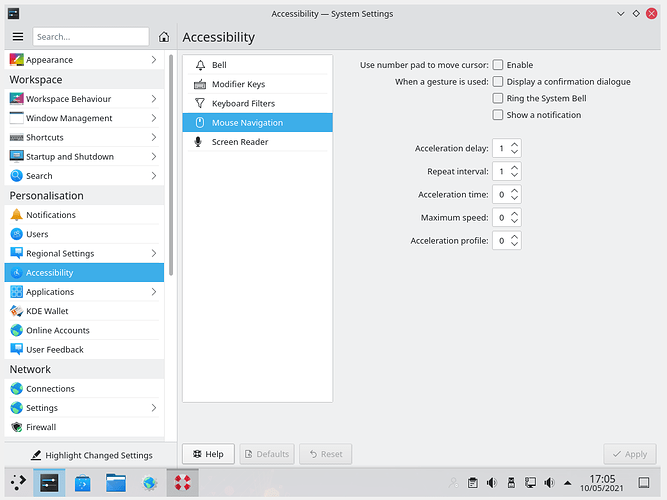 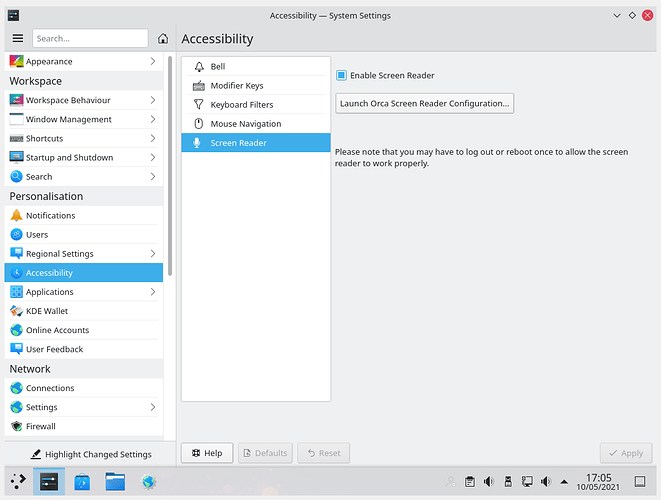 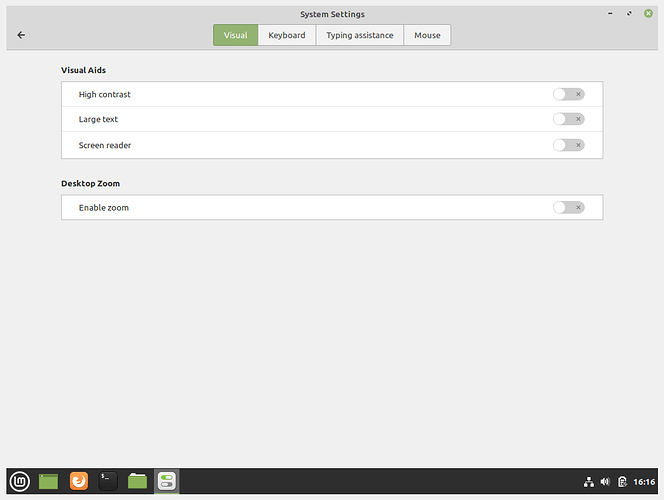 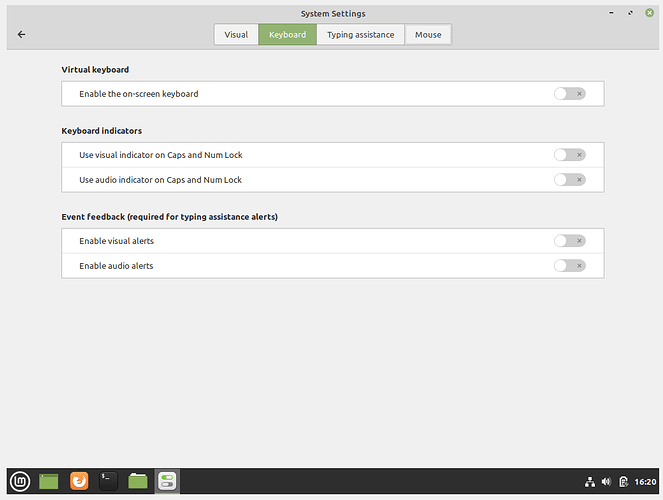 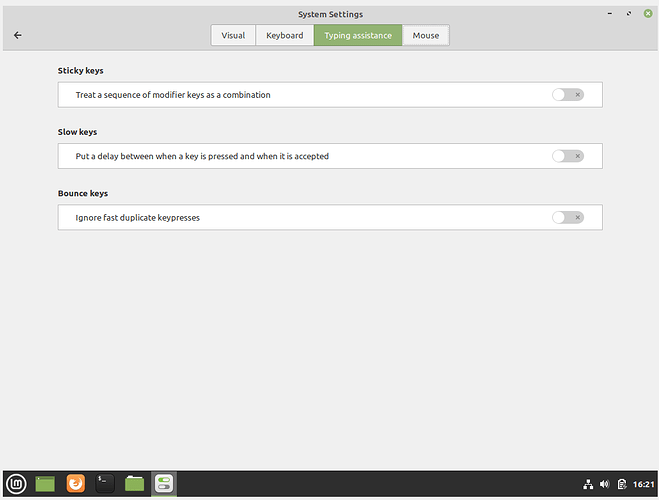 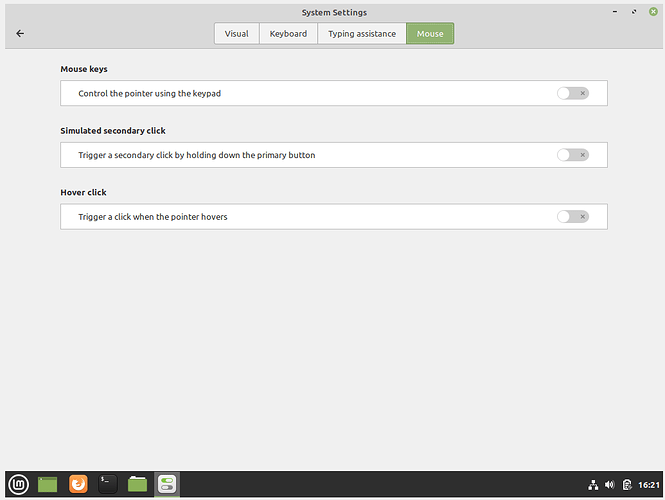 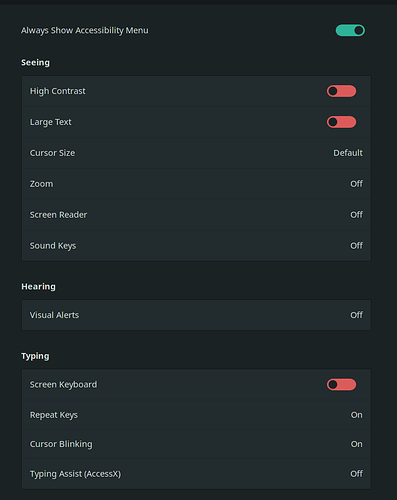 And the accessablilty menu from the system tray: 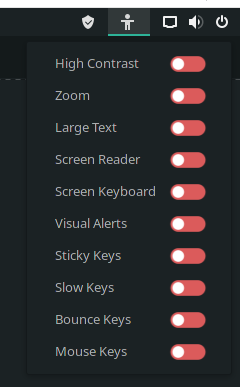 All three are pretty good DEs. As I have said before, I started with Cinnamon, but I now use Gnome. Although Gnome has the least options in the GUI, I chose it for it’s overall look and workflow (KDE and Cinnamon work in a similar way to Windows, Gnome is very different). Also, Gnome has a range of extensions, available from the Gnome extensions page.

Thank you again @Kieran_Levin @Ian_Darwin and @Matt1 for really putting the community into a community form. And @Matt1 those scrfeen shots are perfect!!!

No worries! I had the VMs lying around from when I was choosing what Linux distro to use myself, so it only took ~5mins to boot them and take the screenshots!

You may already realize this, but one clarification I would like to emphasize that was mentioned in passing above, is that in Linux the window manager/desktop environment is separate/configurable/changeable separately from the distribution. This took me a long time to wrap my head around when I first moved to Linux since I was used to it all being the same thing in the Windows world… Saying “Windows 10” implied a certain desktop experience, a certain OS kernel, and certain software support.

Depending on the accessibility needs of your specific community though, you may find a particular window manager and ecosystem works best for you. For example, if using a mouse is difficult, you may actually have a better experience with one of the more “advanced” keyboard-focused tiling window managers like Sway. If you find KDE works best, but want the wide software compatibility offered by Ubuntu, you can use the Kubuntu distribution instead, which is a flavor of Ubuntu that installs KDE out of the box instead of Ubuntu’s usual Gnome. You could “create” Kubuntu from a regular Ubuntu install by manually installing KDE and removing Gnome, since both are available in the Ubuntu repositories, although this would probably require interacting with the terminal quite a bit.

All this was to say that the distribution really determines what package repository you are pulling software from, and most of the major repositories support a variety of different window managers. If you search for “Ubuntu accessibility settings” you will find forum posts talking about settings in Gnome, Ubuntu’s default window manager. As indicated by Kieran_Levin above, you’ll often find more information by actually searching for “Gnome accessibility settings” instead, since then you will get input from users of many distributions using Gnome, and the Gnome team are actually the ones implementing and designing these features.

Welcome to the world of Linux! It can be a lot to learn at first when switching, but comes with great power and flexibility in the long run!

Thanks @Matthew_Johnson! I probably should have clarified that in my answer…
One thing I would say is definitly avoid tiling window managagers initally, as they don’t have the same features of a full desktop environment.

Also, I would like to echo your point about switching. Although it can be hard, it can also be a lot of fun, and it’s free, whilst still being better than Windows (at least in my opinion

Once I get into it it, would be great to see if there is interest in the Linux community in creating an accessibility features chart for all the different dirtos and flavours - a unified landing page for those in need of or interested in accessibility features to easliy compare (and hopefully encourage and help all distros/flavours to use best practices).

Thanks everyone for all your advice and insights on this topic!