I don’t have much experience with hardware. Is the final verdict here that it will be possible to have an CUDA-enabled GPU, but with somewhat reduced performance?

It will require an external GPU dock, but it is possible. Thunderbolt 3 has equivalent bandwidth to PCIe 3.0 x4, but on average that will give 90%+ of the performance of PCIe 3.0 x16 like found on desktops: https://www.techpowerup.com/review/nvidia-geforce-rtx-2080-ti-pci-express-scaling/6.html

Future GPU generations may have more of a performance hit from the limited bandwidth, but it will depend on your workload.

So question on the USB-C on the board are they 2 lane or 4 lane?

They use the Thunderbolt 4 standard

Hi there.
Have a look in ASUS ROG devices. This one is under 2 kg with RTX3060. So it should be possible without graddle or other unhandy stuff.
Regards, harald

Yes that would be a very good option. However I think the chassis and the cooling may be somewhat limited because of how small the body is. I mean there are laptops out there with a little bit thicker body, but it is still not enough to cool both cpu and gpu for gaming. I would rather have a different but thicker body design and cooling design that is specifically for higher TDP if you wanted dgpu.

I’m going to pop in here to say a few things.

B) Definitely cpu bottle necked when playing games at times, but otherwise ran quite well. I tried out No Mans Sky running at the native screen resolution of the laptop at fairly high graphics settings and except for a few frame drops to around the 30s (usually when loading in assets and whatnot), I got 60 fps the rest of the time. I’d say a pretty decent gaming experience

C) slightly separate but, (as I was typing this post up on the laptop it happened), the laptop will randomly freeze up and the only way to force it to shut down is the good ol’ holding the power button until it shuts off. It’s so far only happened when on my desktop and not running any games or anything. I don’t know if it’s because it’s connected to the external GPU yet but I’ll get back to your guys on that

@FaultedBeing Let us know what you find on the freezing issue. We haven’t seen that occur before, but we also haven’t done extensive use of eGPUs and haven’t tested the Razer Core X specifically. One recommendation would be to make sure you have the latest Nvidia drivers installed.

@nrp I’ll make sure to keep you guys updated. I had the same thought and already updated the Nvidia drivers to the most recent versions, although the issue happened again with those drivers. I’ll check again later tonight if I can replicate the freeze again

All I had open at the time (and I had just hooked everything up) was task manager and another cpu temp monitoring software. Nothing heavy. I had plugged into the topmost left port with the thunderbolt cable at the time. I also had my headphones plugged into the laptop. 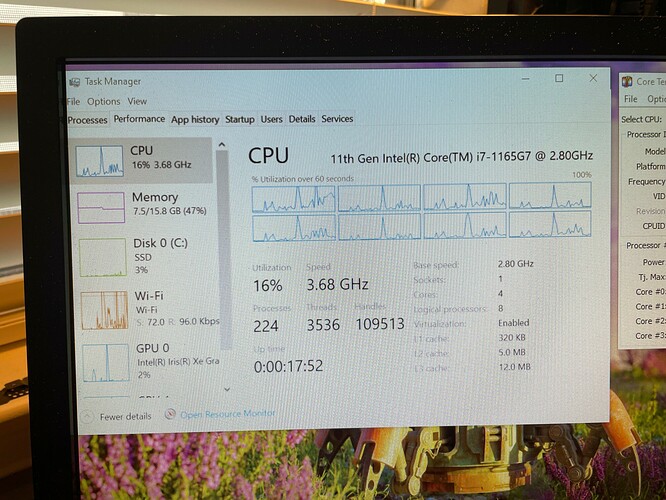 I then switched the side of the laptop that I plugged the egpu into and it’s working smoothly on the other side (so far). Scratch that, it just crashed again ( Literally as I was writing this

) All screens frozen (I had two displays hooked up to the graphics card) still displaying everything but audio just cut off and I can’t move anything or type anything. The fans in the laptop have gone on full (or at least it sounds like it.)

I’d also like to add that when I have the egpu plugged In, and I’m listening to audio through the built in port, there’s a strange crackling. I tried different aux cords, then tried the same cords in a different computer and the issue only happened when I was plugged into the audio jack with the egpu.

If you need more info let me know!

Edit: I’ll also add that I had an Ethernet cord hooked up to the egpu box but I’m not sure if that’s relevant or not

Thanks for the detailed report. Could you also share which Thunderbolt cable you’re using with the eGPU?

It’s the cable that came with the Core X, about a 2.5 ft thunderbolt cable. I could switch it out for a different cord and see if it happens again.

The freeze happened again. This time I had a roughly 6 foot 4” cable (while it looked to be the same type of cord that I was using before, simply longer, Its the cord my brother has been using on his egpu set up for a year now so it should be good).

Instead of unplugging the GPU, this time I turned the GPU off first, and the laptop gave me a blue screen instead. 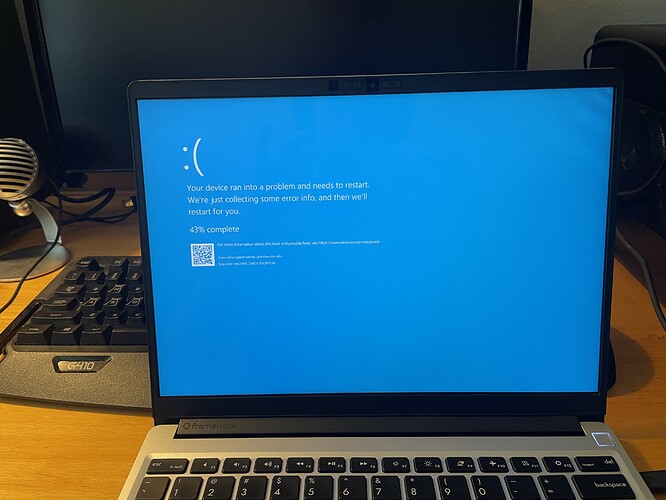 I currently have the blue screen, it says it’s done and will restart (but it isn’t restarting)

Edit: I may force shut it off and hope for the best

Ok so update. Whenever I have Rocket League running it doesn’t crash, soooooo, if I leave rocket league running, and just put the window mostly off the bottom of the screen, I don’t have any issues. I think this applies to any program that requires some graphics power, but, I have a hacky solution and am happy

Very interesting… One other thing that would be interesting to test if it fits is plugging one of the cables directly into the laptop, rather than through the USB-C Expansion Card. That would help to determine if this is a signal issue or a software compatibility issue.

laptop with discrete cards usually needs a good cooling system. So, the fan can’t get too loud and get toasty. So, many manufacturers solve this by soldered the memory/storage parts to save spaces and I hope framework with modular laptop philosophy can solve the issue without soldered important parts

Just tried it, same issue. I plugged directly into the recessed laptop port, with out the expansion card, and I’m afraid it crashed as well.

Edit: I will be away from the egpu for a couple weeks starting Monday so I will probably be of less help for a bit

Thanks for all the attempts! The bad news is that it is still crashing, but the good news is that it seems like it may be a solvable driver or firmware issue rather than something in the hardware setup. We’ll try to replicate it on our side.

I also want to ask about the possibility of a discrete card. I don’t want to have to carry external gpu so are there any plans for a thicker version with GPU?