Will the Marketplace open up to UK, France and Germany soon?

I also made the error to order only a few expansion cards, now I need more but the shipping and handling fees on top are a bit prohibitive… The expansion cards themselves costs pennies, but the on-top fees from myUS and similar are killing it for me

I think you can contact support to modify your order if it hasn’t shipped yet.

As for the original thread question. Unfortunately, I don’t have much to share on this, but, once we have more information to provide, we will be sure to let everyone know!

@BeeAPeach could we get an estimated window?

My framework is already humming on my desk near Zurich, so no order modification feasible. But I went ahead and ordered few more modules

could we get an estimated window?

Unfortunately not, I do apologize. Once we have any information ready to go public, we will be sure to let everyone know!

Thanks for catching that. We will update it. The blank and clear keyboards should be available in Germany not long after we start shipments on laptops there.

my guess is that entails the marketplace and UK/France as well.

Hello Guys!
Can you tell me when the MarketPlace will open for the EU-Countries?
Normally it was something like “The blank and clear keyboards should be available in Germany not long after we start shipments on laptops there.”, but you started shipments in February.

Will the Marketplace open up to UK, France and Germany soon? General Topics

Unfortunately not, I do apologize. Once we have any information ready to go public, we will be sure to let everyone know!

I so buy into the framework model and I’m so keen to buy, but I’m struggling to make that final commitment in the absence of the EU marketplaces. A bit like buying a car with no access to spares. Really hoping framework has some news on this soon.

Getting parts doesn’t require the marketplace availability. Especially in the case of warranty repairs etc.

So how do I purchase additional expansion cards? Change the bezel or the keyboard language? Or upgrade the motherboard? Are these components available from any laptop manufacturer?

In case of warranty the materials are available from FrameWork most probably. Instructions how to change the parts are available at least in english on the website.

If you want to change parts of the laptop outside of warranty or to purchase further expansion cards it seems you will have to wait for the marketplace to be opened in europe. DIY expansion cards from independent creators are outside from FrameWorks space of operation at the moment, i can’t remember them announcing an official trading point for this yet. So you will have to buy from the creators on your own.

@Green Nice balanced response. Thank you.
Another concern that I have is that FrameWork feels a little like a Kickstarter project. Lots of good intent but an investment in a device in the region of £1k and £2k carries the risk that it all folds after initial start… just like many Kickstarter campaigns… and the purchaser ends up holding an unsupported device with no hope of the fabled upgrade path. Somehow, the EU marketplace would give me greater confidence they are around for a bit. I wonder if I am worrying too much about this

. What are your thoughts on this?

And while I’m on my soap box

Please don’t read this as someone trying to bring down FW. Quite the contrary. I want one… but in the FW information vacuum, I’m struggling to justify it. This is more of a plea @Framework to share more.

Well, i’ve bought one, and am happy with it, so i’m obviously biased.

I see your point, and tbh nobody will be able to tell what the next 2, 5, 10 years will bring. FrameWork has presented themselves with having solid investors and have prominent back up, two factors that may support longevity.

I still think, even if the support in the future may not withhold, you’ve bought a device that gives you as much freedom in a laptop that you can get today from a non-custom engineered device. You may still be able to purchase a battery with similar specs as the original one to replace a worn out battery. Same applies to the other components. Even if your screen and chassy may be wrecked, as long as the mainboard survives you will have a fully functional computer, and with usb-c as power delivery, one that has a very universal plug, so no problem with weird power bricks.

Regarding secrecy on the road map: Somewhere in the forum was a good post for that. The essence is, if they publish a roadmap with “Then and then will we have an amd laptop/any other certain feature”, a lot of people may wait for them to publish it. If the mass is big enough their cash flow would stop, and the whole corporation could be lost due to cash flow problems. Basically, if too many think of HODL, no one will get anything…

The hardware lag is unlucky, indeed. I think the reason for that is, that FrameWork doesn’t have the ressources yet to be bleeding edge as the big players, combined with the fact that the laptop is only 9 months on the market, and the 12th gen Intel platform came out 5 months ago. 12th gen has a new socket, new chipset, new architecture, so probably nothing trivial to incorporate into an existing design. Not to speak of the thermal massacre of the new CPUs.

You will still get a quality build, fast laptop, with the hope of future promises. It won’t be the best strictly in performance/price ratio, but including the repairability and modularity right now and the enviromental efforts that they are trying to implement today (altough used would still be better in that regard), i think it’s still a smart choice to buy a FrameWork laptop if your needs fit the offer.

Dell is almost 2000 times bigger than Framework. You can bet that Dell’s CEO has a direct line to Intel’s CEO and first access rights to all Intel CPUs. Not even Lenovo or HP have Alder Lake laptops out yet.

Regarding secrecy on the road map: Somewhere in the forum was a good post for that. The essence is, if they publish a roadmap with “Then and then will we have an amd laptop/any other certain feature”, a lot of people may wait for them to publish it. If the mass is big enough their cash flow would stop, and the whole corporation could be lost due to cash flow problems. Basically, if too many think of HODL, no one will get anything… 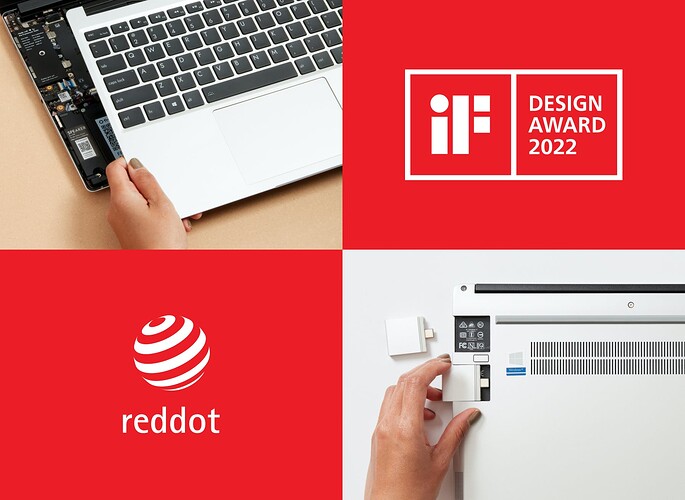 Framework wins the Red Dot Award and the iF Design Award 2022, two of the most prestigious design awards worldwide.

We also have a Marketplace where you can get parts, upgrades, and accessories for the Framework Laptop. This week, we’ve opened the first stage of the Marketplace in Austria, France, Germany, Ireland, Netherlands, and the UK. We’re working on bringing each item into stock, so check back or sign up to get notified.

@Fraoch
Unfortunately that Marketplace link that you posted just flips me back to the main site. I’m UK based. Should I be seeing something different? Am I missing something?

@nrp Apart from the main subject of this thread, I cannot find this blog article on this forum’s Blog category, and I didn’t receive the email too. Maybe as this blog article is the first blog article posted by someone who is not nrp, it seems the operations are missed.