Could we have a wiki page?

The community page is a great way to discuss new ideas and topics, but once the laptop has launched, it would be great to have a user-editable wiki that can be used as quick reference. For example, you could have pages on framework specific hardware (expansion cards etc), general PC hardware (explanation of what each component in the laptop does eg ram) as well as non-framework specific stuff like installing alternative OSes. Also, by making it user-editable people making expansion cards for the marketplace could make a wiki page for their card, meaning users don’t have to find the right website a few months after buying the card to check how to use a certain aspect of it…

Basically, what I am envisioning is something like the Arch Linux wiki, but more geared towards laptop hardware…

Just noticed this in the badges section: 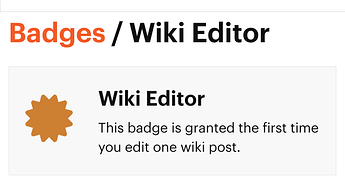 So maybe there is already a wiki in the works! Would be great if someone could confirm this though?

There is in this forum the possibility to make posts as a wiki, that is, anyone can edit them. But there is no separate wiki page

@ts.spivet thanks for that! I still think it would be a good idea for there to be a separate wiki page though…

Of course. You can use MediaWiki for example, that’s the site Wikipedia is based on. But someone has to maintain and feel responseble for the site.

Yeah that could work. It would be nice to have an official one, @Framework any thoughts on this?

We are exploring using Discourse’s (this forum software) built in wiki functionality, though I don’t believe it is currently turned on. I agree it is super useful to have wiki capabilities for community edited lists and guides.

Can a wiki tag be created? I haven’t found a way to find a wiki without searching the name of a thread that I know became a wiki, and having a tag for them would make them easier to find.

Apparently this is the magic search term for wiki posts: Search results for 'in:wiki' - Framework Community

I agree it is super useful to have wiki capabilities for community edited lists and guides.

Also shall we create a new topic for FAQ or a new topic as a top level info of Shipping, Order, Availability on countries with pin and wiki features under Getting Started category? As you know we see lots of similar topics and questions about it. I listed similar threads for usefulness.

I came across this page today. There is a guides site where you can signup to create guides that can be then approved by the admins.

I came across this page today. There is a guides site where you can signup to create guides that can be then approved by the admins.

I think the guide page is for kind of tidy documents officially supported by Framework. The wiki I am suggesting here is more about relaxed documents for community by community. The wiki can adapt for quickly updated topics.

I think 2 layers structure for the documents is useful, and seen on a business model with a community.

After playing with the Wiki feature in Discourse (I’m the owner of the thunderbolt thread), I can say I’ve found it to be rather lacking. The narrow layout of the website does not play well with wide tables like I’d like to have in that thread (such as a column for every testing point so we make sure not to forget any) and the lack of formatting options (e.g. for code) is rather unfortunate.

The Framework Guides are a great addition for things like assembly/disassembly instructions, however for community-curated content, I see a couple of options.

I have moved from MediaWiki to static sites for all of my community-contributed content and have seen decent adoption. While the GitHub flow is new for some, the tools built into the website for one-off changes are pretty strong, and for large contributors, learning to use Git is not difficult especially with the multitude of GUI-based tools. A contribution guide can be included to walk new users through making edits.

Personally I use statiq for its C# Razor support which provides a lot of flexibility in building the site, though Jekyll and Hugo are also popular options.

If we have an interest, I can set up a sample repo using Framework’s site theme as a base and submit it for review.

Is there a time or edit limit to wiki posts? I am trying to edit the BIOS guide and I get a 403 Forbidden error after clicking “save edit”.

@jeshikat Yes. It’s a “feature” of the Discourse forum software that framework is using to run this site. The developers of Discourse seem to be highly concerned about posts being vandalized by their original author, so unless a post is converted to a wiki (which allows anyone to edit the post), edits are locked after a certain time. This cannot be disabled, but it can be extended. I believe the default is 24 hours.

@Foxtrek_64 it is a wiki post is the part I’m confused about: BIOS guide

The edit history says I’ve edited it but the changes aren’t actually saved.