My framework is reaching around 55-60 c during things like writing this comment. I have the BIOS as turbo but I wouldn’t think that such a light load would generate this much heat. Temperature also has been an issue during video conferencing, which I have to do almost everyday; temperatures stay between 80-90 peaking at 100.

Do I maybe have to change the thermal pads/paste?

Any help is appreciated

What OS are you running?

I used to find my laptop very noisy too.

Here is what I did:

@Standard_027 from what i’ve read and briefly experienced on a live system (don’t have my FW yet), you should be fine if you leave all the CPU related stuff to auto-cpufreq. TLPUI helped me set that up in a heartbeat. You might want to conduct some tests to be sure though, especially since you have a heat problem beforehand already. My humble guess for the cause of it is that neither Linux nor the Framework seem to cap CPU frequencies by default, so anything remotely taxing can ramp up the system quickly. auto-cpufreq might really save your day here.

@Jean-Marc_Le_Roux I’m trying out auto-cpufreq right now I’ll give it a few days to see if anything changes, thank you for the suggestion.

Please let us know how that goes! From my understanding, Linux may run hotter and there are guides out there to help if there are overheating issues when it comes to your Linux distro. I see someone mentioned you were having this issue before Linux but can’t see your post. Can you please clarify that further?

@BeeAPeach I’m not sure where it said that, I’ve only used linux on my framework. I’ve installed auto-cpufreq and removed tlp, seems like it is helping keep the temperature slightly lower

I could of sworn I saw someone mention it in this thread. But, if not, please ignore me!

I am glad you are able to get your temps lower. If this continues to be an issue for you, I would recommend submitting a ticket to our support team here: Framework | Support so they can ensure your laptop is performing as intended! 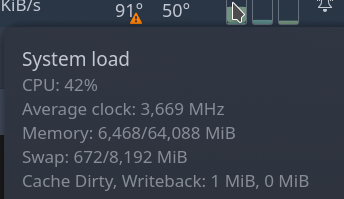 It’s been a week now but it seems like it hasn’t really gotten any better. Should I really contact support?

It’s been a week now but it seems like it hasn’t really gotten any better. Should I really contact support?

I would recommend doing so! They may tell you these temperatures are completely normal given that you are using Linux. But, it’s better safe than sorry and it will help clear out any concerns you may be having!

As far as swap goes I have no clue, when I installed Fedora I’m pretty sure I did automatic partitioning

Yeah I’m running Windows and / or Linux and every time my FW laptop is connected to the power it just blazes out of hell getting extremely hot even though I see it having 10% load or something.

Never experienced this with any of my other laptops to be honest and I don’t believe Linux is to blame here as I use the exact same configuration (power definition) across different machines with no weight for the machine itself.

One of my other laptops actually has a pretty similar configuration (CPU, WiFi, etc) than my FW laptop and… All is good there.

I’m “out of support” as it was told to me by Support due to the fact that I’ve imported the laptop to Switzerland which is in itself a nonsense but OK.

I was seeing 100C temps and thermal throttling just watching YouTube videos. What was noticeable was the very quick rise-time of temperature when any load came on (< 1s). This suggested poor contact between the CPU and cooler.

I removed the cooler and the thermal compound on the two CPU chips was dry and flaky - not a good sign. I cleaned it off with IPA and applied Thermal Grizzly Kryonaut.

Much much better. Been doing my normal work for a day now and HwIfno reports 72C as Core Max maximum.

Leaves me feeling ambivalent: Bad that Framework didn’t focus on the selection and process for the TIC (especially given the low pressure contact) and good that I was easily able to clean it up and apply my go-to TIC from desktop builds…

@Gary_Pace, which batch was your order from? There was an issue in batch 1 (and perhaps 2) where the TIM was deposited incorrectly.

My Batch 3 unit has been having thermal issues since I got it, and I’m not sure if they’re out of the ordinary since what I’ve been hearing here on the forums seems kind of similar, though these seem more severe.

For me, my unit usually starts up with the fan running at a low speed, and if not the fan starts spinning after a few minutes. No matter what, the fan eventually starts spinning, and the laptop still gets very noticeably hot after doing simple tasks like watching YouTube, doing schoolwork in Edge and Google Docs, and streaming games on Stadia. I frequently have to turn it off and give it a break so it doesn’t get uncomfortable to use on my lap.

The battery life on this laptop has been abysmal because of it, and I have to charge it at least twice a day to have it last throughout the day, and that’s usually about 5 hours of usage. The only intensive task I do on this laptop is music production in FL Studio, which even then is only for 30 minutes every day or so. That can drain the battery more than 20% in that 30 minute session, even when I only have 2 or 3 synth plugins open and a few audio samples. I’m by no means a professional music producer so my projects in it are pretty light.

Recently I installed Linux on the laptop, and contrary to what others have said, I got much better battery life on a full Linux install of Manjaro or Fedora and the fan rarely turned on while using it, not even close to the level it would on Windows. I got about 2-3 hours more battery life on Linux than on Windows, and I could get through the day on a single charge on Linux but not on Windows, even when using the high efficiency power plan and power mode.

Should I reach out to support on this? I have reached out multiple times and their suggestions have not worked.

I just switched paste on my Batch 8 laptop. Slapped on some Thermal Grizzly. Had good results with it in the past on GPUs. I usually use MX4/5 on CPUs.

Basically next to no difference in temps. Hard to gauge as the temps jump up and down so often so went with some averages and the difference was ± 2 degrees.