There have been other threads on SSD choice, but they have been somewhat focused on performance and are also somewhat old, and the marketplace seems to be moving fast.

“The drive’s power efficiency is far above the competition; it uses less power than many SATA SSDs while delivering high-end NVMe performance.”

It is also completely unobtainable. It is out of stock on Amazon in the USA and I don’t know if it has ever been sold here in the UK. This is not just “chip shortage”, I seem to be able to have many other SSDs shipped to me tomorrow.

I plan to update this thread with the results of my own research on this but I would be curious to know if anyone is ahead of me and can recommend something available.

I rather took the opinion that an SSD is unlikely to really be that much of a problem power wise, but equally I get barely an hour out of my current non-replaceable battery!

I opted for a Crucial P5 Plus. The 1Tb is currently the cheapest 1Tb PCIE4 NVMe on Amazon UK and available next day. To save some power, you could go for the P5 not-plus - apparently PCIE3 is less hungry than PCIE4. I opted for Crucial because they seem to tune their drives for productivity rather than all gaming, and are vertically integrated so I can trust that the chips themselves will be good.

Very happy with my Hynix P31. Power efficient, doesn’t get hot or need any heat management add-ons, no issues with boot or hibernate on my Framework (batch5 i5 DIY).

It is also completely unobtainable

Also found this listing over on Newegg, a price that is technically under MSRP

Certainly the 2TB model seems to be…let’s say rare but while not as plentiful as other SSDs, they are still available

Edit: Dang, can’t find even out of stock listings-best advice is to get a DRAMless drive if power savings is what you are after, Framework supports HMB so the performance drop shouldn’t be too bad, just get the best one you can I guess

I think on “power efficiency” (and money efficiency) terms SATA SSDs tend to fare very well. They don’t have as much a heat buildup issue (although it mostly depends on controller firmware & algorithm)

However, regarding to ratings I honestly don’t see a difference between SATA and NVMe, with drives for both often rated at the same 1.7A at 3.3V. However I would imagine that a SATA drive will use slightly less power as the slower transfer speed as well as the lack of a PCIe device on the bus allow components to work with more headroom.

Unfortunately, Samsung no longer offers SATA based drives, which is an oddity

I still rock the 860 evo 250GB, although I feel like that with my new laptop coming up, I might use a new drive. Depend on how many slots there are, I guess.

WD and Seagate seem to have a few (current) offers if you want SATA m.2 SSDs.

Ultimately the best way to get extra miles out of your laptop is to dim the display (maybe reduce resolution too) and turn off the fan.

WD and Seagate seem to have a few (current) offers if you want SATA m.2 SSDs.

The PCI-e Gen4 interface on Tiger Lake doesn’t support SATA over the same interface, so we chose to support NVMe 4.0 and no SATA instead of a slower NVMe with SATA.

Like many things, being able to physically fit one doesn’t mean it’s compatible.
On Tiger Lake (mobile at least), you can’t have PCIE 4 NVMe on the same slot as SATA, so obviously Framework chose PCIE4 because that’s what most people are likely to want.

Ok. In that case I believe the most low power storage would be Intel Optanes.
Not like the Optane SSDs, those actual 32/48GB Optane sticks. Obviously you can’t get much out of it, but that would be your answer.
Other sticks should behave exactly the same.

Now, it is not impossible to have SATA on Tiger Lake. You would have a PCIe to SATA chip somewhere to handle the protocol. But if Framework didn’t put it there (or if Intel dropped support), then let it be. SATA is pretty deprecated by now anyway.

Thanks all, some good ideas to look into there. Options so far:

a) Try to source a Hynix P31 from…somewhere. It’s probably possible with some effort.
b) Investigate DRAM-less + HMB
c) Investigate Intel Optane – but probably I don’t want anything this exotic

I’m also planning to scour the benchmarks for anything that will be at least a bit cooler/less battery-draining than average.

It’s possible there’s not much difference between the WD Blacks listed on Framework’s site and anything else that’s easy to get. But let’s see.

It looks like I can get a P31 on eBay from the USA for not too much money, so I might try that. But probably an SN850 is not a terrible choice for anyone who wants something easily available.

Out of interest, is the difference really going to make that much of a difference? Are we talking single digit minutes on a charge and 2-3 degrees, or something actually significant?

Out of interest, is the difference really going to make that much of a difference?

Honestly, I suspect it will be hard to notice. If a drive is going to pull 750mW when idle instead of 4mW, I’d expect it to make a small difference to battery life. If it’s going to pull an extra couple of W under load and load goes on for a long time, I’d expect it to get hot and make a noticeable but not catastrophic difference to battery life, and probably also lose some performance from throttling.

I guess the thing is, getting the Framework DIY is an opportunity to over-optimise and over-engineer everything. And I will know I have a nice, cool, un-stressed, efficient storage device.

Out of interest, is the difference really going to make that much of a difference?

It really does make a difference, I remember reading an article from Laptop Mag testing various SSDs and they squeezed an extra hour just by changing the SSD in one case

You WANT something with DRAM so the drive can cache when it flush the buffer because SSDs can write by bit but only erase by block (especially the new high density ones)
Not having a DRAM reduce both speed and increase wear.

Yes and yes. Intel Optane is basically a technology that can both write by bit as well as erase by bit, with drastically increased durability. This means it need extra wiring (and transistors), which is why the storage density is pretty low.

yeah. so it depends more on the controller and firmware version. I might look into samsungs’ controller differences. So far I knew that the pm941 (not a) is the one used on old Macbooks. But in reality it didnt make a difference because I cannot get a working Mac OS installer.

You WANT something with DRAM so the drive can cache when it flush the buffer because SSDs can write by bit but only erase by block (especially the new high density ones)
Not having a DRAM reduce both speed and increase wear.

I have been checking amazon UK everyday for a few weeks now and this morning the 1TB P31 was available for dispatch in 5 weeks so I placed an order. (hopefully this means stock is reserved for my order when a shipment arrives at the amazon US warehouse)

Just keep checking and hopefully you’ll be able to snag an order. I’m still going to be checking each day to see if 500GB becomes available but I’ll be happy with the 1TB if I can’t get a 500GB. 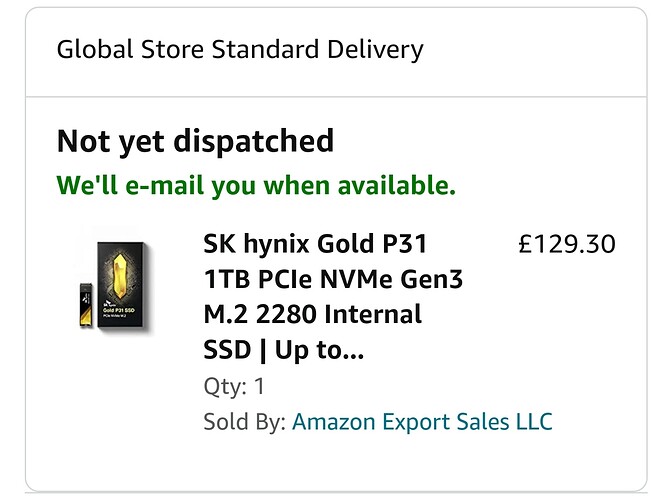 Just checked amazon again for the 1TB and it’s available for dispatch in 4-5 weeks now so I’d place an order if you still want one. 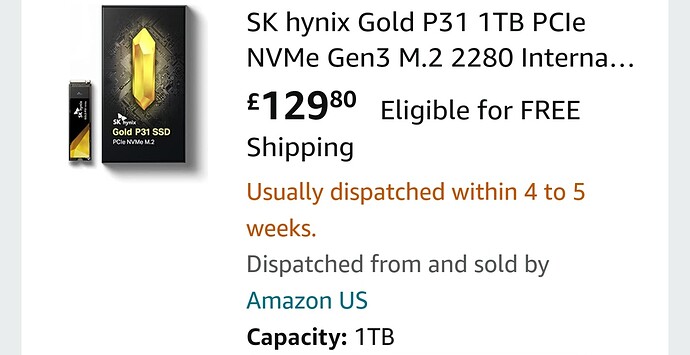 Fwiw I found that there were P31s available on eBay from the USA and they looked legitimate. The price was marked up a bit and the shipping cost was a bit high, but to me it was worth a try.

I tried to find some decent charts comparing power consumption. Anandtech does not seem to have done an SSD review for a long time. Tom’s Hardware does them but more recently has not been including the P31 on charts. For idle power usage they are showing the usage with “ASPM/LPM disabled” which I imagine on a laptop is not going to be the case for very long. Other than that the Samsung 980 Pro seems to score best on most power charts.

In fact you can combine the charts from this: 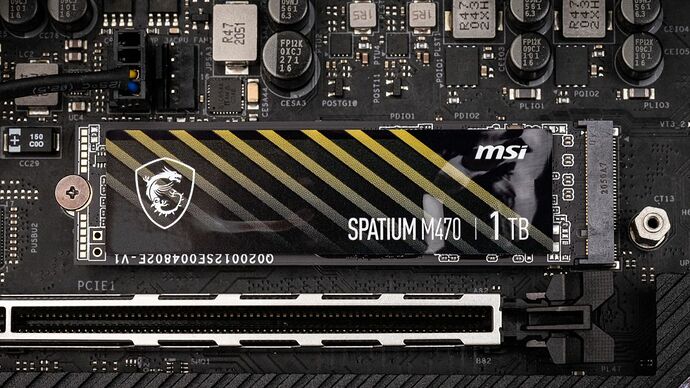 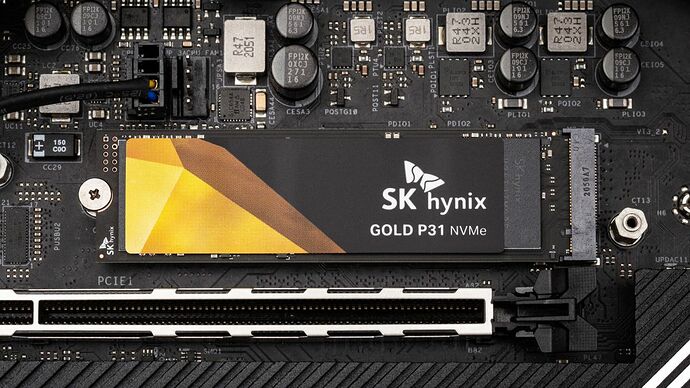 …looking at which, the WD Black SN850 actually scores better than the P31 for efficiency of a 50GB write. But the ASPM/LPM disabled power consumption on the P31 is massively lower at 359mW compared to 1530mW for the SN850.

Acquiring Hardware would be an interesting problem.

However, there are quite a lot of SSDs out there. Instead of SK Hynix I might go with Samsung, or maybe try a stick of WD, Kingston, Sandisk or Toshiba.
As I said, there are lots of variables and even the same company may produce sticks with drastic different power consumption/ratings, let alone different ones.

Note that the “max” power is the absolute maximum (10us) and happens during, say, drive bootup/refresh (perhaps charging up internal capacitor/grid for clearing blocks). Normal write is about half of that, and normal read is about 1/4 of that.

Further note is that a faster drive (e.g. Samsung 970 Pro) will be able to finish read/write operations faster (or don’t have to work as hard) than a slower drive (e.g. WD Green SN350) and therefore enter sleep/idle early, affecting total power consumption.

1 Like
Consistent Wake from Sleep Issues on Linux Edit:(5x Distros Tested)
next page →