Invite link appears to be invalid/expired

Invite link appears to be invalid/expired 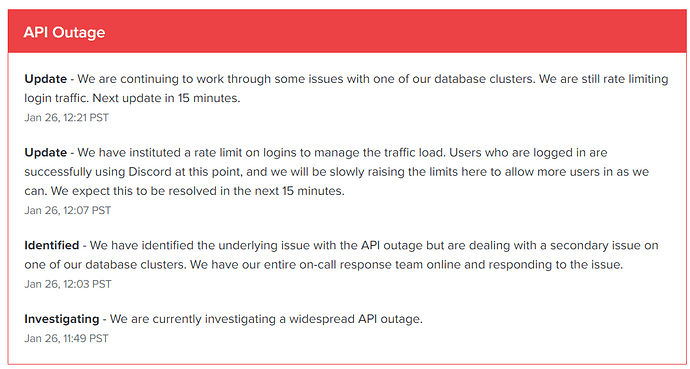 Welcome to Discord's home for real-time and historical data on system performance.

@FrameworkBee @Nandor_Hulverscheidt
As far as I see it, the choice of a real-time communication platform doesn’t have to be an exclusive one! Framework can run their Discord and use a free Matrix bridge. One of the advantages of Matrix (and other federated systems) is that Framework doesn’t even have to run their own “official” server. Everyone can join the bridged Space from their own server or any public server like matrix.org.

I bridged the Community Discord to Matrix some time ago, using Travis’s amazing free bridge ‘service’. That was a one-time setup of about one hour and from then on, it just ran with no further input from my side. There are people on the Matrix side who didn’t even realize that the space was bridged to Discord.

If you want to take it a step further you could then use Matrix as a hub and add bridges to Telegram, IRC, etc. and let everyone just use the service they prefer and still be able to talk to everyone else in the community. I think this is a very powerful tool that should not be quickly dismissed.

Unofficial IRC channel #framework on irc.libera.chat. Will look into a bridge with the other services as well.

For everyone mentioning the bridge. We definitely have plans to look into it. But, it is unfortunately not at the top of our list at the moment so we can support other initiatives! However, we hope to support it soon!

Just popped in there with an alt xmpp account I bridge to IRC with. So far it is just me and the channel bot.

@FrameworkBee Awesome! Discord seems to me exactly the right place for an extended Framework community, potentially reaching a new audience on a more widely used platform, without descending to Meta’s level of commercialism.

It will be interested to see how how Discord can be seeded so there are lively conversations there, nothing is as dead a silent channel, whether its IRC or Discord - integrations/bridges as others have mentioned may help,

Just thought it’d be worth mentioning here since it wasn’t clear to me before I joined it - the goal of the Discord is apparently to be a sort of ‘community’, a gathering place for people with (presumably) a shared interest (their Fw laptop) but to discuss largely unrelated things.

There are channels for memes, art, pets, general software and hardware, saying ‘omg cant w8 4 my lAptOp!’, and ‘wot monita shud i by?’, etc., but not anything actually particularly on-topic. I suggested a channel for people interested in tinkering with third-party expansion cards for example, but apparently it wouldn’t be used ‘enough’, whatever that means. When I joined I expected to find that, and perhaps ‘DIY hardware suggestions’, and ‘troubleshooting’, but no, none of that.

So I really wouldn’t worry about it taking over from the forum (and forcing you to sign up or miss out) any time soon anyway, since it essentially only ‘competes’ with the ‘General Topics’ section, which describes itself as:

It seems a bit odd to me, (but fine, whatever, I just left) especially since it was mentioned on the mailing list (as here) without explaining. Surely I’m not alone in expecting it to be (at least predominantly) on-topic Framework-related stuff?

@OJFord Not sure when you joined (and left), but based on feedback like yours, a “Framework” channel category was recently created for more on-topic discussion.

We love to listen to user feedback as it’s very important to us! There will be a few channels/topics, however, that we will keep native to specific platforms mainly due to the ease of access. We have thought about introducing a development channel to our Discord but right now until given certain platform updates, we don’t see a need unless we see more of our community asking for one. However, most use the forum for their developments especially due to the organization it provides.

As much as we would love to add every channel requested, we do need to ensure it will be used just from a moderation standpoint and to not overload the community with content/channels. That is why we will archive channels if they stop being used for weeks at a time to introduce new ones as we want to make this a space for everyone!

To address additional points mentioned by @OJFord is that not everybody in our community enjoys the technical side of it and why they use our off-topic channels. This is why we had recently introduced a category for more Framework related content as Feesh mentioned to ensure everyone enjoys our Discord in a way.

Our biggest goal with using Discord is to build a community, host events, and create new initiatives that cannot be used on any other platform. We offer the Forum, and Reddit for more dedicated Framework content and now our Discord Framework category.

We’re sorry to hear that the Discord wasn’t right for you and we do absolutely appreciate your feedback. We had recently launched our Discord so have been changing it as we go as we have a growing community and are learning how we can best cater to everyone!

Our biggest goal with using Discord is to build a community, host events, and create new initiatives that cannot be used on any other platform. We offer the Forum, and Reddit for more dedicated Framework content and now our Discord Framework category.

That sums it up well - I just assumed it would be Framework focussed (otherwise why am I in the Framework Discord server, not the whatever else (local, friends and family, colleagues, whatever) server?) but having had that discussion there it seems I just don’t ‘get’ Discord or use it the way most people do.

We’re sorry to hear that the Discord wasn’t right for you and we do absolutely appreciate your feedback. We had recently launched our Discord so have been changing it as we go as we have a growing community and are learning how we can best cater to everyone!

No worries, you don’t owe me anything! I don’t have a problem with it existing as it is, I’d just suggest making it a bit clearer - I joined from the newsletter ‘hey we’re on Discord now’ and it just wasn’t at all what I expected, surely it’s not just me that would imagine it to be like the forum (same sort of sections/categories as channels) just more real-time & chatty? The first response here was worrying that it would take over and forum use decline.

@OJFord Not sure when you joined (and left), but based on feedback like yours, a “Framework” channel category was recently created for more on-topic discussion.

Maybe a week ago? (And left ~immediately, having suggested an expansion card development type channel and had the discussion that it wouldn’t be used ‘enough’.)

To me, just one channel doesn’t make sense - I’d have to mute it. (I want that isn’t used ‘enough’ I suppose!) I can’t follow things I’m interested in in #framework if it’s filled with (to me) noise of troubleshooting, hardware recommendations, which distro, etc.

@OJFord It’s a channel category i.e. a group of channels.

it looks like the invite is invalid (checked discord server status, it’s fine) anyone know why?

That’s odd since we’re verified and have a custom invite. Could you try adding the server directly on Discord using the invite code “Framework”?

Discourse now has chat support built in. It works very similar to Discord.

Three years ago we published a blog post about how Discourse and the long-form forum paradigm can co-exist with the short-form chat paradigm: This kind of tooling mashup works, but it has some flaws. You end up with: Duplicate user directories...

Discourse now has chat support built in. It works very similar to Discord.

Unfortunately, we’ll likely not use it as we don’t have the bandwidth to support it at this time. It’s a really cool feature though!

10 posts were split to a new topic: Unofficial Matrix bridge