USB port turns on and off

After using the Framework laptop for some weeks, it developed an odd problem (this may have been after updating to Windows 11 - not sure).

I use this USB PD hub as my power adapter and to connect the laptop to an external monitor and multiple USB devices, including a keyboard. Amazon.com

Sometimes, after I have been using the laptop on battery, it will misbehave when I plug it back in. The backlit USB keyboard will turn on and off. I may get a warning on the computer that the USB port isn’t working. The display on the laptop screen will shrink and then return to full size. It will act as if it’s about to render the display across an external monitor… and then change it’s mind. All of this will happen over and over, as if the USB port on the Framework works for a second, then stops working, then starts working, over and over.

If I move the USB cable to a different port, it will work fine. Well, except that now a second USB port has developed the same issue. But at least it still works in the third USB port - for now.

After the computer has been plugged in for a while, I can move the cable back to the original port and it will work.

I see similar threads on these forums. (I tried to put links to those threads here, but the forum prevents me from posting more than two links… even to other posts on the same forum

)
Some of them say the problem is fixed in BIOS version 3.06. But that is not the case for me. 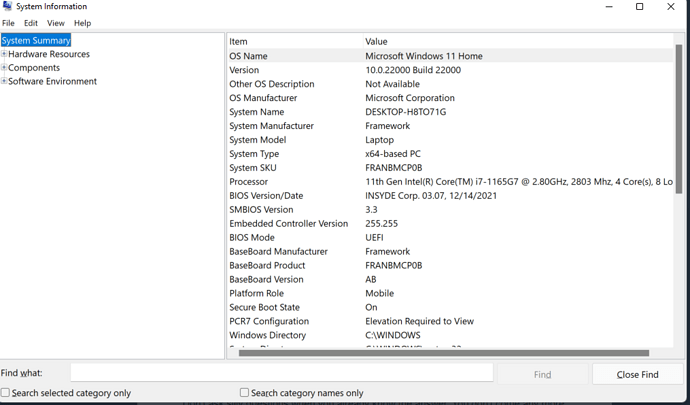 Any thoughts? I’m hoping it’s a software bug Framework can fix, and doesn’t mean my motherboard is bad.

Here are some links to possibly related problems:

New here. Batch6 with Intel i7-1165G7. My 1tb expansion card somewhat randomly disconnects and reconnects, I think while doing sustained writes. Tested on linux. Haven’t diagnosed it properly yet. So I’ll provide some probably useless info for now. While properly locked in place, the filesystems on the device will suddenly become readonly. Just before this occurs, dmesg shows a usb disconnect event, the fs failing to write a few times and becoming readonly, the usb connect event, and the reco…

(I originally posted this in a thread on display output problems, though I now think it’s unrelated. It might be related to this other post on USB-A Yubikey problems…) I’ve had a problem with a couple of external USB hard drives when plugging them into one of the laptop’s USB ports. The drives get power but no data. At least, the drive doesn’t appear in the list of drives, but its light stays on. I’ve tried swapping the USB-A framework expansion cards (I have two), but the problem only happ…

One of the four internal ports is not reliable Community Support

Update on update on update: Framework Computer Inc sent me a replacement mainboard. After following Mainboard Replacement Guide - Framework Guides everything seems to be working fine at the moment. Top service. Thank you.

Michael_Wu (in the second thread) is currently investigating if replacing the motherboard fixes the problem for him.

Hi @Chad_Schultz. I would recommend submitting a ticket to our support team here: Framework | Support so they can ensure your laptop is performing as intended!

Thank you and stay safe!