Debian 11 on the Framework Laptop

Hello. Framework has the hdmi add-on card you could use, instead of using a separate dongle. As for the wifi, the one I’m using is the QCNFA222, which is supported in Debian via atheros 9k driver. So far it’s been working well, but I haven’t been able to get bluetooth working. 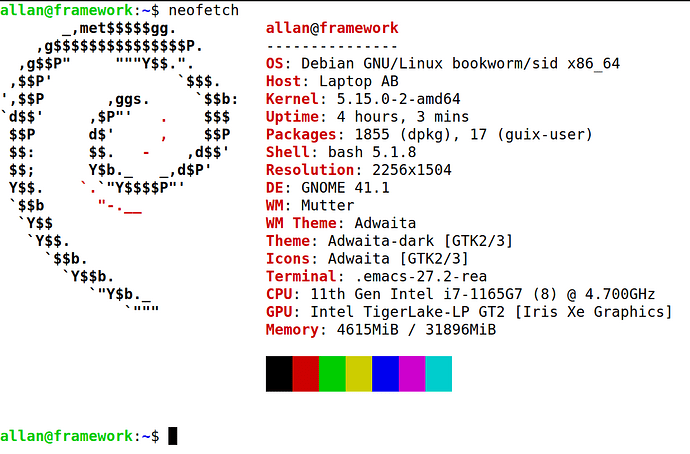 Is the expansion card known to work with linux?
Im in a little over my head on this one. My desktop ran debian for years with dual monitors, but that was through the graphics card that had dual out.

My research has lead me to believe that usb c to hdmi involves a converter chip in the dongle that requires a driver. Theres a company that sells dongles called displaylink that has linux drivers available, but I dont have that brand. I dont know. Im guessing a little. My dongles both work on my android tablet, which would suggest a driver exists somehwere. Displayport seems to be a much more native usb c spec. Its probably time to upgrade.

I tried the HDMI expansion card when I got it and it works just fine (Debian sid). Since HDMI is a standard, all of the conversions should be happening in the expansion card itself (and I don’t think there need to be any special drivers?). When I plugged in a monitor (a TV in my case, since that functions as a spare monitor to test this sort of stuff), everything ‘just worked’ (including HDMI audio routing).

Use Dell da200 usb-c adapter and Dell wd15 usb-c dock to do the test, Gpd pocket… can identify the usb-keyboard and usb mouse attached to the dock. But it can't see the monitor on the hdmi port of the dock. No new monitor in display settings. gpd pocket with ubuntu 16.04 newest patch from this repo newest kernel from matula repo (2018.1.26) hope it helps, thanks for your hard work to make ubuntu on gpd pocket usable!

The guy who wrote some kernel module code to get it to work, says some dongles just dont work. Ive tried all the stuff he mentions in that thread.

Ive actually got 3 dongles. Ones built into my hub. I really want dual 1080p monitors when Im home, so I have a dual hmdi out dongle. I dont to tie up 2 ports with single use cards. Finding that one unicorn dual hdmi dongle that works seems like too much of a scavenger hunt to me.

If I cant have dual monitors, Id rather upgrade from 1080p and just get a new setup that has something more modern that hdmi. I was just hoping a $20 dongle would work.

Also, don’t let it discharge completely, it won’t turn on again unless you follow a bunch of steps (15m minimum). See:

Does anyone have thoughts on how to properly configure a Linux distro to prevent this happening? There are two ways computers ‘sleep’ with Linux (at least with systemd.) They can suspend, which means saving state in memory and entering low power mode. And they can hibernate, which means serializing all memory to swap and then completely shutting off. The problem here seems to be with batteries draining when a computer is suspended, but not hibernated. However, as far as I can see, Fedora, with d…

I’d like to get Debian setup on my Framework DIY. Just thought I’d summarize what I think would be needed, maybe it would help others. Does below sound right?

Blog post for getting Debian running on Framwork, the fingerprint reader part seems to be of interest.

I recently received the fantastic first laptop from a new company called Framework, which is specializing in building extremely user-serviceable, repairable, upgradeable laptops (in fact, they recently received a rare 10 out of 10 from iFixit). I...

I did have a question as to which kernel might be the better choice, reads like there might be issues with 5.12 as well as 5.14 there seem to have been reported issues with both. But it looks like anything below 5.14 is end of life.

Also concerning secureboot, looks like since Debian 10, secureboot’s worked out of the box. Looks like we wouldn’t have to mess with that option in BIOS, should just work.

Before you do anything, install Windows 10 on it and make sure you upgrade its BIOS and hard disk firmware.

That’s a good point, I had already installed the drive into a Windows machine and updated the firmware. I figured I’d go through with the bios using the EFI shell process.

What version of libinput are you running?

This is very generic - what 5.14 specifically?

@Carlos_Fernandez_San Did you have to compile that version? I’m not finding it in any of the Debian repositories.

This is very generic - what 5.14 specifically?

5.14.0-0.bpo.2-amd64 is the highest available on the backports repository at the moment.

Did you have to compile that version? I’m not finding it in any of the Debian repositories.

Make sure you have the backports repository enabled and search for linux-image and the options will show up.

Ive been exclusively on debain as my desktop for maybe 5 years…Im familiar with all this stuff on paper, but I dont usually go fiddleing unless I have to. I’d like to get back on a LTS suported kernel asap so I dont have to think about it anymore…

@Carlos_Fernandez_San t I’m searching all the packages on packages.debian.org and not seeing anything newer than the the 5.14.0-0.bpo.2-amd64 that Ryan Horst mentioned, which looks like 5.14.9

5.14.0-0.bpo.2-amd64 is the highest available on the backports repository at the moment.

That one doesn’t work well. For me Wi-Fi worked, but sleep/wake up didn’t.

Ubuntu being based on debian - with a bit of luck it will just work for you.

That one doesn’t work well. For me Wi-Fi worked, but sleep/wake up didn’t.

Ubuntu being based on debian - with a bit of luck it will just work for you.

Im hesitant to try that. Im reading up on either making the jump to bookworm (testing) or using apt pinning to upgrade just the kernel which is up to 5.15…which is were I think I would rather be…Sleep is buggy for me, Id like to fix that, but its not a deal breaker. I think I could really care less about the fingerprint reader. If it could enter my disk encryption password, Id be into it, but 90% of the time my laptop lid is closed and Im on a dock…so I would rather type a password than open up the lid to read my fingerprint…

Im hesitant to try that.

Why? It either works or it doesn’t. It takes a few minutes to try, and grub lets you choose between installed kernels so it’s not like if it doesn’t work it takes a lot of effort to just remove it.

Im hesitant to try that. Im reading up on either making the jump to bookworm (testing) or using apt pinning to upgrade just the kernel which is up to 5.15…which is were I think I would rather be…

I’d agree. I can’t say I particularly like the idea of installing a kernel compiled by another distro. When does it stop being Debian and become Ubuntu? Who knows what options they’ve enabled. I’d most likely either grab the source for 5.14.21, pull the config from my current Debian kernel and compile it myself, or go with pinning and install the kernel from testing.

I’ve gone to Ubuntu (21.10) as Debian 11 (still) required a lot of tweaking for HiDPI support and with external monitors I couldn’t find an acceptable configuration. This needs constant tweaking for each new app and breaks with upgrades (custom .desktop files, gconf fiddling etc.).
Blurry apps (including Firefox, Thunderbird, Signal, Telegram which I use the most), long boot time (often required because of the battery issues-still doesn’t last >1d on suspend) were all dealbreakers for me. Having heavily outdated browser and email applications also means keeping those installed manually - not practical anymore for me on this system as a daily driver.

@Darrel_Hunt I suppose you do have the backports repository enabled in Debian ? Otherwise you won’t be able to install any “bpo” packages.

Who knows what options they’ve enabled.

You can trivially find out all the patches and compilation options they used.

Anyway I pointed out to what works perfectly, if you prefer to compile your own version, or wait for Debian to make a new official backport, or just suffer the old one, fine by me…

I have identified, that image: https://cdimage.debian.org/cdimage/unofficial/non-free/images-including-firmware/daily-builds/sid_d-i/20220115-3/multi-arch/iso-cd/ works great!

just so you know, pals.

By the way, setup says, that it cannot install kernel, just skip it on base install step and proceed. When setup wants to reboot after software and grub install, select ‘go back’ and select ‘exec shell’ from main menu, and when you are in a shell: