Expansion cards compatible with other devices?

Since the cards are all based on usb-c/thunderbold, would it be possible to use them in other devices as “normal adapters”? For example, if I have another laptop without HDMI output, I could plug my HDMI card into the thunderbolt port and use it there? Or possibly in smartphones (e.g. the SD or memory card) Or are there software or hardware restrictions that prevent this?

Yep! You can use them with other devices. As long as the other device supports the same capabilities needed for the expansion card.

Does that mean that the Storage Expansion cards can just be plugged into the USB-C port of another computer or even a smartphone to copy or transfer files?

Yes you can plug the storage card into your phone or another device.

Sorry to revive a dead topic, but has anyone tested to see if the storage expansion card will work with the nintendo wii? I know it would need to be adapted from usb-c to usb-a, but I’m curious if it will work. The wii can have compatability issues with external drives when it comes to loading games off external drives via USB Loader and the Homebrew channel, and ideally I want to have one drive shared between my wii and my laptop so that I can easily swap it over to the wii if I want to play it on real hardware and swap it over to my laptop when I want to emulate it.

I’ve been in the Wii Homebrew scene for a while, and it is pretty confusing. For the most part, any HDD will work perfectly fine with USBLoaderGX on the Wii. However, this is not the case for the WiiU, and my WiiU only loads games in vWii mode when it is connected to an external SSD (with a Y-splitter cable!).

I would not recommend loading games off of a flash drive for either the Wii or WiiU. It’s always been finicky and you’ll have games that refuse to boot every now and then. You can use an SD card to load games off of, but only with loaders such as WiiFlow. Additionally, for the drive to be compatible with your Wii, it needs to be partitioned as MBR and formatted as FAT32, neither of which is really ideal for use with your laptop.

I understand the convenience off having a game drive that you can share between your laptop and Wii, but I really would not recommend using the Storage Expansion Card for this purpose. While it is more expensive, the proper solution is to use an HDD or SD card that is for dedicated use with your Wii. Additionally, try to use a USB 2.0 cable when connecting the drive to the Wii. USB 3 cables are technically backwards compatible, but they don’t always work right.

I personally use a Toshiba HDD (MBR and FAT32) in this enclosure with this USB 2.0 cable, and it works perfectly in my Wii. If you want to buy a drive that is guaranteed to be 100% compatible however, here is the full compatibility list. Make sure to plug it into the proper USB port as well.

Nothing is preventing you from trying out the Expansion Card, but I just wanted to give you some tips that I’ve picked up.

Okay, thank’s anyway. I’ve actually encountered issues in the past loading games off flash drives, leading to corrupted flash drives that had to be reformatted. I do currently have a hard drive (a WD elements 1TB drive to be exact) hooked up, though it is with a usb 3 cable that does work fine (been playing some LEGO Indiana Jones 2 on it recently). I was just wondering, though I guess if I do use separate drives, that could mean I could actually take advantage of nkit files on emulator and not have to split up large games on that drive while I do have to for the Wii so I can run Gamecube games (which requires FAT32)

Hello, I’m another user that’s had a softmodded Wii since the “Twilight Hack” days before the Homebrew Channel was a thing (you may or may not have seen me around on places like GBATemp under the name “Nintendo Maniac” which, fun fact, is was the “NM” of my username originates from).

Anyway, I too had major major issues getting USB flash drives to work and so, since I’m a PC hardware enthusiast that always gets all of my friends and family’s “hand me down”/other old PCs, I had a slew of 2.5" drives laying around. I figured that, if I could find a USB to 2.5" SATA adapter that worked then, in theory, I could use it with any 2.5" SATA drive which would also allow me to connect it directly via SATA, eSATA, or whatever future connector via an adapter (e.g. USB4).

I’ve been using the following vantec drive and I similarly recommended it to a family friend for it own Wii and Wii U systems, and it “just works”: 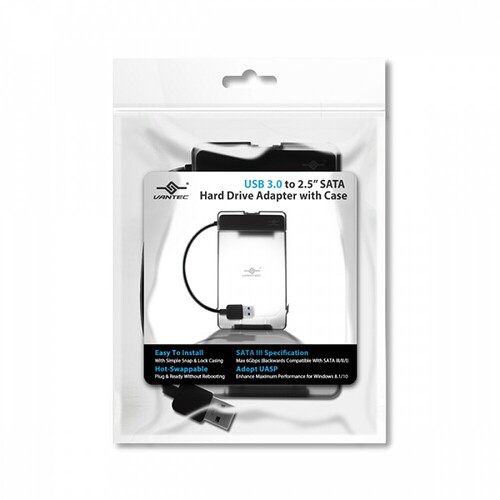 Protip, it’s only $7.99 at Microcenter and, if you’re a new customer, you can similarly get a free 240GB or 256GB SATA SSD (I believe it’s DRAM-less, but that’ll hardly matter for the Wii):

New Customer Exclusive! Sign up to get your coupon via text. Limit one coupon per person. One time use in-store only coupon. While supplies last.

Lastly, you can actually have multiple partitions on a single drive and USB Loader GX will see both partitions, so you can have an NTFS drive for Wii games and a FAT32 drive for GameCube games. I think you might be able to use exFAT specifically for Nintendont as well, but don’t quote me on this as I have everything on a single FAT32 partition since the only Wii games I have that take up more than 4GB in wbfs format are Smash Bros Brawl, Metroid Prime Trilogy, and Metroid Other M (the latter of which I don’t own the disc for but rather my friend’s father does… or at least did? said friend can’t find the disc anymore)

…also I find it interesting that you say “take advantage of Nkit on emulator” when Dolphin does not actually full support Nkit due to it causing various issues (the easy go-to example is that Super Paper Mario straight-up doesn’t work, though that’s obviously a Wii game), and even Nkit itself will be (if it hasn’t done so already) basically superseded it with the newer RVZ format as newer versions of Nkit will create RVZ instead.