How much TDP does framework give it? because the TDP is adjustable, up to 25W. If it hit that score on a 20W tdp budget, that’s very nice.

hm.
Can you see the core temps? because if it indeed is using 28W it make less sense that a smaller chip with less wattage beat it. unless it throttle

Yes. As I recall, on a single-core load I once saw a brief spike to 95°C for a second on one core before the fan kicked in and the CPU frequencies adjusted. This is in line with what @nrp suggested would happen on a heavy load, a brief spike to about 100°C before it settled in.

On 100% full load all cores it would settle down to 82°C exactly. At first it revved up to all cores 4100 MHz like the specs state, but it did slow down to all cores 2800 MHz, so maybe there is throttling going on. 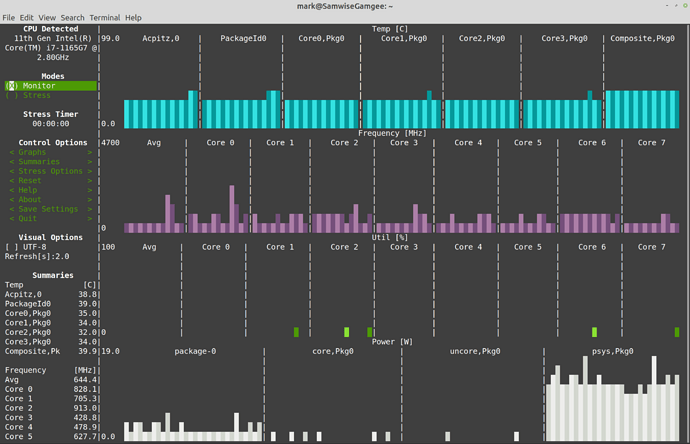 Scrolling down to see the power data on the lower left: 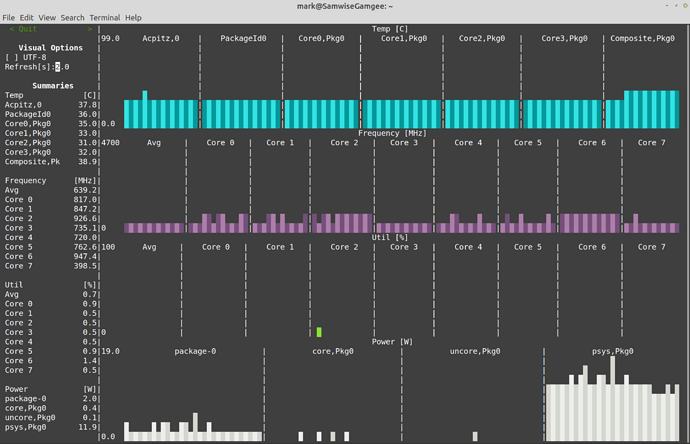 before the fan kicked

either it’s a fan curve tuned for quiet rather than cool, or the thermal is indeed insufficient.
on a sufficiently cooled system like GPD I don’t think you will ever see temps past 90. Like, ever. And during performance-demanding tasks the cores will be around 70, if I remember correctly.
I’m kinda disappointed. However, I have to say that it’s at least better than XPS 9360, which is a plus.

Did you do this plugged in?

Did you do this plugged in?

Huh. I guess there is, I’m way down the list?

The only thing I did that might impact performance was install TLP, but that should get out of the way on line power.

I’ll delete the Geekbench results from this thread then. I’m inclined to delete the rest since they may not be valid, but they seem to make sense and I have no way of knowing.

I don’t think you will ever see temps past 90.

Momentarily spiking to 100 before settling in to the low 80s is expected design for this chip set.

The transistor density between the 2 processes actually favors 10nm

I’ve really screwed up this thread and reached all sorts of incorrect conclusions.

I’ve requested it be deleted.

I’ve really screwed up this thread and reached all sorts of incorrect conclusions.

I mean, based upon the other benchmarks I remember seeing at tiger like launch, 1165g7 is the king in single threaded performance compared to any laptop sku

So that’s on the money, and given the clocks and IPC are higher than 4th gen, I don’t see why it would be unreasonable to suggest it’s a more performant CPU than 4790k

I really just skimmed the thread, where did you screw up?

@Fraoch, there’s something a bit off with your Geekbench v5 score / Linux tuning? https://browser.geekbench.com/v5/cpu/search?utf8=✓&q=framework+1165g7&dir=desc&sort=multicore_score

Some of those geekbench results you see here were from when I was testing an issue I was having with the cpu throttling.

MAJOR DISCOVERY This post gave me the idea: https://askubuntu.com/questions/1120472/ubuntu-slow-when-laptop-connected-to-power I switched the power supply out. I was using the framework power supply and I swapped it for a RavPower PD Pioneer 90W Model RP-PC128 which supports the following PD modes: 5V3A, 9V3A, 12V3A, 15V3A, 20V4.5A, 90W Max and my performance issues are all gone! Here are the results: Plugged in, starting with 100% power Trial 1: https://browser.geekbench.com/v5/cpu/104…

I would be interested in the results of your test if you redid them with a stronger power supply.

There is some anomalous performance behavior going on when the laptop is plugged in and charging with a less powerful power supply. In fact, my on-battery performance was better than the geekbench results you have above there, and using the framework power adapter my scores were inline with what you got. It’s all detailed in that thread I linked above. This might explain your benchmarking results.

There is actually a meaning here.
The smaller the transistors, the less amount of power it uses (at least, to my knowledge), and the less heat it generates.

The density is completely irrelevant. You can stack transistors, even layers. It just doesnt make a lot of sense in the end.

And thus, the 7nm will beat 10nm because it generate less heat and use less power, and therefore pound for pound, 7nm wins. And yes, if you put a refrigerator on top of the 10nm, it also wins.

There is actually a meaning here.
The smaller the transistors, the less amount of power it uses (at least, to my knowledge), and the less heat it generates.

The nm in the process name don’t relate to any real world measurements anymore. Its just a marketing name at this point. There is nothing in a 7nm transistor that is 7nm long. A 10nm process can be better than a 7nm process from another manufacturer. Its just a name and says nothing about how good or efficient the process is. The fact that tsmc 7nm is more efficient than intel 10nm is nothing to do with its name. It could also be the other way around

Btw smaller transitors a higher heat density. If you decrease the size of your transitor by lets say 50% and double the efficieny you also increase the transitor density by a factor of 4 (size of the transitor squared). In other words you chip only consumes half the power but has double the heat density as before. Things would only get worse if you add more layers and build 3 dimensional. As a result your chip with a higher transitor density is way more difficult to cool at the same total power consumption. Thats one of the reasons why the heat density and total power consumption of modern processors is now way higher than lets say 10 years ago despite being more efficient

The density is completely irrelevant

Excuse me lol, how exactly do you think we have managed to get such giant core counts in such little packages

You think a modern CPU core count can be constructed on a process node from the early 2000’s and still be the same size package? Nope, not gonna happen, regardless of power draw or heat output(although that also would balloon) the physical size of the chip would be much larger

Do you know the difference between TSMC’s 16nm and 12nm process node? Not much-it’s more akin to intel adding another + to the end of their 14nm process than a true evolution or die shrink

As @_Asic was saying, you cannot compare process technologies between manufacturers

I suggest AnandTech or AdoredTV if you’d like to learn more-TechTechPotato is another good resource(Dr. Ian Cutress of AnandTech runs that channel)

I’m not going to suggest that Intel is god tier or that AMD is god tier, both are great imho-I’m glad Intel is finally moving off of 14nm tho, it was a workhorse but it was time to move on

Another benchmarking point regarding graphics, Unigine Heaven run on the Phoronix Test Suite. Same systems as the glmark2 benchmark but different results… 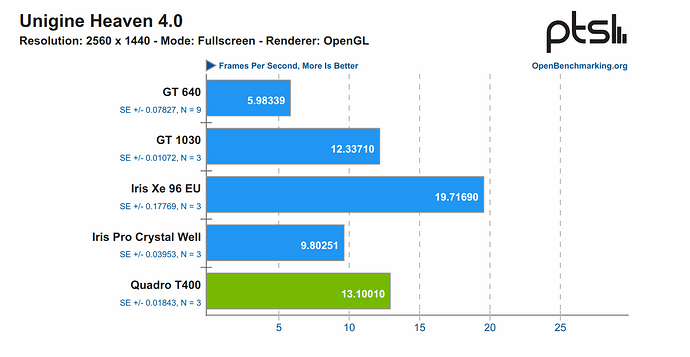 User benchmark is complete trash, not a slight against you-just the site

If you want to benchmark your laptop that’s cool, just use reputable tools is all

That’s very solid. I didn’t run it on the 1135G7 but I think the results are somewhat similar.

it is not complete trash. especially since it gives percentiles of the same components you have, so you don’t need a special program to see if your CPU is throttling or whatever. Or, grind away layer by layer the motherboard to see how the optimizations, connections and components they use. (e.g., cheaping out with PCIe 3.0 2 lane instead of 4 lane)

Either that all benchmark is trash, or that none of them are trash. Each benchmark has their specific algorithm and some bench might benefit from certain aspects while some might suffer. The point is to have some common metric to compare to.

it is not complete trash.

Yes…yes it is. Ladies and gentlemen, I give you…UserBenchmark

Find me a reputable reviewer that uses it as a tool

Seriously, UserBenchmark IS terrible, the results in no way align with any other reviewer, so either UserBenchmark is the lone voice of reason or its results are badly out of alignment with reality

Here’s another result that is completely unhinged