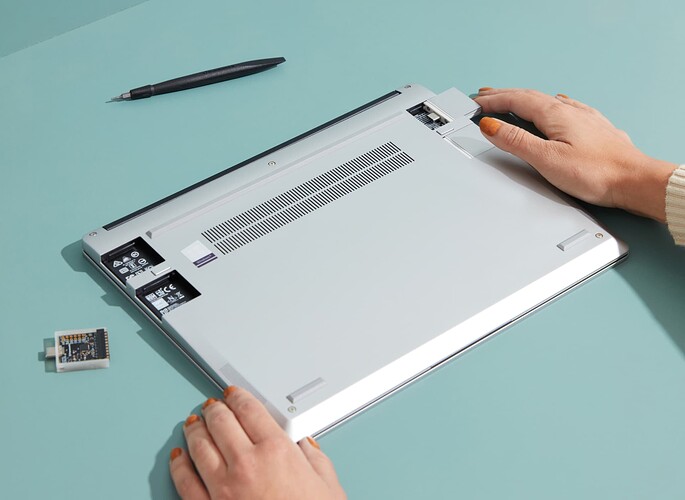 blog2216 - Framework Laptops are now Thunderbolt 4 certified1920×1400 86.4 KB
Framework Laptops with 12th Gen Intel Core processors (including the Chromebook Edition) are now Thunderbolt 4 certified on all four Expansion Card bays when updated to our next firmware release. This makes it the laptop with the most Thunderbolt ports on the market. You may be thinking, didn’t the Framework Laptop already have Thunderbolt? Since the original 11th Gen systems we launched last year, we’ve built in all of the necessary hardware (retimers, USB-PD controllers, power circuitry, and connectors) to be able to support both USB4 and Thunderbolt 4, and have been working through the certification process since. In practice, we’ve seen community members using Thunderbolt and USB4 docks and eGPU enclosures successfully anyway, but we wanted to be sure to make support official.

Justifiably, Intel has an extremely rigorous specification and set of testing requirements for Thunderbolt certification. With support for an insane 40Gbps of data transfer, 100W of power delivery, and the ability to drive USB4 and tunnel protocols like PCIe and DisplayPort, Thunderbolt is unbelievably complex technology. When we ran certification testing the first time around, we passed hundreds of test cases… and failed dozens. We’ve worked with our manufacturing partner and chip suppliers over the last two years to address each test failure through firmware modifications, and now have fully compliant firmware and hardware!

This means you can plug in your Thunderbolt displays, docks, graphics enclosures, and other devices with greater confidence that everything will work properly. Thunderbolt and USB4 have very tight signal integrity requirements, so you may find that if you’re using a cable that is marginal, you can still run into issues. We recommend testing a different or shorter cable if you run into flakiness.

We’re currently preparing our 12th Gen 3.06 firmware update for release that contains the updates for Thunderbolt 4, a range of security fixes, and improvements in both suspend and active battery life. We’ll share more on that last part in an upcoming blog post. We’ll provide instructions on how to update firmware for both Windows and Linux. For the Chromebook Edition, firmware updates happen automatically through ChromeOS system updates. For 11th Gen systems, we also have a firmware update in progress to bring in the security updates and power consumption improvements, but not retroactively certify Thunderbolt (there are some test cases we don’t believe we can resolve on that generation, unfortunately).

We’re excited to continue to improve hardware we’ve already shipped through firmware updates, and we’re looking forward to seeing what you think!

Are you able to let us know what test cases/guaranteed functionality the 11th gen models are lacking even after the firmware updates? I’d love to know what couldn’t be done if possible.

I personally haven’t had any issues with Thunderbolt on my 11th gen i5, but I know that’s not the case with everyone. Thanks!

Sad for the 11th gen, but hurray for Frame.Work over all. Good job everybody!

How will the update be distributed?

@mahe They usually distribute BIOS updates here on the forum. At least, that’s where I’ve been getting mine.

excellent news! just received my 12th gen today so seeing TB4 certification (along with the associated bios update) is icing on the cake.
full 4 ports of TB was actually one of the buying decisions.

What does this mean for my 11th Gen? Are early adopters going to be supported?

As someone who has done extensive power usage tests with the 12th gen, I can say I am delighted to hear those news, and I have high hopes it will improve the rather problematic situation of the expansion card power usage (especially on standby).

I do have to ask, however: the update will be available on Linux (yay!) but will it be distributed with the (de-facto) standard LVFS mechanism? It’s still unclear what Framework’s position is on this (cf. Framework firmware on the LVFS?) right now…

Man, this 11th gen thing is quite a let down. My bad for believing a startup

This is like, the second or third time I have seen you be non-constructively negative at Framework on this forum. As for everything else, they prob can’t say, NDAs and all.

That’s it? You need to hang around more.

Statements like yours is why I don’t hang around here much. I try to help and provide advice where possible, but extreme unwarranted negativity is why I don’t enjoy being on this forum. We’re getting pretty offtopic, though.

@nrp This is amazing news. Can you elaborate on what firmware changes towards Thunderbolt 4 compatibility are coming to the 11th gen laptops.

Always nice to see the value of a product being backed by (Official and Respectable) Industry Certifications.

We’re currently preparing our 12th Gen 3.06 firmware update for release that contains the updates for Thunderbolt 4, a range of security fixes, and improvements in both suspend and active battery life.

This is all amazing news! Can’t wait for the release

This is a quote from the framework subreddit

To offer some insight into 11th Generation Intel Core, Thunderbolt devices may need to be unplugged/replugged when powering on or resuming from hibernate, or after powering on the system.

Also if powering the mainboard from a thunderbolt dock in standalone mode (without battery) The dock or peripherals attached to the dock may not be fully recognized, or may enumerate at the wrong speed

It started with my 14 month Ugreen Gan adaptative mini power 65W charger that I used without a problem with thinkpad E590. It started to unconnect then reconnect, which is normal behaviour when you plug two device to the multi USB power supply. Also it does it One time , I guess to adapt the power but then it does it in a LOOP every 2 seconds it disconnect and connect power ! So I ordered an Anker power supply and it does the same thing after wakeup from sleep when I open the lead of my lapto…

For 11th Gen systems, we also have a firmware update in progress to bring in the security updates and power consumption improvements, but not retroactively certify Thunderbolt (there are some test cases we don’t believe we can resolve on that generation, unfortunately).