Laptop won't power on unless i plug in AC power

Yes this resetting is an embarrasment. I hope there is going to be a solution.

I think there is a partial fix in the next BIOS / Firmware upadte that at least doesn’t require resetting the RTC.

I don’t need to reset the RTC as it is now. I have to connect AC power. I want a solution that doesn’t require me to connect AC power each time I go to use the laptop even though the main battery has plenty of remaining power (and also require manual setting of clock).

I don’t understand what the reset is supposed to solve as it doesn’t fix the issue of requiring the AC again in the next 2-3 weeks.

Yes this seems all down to the RTC going flat and not ‘sparking’ up the engine even with loads of fuel in the tank.

To this query, namely, this apparently dysfunctional RTC there is a dedicated topic.

I have been having some issues powering on my laptop for about a month. Every weekend, I try to turn on my laptop, and it refuses to do anything. Some mixture of removing parts like the SSD, RAM, or WiFi card seemed for a while to help, but every time, I would still need to plug in the laptop. After contacting support, they said that the RTC battery was likely dead, and to leave the laptop charging for 24 hours for the RTC battery to recharge. The battery is rated for 3V, but after charging fo…

Just to note, there seems to be two paths to start up the laptop once RTC battery is drained:

Support asked me to perform several troubleshooting steps, then offered to swap my main board but then after additional prodding, admitted the issue will not go away even with a new main board. They stated “This has not been an issue for the majority of customers” which means this has been an issue for at least SOME customers. I strongly encourage everyone in this thread to open a ticket letting them know you do not agree.

Does anyone else feel like framework has been evasive in admitting this is a design flaw? It took several back and forths with support before they finally admitted that there is no hardware OR software fix planned.

Hi I presume you are referring to the fact that the RTC discharges so quickly that it can’t support a power on.

That
a) it requires external power to up the voltage on the RTC to enable power on and
b) in the exteme case that the RTC voltage drops very low it needs removing, replacing and the latop put on charge for 24 hours to get the RTC up and running.

I want to be sure as I have this other topic trying to clarify that it is all down to the rechargable RTC not being fit for purpose, when the latop is switched off for a week or two.

I have been having some issues powering on my laptop for about a month. Every weekend, I try to turn on my laptop, and it refuses to do anything. Some mixture of removing parts like the SSD, RAM, or WiFi card seemed for a while to help, but every time, I would still need to plug in the laptop. After contacting support, they said that the RTC battery was likely dead, and to leave the laptop charging for 24 hours for the RTC battery to recharge. The battery is rated for 3V, but after charging fo…

rechargable RTC not being fit for purpose

This is the exact issue. Is there unusually high idle drain from the main board that made framework choose this rather than a traditional multi-year design that other computer makers use? I don’t understand why they won’t admit this is a problem.

Compare to a 12 year old ThinkPad and it’s pretty embarrassing.

Exactly. It is one of the questions I am going to ask. How come the RTC can be drained so quickly ~ it must be a flaw.

More that 2 to 3 years with a non rechargeable 2 weeks with a rechargable. Apart from tottaly inconvienient the RTC will wear out very quickly so where is the advantage?

But given how quickly they designed and made an otherwise oustanding machine I suppose something had to go wrong.

I don’t want to take away from this. I wanted this to be a machine I keep for a really long time and support the framework mission of transparency and repairability. The build quality is great but my experience with CMOS and laptop clock batteries has been that it’s so rare that I have to replace them that I just can’t understand what is going on here. I’ve never had to manually set time on any tech I’ve ever owned as much as I have had to on the framework laptop. It’s just a super poor user experience so much so that I don’t even want to use the machine anymore.

The transparency… Or lack there of is the biggest concern I have given how framework started.

I think, here on the forum, it has all been said, how disappointing this issue unacceptable and upsetting for some users.

UK time here. Hope you can relax for a while.

I think most people won’t find the RTC thread by searching and instead will find this one when searching for the symptoms of the framework laptop not powering up unless it is connected to AC power. Since the discussion is continuing in the other thread, I thought we probably need to link to it again:

If that is really an issue then yes you are correct but isn’t that inevitable. I really don’t care about the waste only about people being upset because they feel ignored or abused. It’s not about money or material resources. Does anyone have the strength to realy care, not for me or for you but for their own integrity, because I don’t want to associate myself with people who don’t care. If the business is truely about caring then it may stutter, if it’s about money it’s already dead.

I had an unusual issue that occurred with my Framework laptop.

I have not used my Framework laptop for almost a month. Last night I decided I wanted to charge the battery the format a external drive to use as I want to dual boot with Windows and Linux with the laptop. I connected the power supply and noticed immediately the battery charge light didn’t turn on. So I attempted to turn on the laptop and nothing, not even the power light on the finger print reader/power button came on.

I removed the modules except for 1 and nothing… Tried connecting the adapter directly to the port and nothing. Next I thought it was the battery so I took the keyboard off but also check the connection on it and it was good. Disconnected the battery and reconnected the power and nothing. So I look at the CMOS battery thinking it could have gone bad and I need a replacement but then I saw it said rechargeable. I decided to take the CMOS battery out and waited 10 seconds to take a gamble and see if the CMOS needed to clear.

Put the CMOS battery back in and connected power back and the charge light came back on and I can turn on the laptop but it take a little for POST to kick in but it is working now.

I just found it odd. Could the reason be is because I had it not used it for so long and the CMOS battery needed to be recharged and/or reset by removing it?

Has anyone else experiencing similar issue?

Yes this is ‘normal’ will add a link

I have the same problem. Contacted the support and they ask me to do an RTC battery reset, it worked for a short while but eventually I couldn’t power on again. Then I read that it was the BIOS that caused this. Updated to 3.07. Still doesn’t help. Have you managed to solve the problem? @Stephen_Manis

This CMOS battery pull is required in the case where the Intel processor is in that ‘stuck’ state, caused by low CMOS battery voltage…if I’m not mistaken.

In some cases, the processor doesn’t get into a stuck state, and the CMOS battery pull is not required. Just need to plug in the USB-PD.

Current known workaround to avoid either cases all together is to make sure that you:

It’s a design fault. Waiting for framework to come up with a fix.

Fingers crossed. Otherwise return it if you can or sell it before it gets out to the mass tech media.

or sell it before it gets out to the mass tech media.

A really unpleasant bit of advice, to encourage someone to be devious and to load another person with the users problem ??

A really unpleasant bit of advice, to encourage someone to be devious and to load another person with the users problem ??

So we agree it’s a faulty product?

So we agree it’s a faulty product?

I have no problems with the product. The issue I have is not knowing before hand that the RTC battery may discharge in little over a week in some circumstances which encumbers the user to effect a workaround.

It’s the lack of prior information from Framework before purchase that see as being irresponsible given I consider many may not use a laptop for weeks and on occasion for weeks.

However this doesn’t effect me as I use it daily.

Where the problem will arise for me is as time passes and the RTC dies of it would happen more often and if I buy a future laptop I can’t happily put this away and bring it out a few years later to use it, as I can will my 25 year old Dell.

So yes I agree there is a lack of prior information but that’s all and of course you don’t seem to have a problem with that as you encourge to pass this lack of concern on.

What may be worse is you and anyone who acts in the way you suggest may be even more questionable as Framework can argue they never let the prototypes sit around for a week or two to see what happened, so they were ‘ignorant’.

Put the CMOS battery back in and connected power back and the charge light came back on and I can turn on the laptop but it take a little for POST to kick in but it is working now.

I also wanted to add to this. The reason the laptop takes more time than usual to load on first boot after reseating the RTC battery is that it has to retrain the RAM. This also happens on desktops when changing RAM, or I believe when clearing CMOS on those as well, and will take longer the higher RAM capacity is in the system.

Below is someone’s blog about this issue. Thanks, someone! I plan to use this page as a secondary reference source (it’s like a second option, not a primary source) for this topic on the Framework Wikipedia. 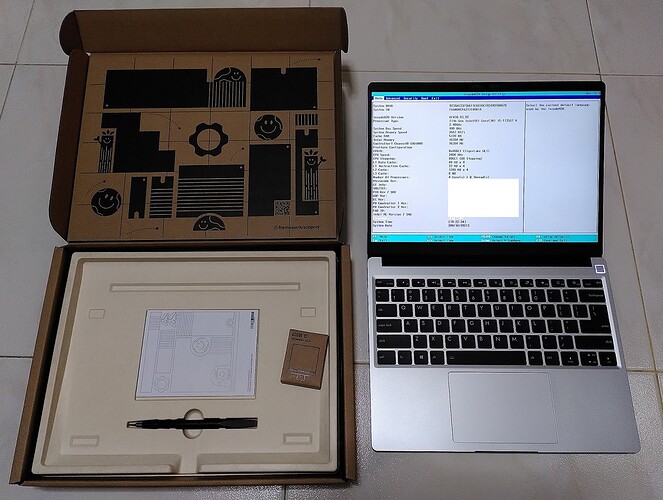 Review, usage and repair of the Framework laptop

I finally received the Framework laptop, said by many to be one of the most repairable and modular laptops made so far. Tons of professional reviewers and Youtubers have already given their opinions and made teardown videos. Instead of mimicking what...