The main 15" thread has a lot of talk about possible features, but has become a bit too long to read through. So here’s a quick questionnaire to see what’s most relevant to most of you.
Edit: polls can’t be changed later, so hopefully a thought of the most important things.

Since I can’t edit the poll, another one for prefered screen size:

I think having a dedicated high end (gaming) GPU should be left for a later revision. Due to thermals, it would require a more thicker laptop which would lead it to compete against the (still reasonably customizable) high end laptops.

maybe 16" would be a good compromise between the 15" and 17" crowds. That way framework wouldn’t have to design 2 laptops

I want to fill this out, but I think what I would like to see is a Build-Your-Own laptop system that picks from a set of things that make sense and allow for customizing it. E.g. having two keyboard sets, one with and one without a numpad, and make it so you get the ability to add speaker holes for better fidelity. Some of the other options seem to be a bit redundant, but I digress.

Edit: Ok I filled it out, and I want to clarify: Allowing for the 13" mobo to fit would be nice, but making a 15" mobo that has a socketed CPU would also be good, so somehow make both fit? Then basically everything else should standardized under whatever would win the popularity contest, keyboard situation aside as I mentioned above, and I’d say call it good.

About the flex cables, how viable is it ? I know that the usb4 would work pretty well (even losing some speed) but what about the other components ? are their cables easily extended ?

The title could be something more generic to call everyone wanting any larger model.

About the flex cables, how viable is it ?

The usb ports are probably the most ciritical one. Especially TB4 has strict rules for signal integrity. The 28W cpu on the 13.5" model is also not able to support two ssd slots or more than 4 extension slots to my knowledge, you can’t have everything unfortunatly. A intel 35-65W cpu could offer those features on the other hand, which would only require a slightly bigger cooler.

In my opinion a new mainboard formfactor for 15" would probably be the best solution since it could offer more expansion options like more ssd slots and more expansion slots aswell as being more space efficient to accommodate for a bigger battery. Depending on how you place the screw holes it could also be backwards compatible with the 13.5" mainboards. It could still be compatible using extension cables. In other words you can put a 13.5" mainboard inside a bigger laptop but you can’t do it the other way around

If the signal can travel 2m across a cable…then it should be equally possible to travel 5-8cm to the left / right. I think…

15" would probably be the best solution

I tend to agree. Additional cabling length for the current mainboard could be tricky (speakers, display, headphone jack daughter board…etc).

If the signal can travel 2m across a cable…then it should be equally possible to travel 5-8cm to the left / right. I think…

Probably yes, though adding connectors in the way is bad for the signal integrity. After a quick look i couldn’t find any cable extensions for 40Gbps either with male and female connectors

adding connectors in the way in bad for the signal integrity

You’re probably right. I wonder if there’s some TB4 specification that states what connectors is best suited for in-device signal path extension.

maybe 16" would be a good compromise between the 15" and 17" crowds. That way framework wouldn’t have to design 2 laptops

Not a bad thought. I can’t help but wonder if people are too opinionated about certain aspects of laptop design to accept only one larger laptop SKU though.

To be fair, the new RTX series have closed the gap by huge margins. Oftentimes the equivalent pro version is basically rebranded with the same chip anyway

I have no idea what is that and why will anyone need it. A 6 row with numpad is more than enough.

Everyone want that. However, unless we are going to use all desktop CPUs, it’s simply isn’t a option.

This shouldn’t be difficult. The large chassis can easily house the 13 inch. Yes a lot of space will be empty but I guess it don’t really matter.

My priorities, as a lot of you might actually look for, is dual m.2 slots (or a m.2 and a 2.5 inch). Yes, a single 2TB is more than enough, but redundancy and backup is often overlooked. It’s be so nice to just have the drive inside than to connect one externally (especially when you can true dual-boot from independent drives if you have more than one drive)
In the face of the storage (as mentioned above), even dGPU is not a issue since Intel Xe is actually quite capable (as a iGPU anyway)

Like I said earlier somewhere, I want the 15 inch (and the 17 inch) to be effectively “aircraft carriers”. They hold large amount of planes (storage), have plenty of access port, lots of connectivity (to be fair, 4 port is barely acceptable. But I certainly prefer a ethernet over none) and lots of endurance (in the form of physical durability), and multitask well (2x RAM slots). How fast it goes (e.g. whether it have a dGPU) is not very relevant.
And because it’s these priorities (rather than having a fancy collection of built-in dongles), I also looked at Dell’s offerings and their Latitude 5520 is very powerful in this sense.

I have no idea what is that and why will anyone need it. A 6 row with numpad is more than enough. 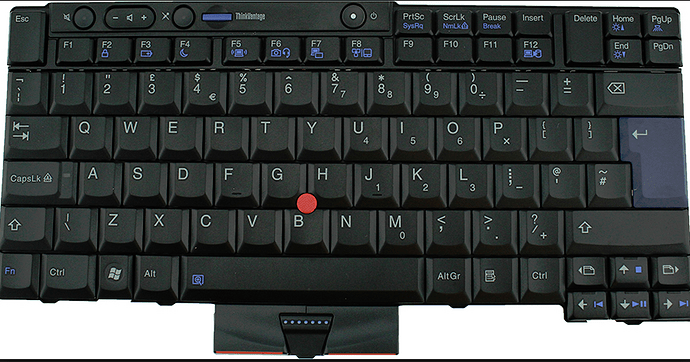 It’s great for office use.

Lots of us don’t want a number pad. if offsets the keyboard, and we like our centered keyboard.

I would love a 7 row keyboard with trackpoint only. touchpads can go rot in a landfill. Maybe even break out the laptop function buttons into a separate 8th row.

Wow “no numpad” is beating numpad?

It’s great for office use.

I can guarantee there will be a tremendously heated debate on whether we will need a 7 row keyboard or a numpad
The numpad offers several interesting alternatives, one of which is Mouse Key.
The other reason is because there are some people that just type on the numpad like crazy fast. And when it’s not in number mode you have all the navigation keys.
I mean, yes, a keypad offsets the qwerty, but I don’t care. I can just shift my hands slightly to the left (and the trackpad too)

trackpoint only. touchpads can go rot in a landfill.

I personally like using both. Trackpoint is good if you want to move in one direction continuously, while trackpad is good for precision manuever.
Because I play World of Tanks on a Thinkpad (wut)
When I’m playing artillery or when I’m looking around, Trackpoint works great because I can pan all the way from one side of the map (or rotate my turret) to the other side, but the trackpad is useful if I want to say aim at a weakspot or aim at the tracks. Personally I will prefer to lose the trackpoint (because I want more precision), But I don’t … yeah. I don’t want to go into the entire debate. Let’s watch the votes.

personally I don’t really use the numpad, but I had used it before and it’s more convenient than a. Fn + direction and b. reaching all the way to the top and search for one of the keys that look indifferent
like look at the top of that thinkpad keyboard for a second. It’s so cramped with tiny keys.
I also use multiple inputs at the same time (e.g. pentablet+trackpad/trackpoint or mouse+trackpad or whatever combo)

For a computer of 14" or smaller, the majority of people would opt for a 6-row keyboard without a numpad and just a trackpad. For 15" to 16", people appreciate the space being filled up with a numpad.

I think it would be better to split off 15" and 17" as sperate models. I would really like a numbpad but it seems like other people do not. having the numbpad for the 17" would be a compromise. whichever is built they should be compatible with the current I/O cards for the 13".

right now i don’t use my laptop for gaming but i might need to use it for cad work in the future so having a better gpu would be nice. but if we are going to keep the modularity stuff having an MXM slot for the gpu would be preferable. but that would take up more space so it would probably only happen in the 17".

i think both should have a permanent full sized ethernet port or at the least an I/O card that sticks out past the laptop to get a full size ethernet port.

As someone who upgraded from a hp pavilion g6-1d73us the trackpad feels plenty big and doesn’t interfere with typing.

the biggest thing for me is whether or not it is compatible with the 13" motherboard. if you are going to go that route i hope it has the option to have its own motherboard. that would mean the 15" could use the 15" mobo or the 13" and the 17" could use the 13", 15" and 17" mobo. kinda like having itx, matx and atx boards for desktops. and if you are using and undersized mobo maybe to make sure all the ports work a separate daughter board to act as a hub. and this would let the 17" have an MXM slot while also having the ability to get a bigger battery if the smaller mobos are used.

Another idea i had is to make a standard for the cpu to be slotable. yes you could just use desktop parts that have a socket or you could use mobile parts on its own MXM style card. that way if you want to go from the 15" to the 17" you can just get the motherboard (or not even a mobo if the 17" can handle the 15" mobo) and chassis and move over your cpu, ram, storage etc.

for me a touch screen is not need but i think having the option to upgrade to one is cool. having an artist grade touch screen to me would mean the laptop would also have to be a 2in1 which would greatly increase complexity which i don’t think is good as such an early stage in the company’s growth.

Agree, I use the function keys like they were used in the 80’s. Before media came along.

The trackpad/trackpoint poll really shows how the vocal minority can really appear bigger than it actually is.

Where is the Ryzen option? That needs to be a serious thought for the next iteration.