I got my new DIY laptop last week and everything is awesome, except the display:

Every once in a while (and I can’t figure out what might be causing it) the entire display shifts color palettes. After a little while it might shift back. Putting the laptop to sleep and then opening it again usually resets the display to the correct colors.

I’m running Arch Linux on the machine, and am happy to answer any other questions as well, of course.

Thanks for any help!

Just to update anyone else having a similar problem: RandomUser made me think to check for an app that changes the color temperature based on time of day. And indeed, I believe the problem may have been caused by wlsunset, a Wayland app that does exactly that. I’m doing some more testing to make sure that I’m correct about that.

A few thoughts about this issue as Framework support pointed to it in a discussion.

My framework laptop is creating unusable screen images during increased sunlight. The laptop/operating system is changing the colors to a reduced depth (appearance only - no details) and a low contrast where the system is placing white text on a nearly white background. This isn’t specific to a program and there are no significant customizations loaded. I can reproduce this failure by sitting in a bright room which induces the failure and covering up the Ambiant Light Sensor (ALS) and the problem magically goes away.

Would be happy to disable the ALS if it were directly exposed as a driver.
I recognize that isn’t a fix, but I need a functioning laptop.

In the initial recommendations regarding this, the first two were already completed. Just a note that the description of #2 was wrong. Here are the two locations.

The third suggestion was specific to Intel Graphics Command Center which was discontinued and no longer available without moving to an old driver.
Here is the link to Intel’s announcement.
Discontinuation of the Intel® Graphics Control Panel from the...)

Try making sure that the second setting here (“Help improve battery…”) is turned off:

I´ve had the problem that during direct bright light contrast decreased (blacks turned grey, text lost clear shape). If I covered the light sensor above the display with my hand display went back to normal.
I did all the described changes ( turn of windows auto brightness and HDR, turn off intel control room adaptive brightness) however the problem still persisted.
It only disappeared after turning off local adaptive contrast improvement in the Intel Graphics Control Center: 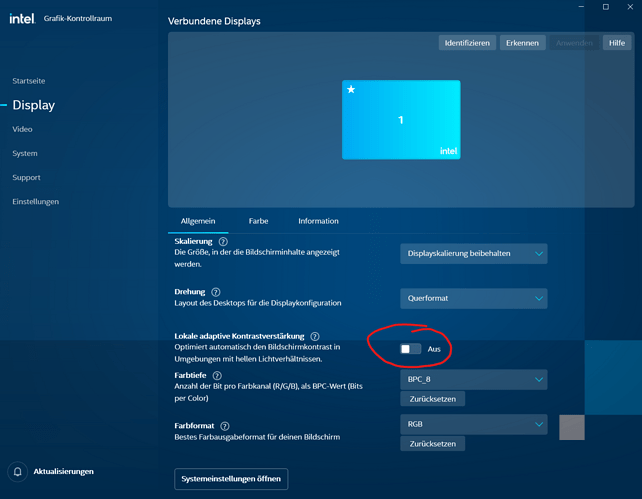