I think it would be interesting if Framework (or someone on the Framework marketplace) developed a custom shaped bottom case that would allow for cold plates to be easily placed close to the hot spots to provide added cooling. Maybe thermal pads on the inside and then a nice smooth surface built into the housing on the outside where you could attach a water block or some other active cooling solution. So two products I guess, one is the special housing (could be ordered at check out or after the fact) and the second would be cooling solutions which could all be DIY or maybe some companies would develop sleek looking laptop stands that have water loops built in. I’m thinking of all these Framework laptop owners with their 1080p cameras on video calls all day

I realize a) this could be total overkill but people might still be interested (you can buy water coolers for your phone for heaven’s sake) b) it won’t be the perfect thermal management system but it will be a lot better then just stock and I think it could be really nifty if you could significantly increase your sustained load performance (while at home) just by setting your laptop down on a stand and nothing else. Sorry I don’t have any pictures of the concept now but I will try to add them later.

Excited to hear your thoughts!

It seems like the bottom case for this computer is an aluminum unibody, rather than a plate that just comes off like on many other similar laptops or something. This would make it slightly harder to implement something like you describe.

Additionally, I’m not sure it would be a good idea to have the casing contact the internal processor mechanically, since this would transfer shock to the chip, and BGA chips are fairly sensitive to mechanical stress.

I’m not personally convinced water cooling is a good “next step up” for an Ultrabook type product, but I would think something like a Henge dock, but with a built in, large diameter blower fan to force air through the machine through the bottom perhaps (not sure if it has vents there at all) while it’s at a desk could be useful to reduce noise when the system is operating as a fixed workstation. I know some manufacturers are doing it with phones and little fans that blow on the back but this is of limited help here, would rather see it forcing air through the actual chassis. I’ve tested, and am testing, a similar setup for another popular 16" notebook to do exactly this. With the right airflow you can get it to run the fans at idle speed doing a stress test, but no word on whether it will actually end up quieter

There actually do exist notebooks on the market that do use a dockable water cooling system, where water cooling was simply overlaid over the cooler pipes for the processor with some relevant quick-connect fittings on the back.

Performance wise Framework claims that this computer will run at 60W turbo, which, if it is a continuous figure, would put this computer at the top of the pack among similar form factor machines with U processors. I would assume that significantly beyond 60W, cooling won’t be the only bottleneck, with power delivery starting to be more of a concern.

Performance wise Framework claims that this computer will run at 60W turbo, which, if it is a continuous figure, would put this computer at the top of the pack among similar form factor machines with U processors. I would assume that significantly beyond 60W, cooling won’t be the only bottleneck, with power delivery starting to be more of a concern.

Thank you for the clarification. By this, is it implied that the PL1 (Short Power Max) and associated time frame are not necessarily hard limits, but rather the capability of the cooling system to dissipate the power in specific situations?

In other words, under ideal ambient temperature conditions, will the processor be able to operate at >28W continuously (under AC power)?

If the thermal solution is good and can sustain 28W, there is no need to bother with alternative/complicated solutions, IMO.

60W PL2 would be interesting to see, but I would argue that if it requires extensive modification to be done, it isn’t worthwhile, not to mention the efficiency loss when running at 60W. It is unfortunate that CPUs for more portable laptops are made in such a way where it is impractical to run it to its full potential sustained though (assuming the manufacturer cared about that, as most don’t)

Thank you @Larry for your thoughts in this idea

With the robust cooling system the Framework team included and maybe a fan as you suggested I’m sure I’ll be able to keep it humming along just fine.

I think that the simplest solution would be to 3D print a duct (+ gasket maker) around a blower fan.
It’s unfortunate that the PC accessory market does not yet have a niche for connecting a 60W fan directly to USB-C PD.

So far, I’ve found a few products which are suitable

How about something like this sticking out:
https://www.amazon.com/dp/B00ZA0HFSA
as an attachment, maybe with additional heat pipes contacting the CPU?

Alternatively, not sure if there would be loads of people who would be willing to pay for vapor chambers instead of the dual heatpipe solution.

It seems generally impractical to DIY solutions involving heat pipes or vapor chambers, mostly because the wicking material is proprietary and not for sale.
I also think that, for a laptop, any solutions that modify the bezel miss the point of the form factor.

The idea of an (additionally) watercooling option is great. I’ve watercooled my XPS13 9360 with 23W TDP and Temps are at 55°C at full load and even on Short max Power of around 45W it’s below 75°C
And that without any noise from the fan.
I can provide pics.
For the framework laptop I am thinking about a solutions like this: 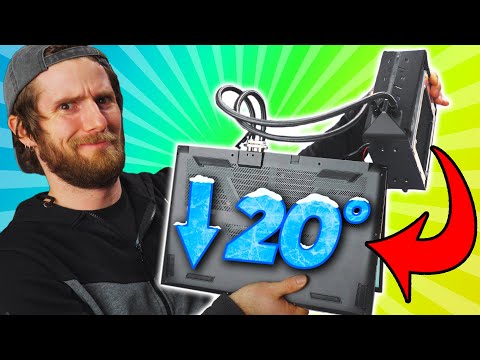 Main Problem is to find the water connector and place it on some point. But I think this could be a perfect option for a very fast and silent laptop.
Is the TDP and throttling fully customizable on the frameworks laptop?