Hello there, after doing some research, I decided that my project has gained enough shape to be shared so that anyone can follow and/or help with the development.

A little bit of backstory to get you bored enough (skip to … if not interested) - how did I get to this point:

I have ASUS TUF DASH F15 laptop with i5 11300H and RTX 3060 and it is kinda good and kinda bad at everything. Not enough performance for my gaming (3440x1440 144Hz kinda sucks with 3060), not enough portability for mobility (2KG + adapter still sucks to carry on my back if I commute on bicycle), no touchscreen (it sometimes comes in really handy for some of my work) and not comfortable for watching movies when sleeping.
I always had this idea of my endgame device, since the PDA age, of a docking one-for-all device, that would be as small as possible and as powerful as possible after docking. That would fulfill a role of a smartphone, tablet, laptop and desktop PC.
So I started browsing laptops with sufficient CPU performance, low weight and thunderbolt for eGPU. Problem is, that they were quite expensive and RAM was not upgradeable.
My friend was asking me if we could sometimes do a project and build a laptop, to which I always replied that it would suck as laptop motherboards are not very modular.

And then I remembered about framework.

I first wanted to print the existing DIY tablet, but the most popular 3D printer in my area is Prusa MK3S+ that can only do 25x21cm.
So in my head, the smaller version was being created. I asked about the third party displays, batteries and finally I have a basic idea.

So, the basic idea is to print a case that will not have space for speakers, expansion cards and use a smaller display. This is my V0.5 of the case that was made modifying mini PC and FW tablet projects (so credits to them). Not printed yet. 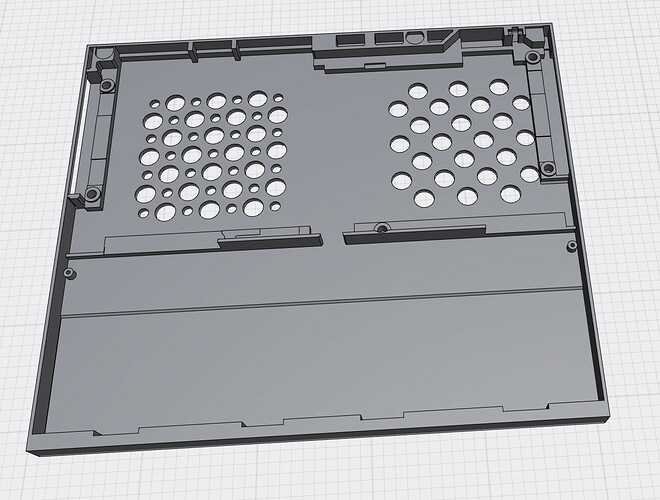 Dimensions: 243.5 x 209.5x12.5 (that is just the back case, without separating plate and without display).
Material: I would like to use ABS for its higher thermal ressistance compared to PLA
Display: 234x168x8 mm (outer dimensions) 10.5 inch IPS touchscreen 1920x1280 powered by USB C 5V2A, claimed 100% SRGB and 400+ nits brightness and there are many versions and rebrands, be cautious, some may not be touchscreens: Amazon.com : 10.5 inch touch IPS 1920x1280, https://www.aliexpress.com/item/1005004300635198.html or Wholesale 10.5 Inch Ips Hd Audio Output Aluminum Alloy Metal Touch Portable Monitor - Buy Portable Gaming Monitor,Gaming Display,Industrial Embedded Monitor Product on Alibaba.com
Battery: framework original

Disclaimer: I did not buy nor print any part yet, I guarantee no compatibility with anything, this is just my personal thought for a project that in my opinion reached a stage that it can be published on this forum for others to follow and provide advice and experience.

Love this idea! a small tablet with the Framework parts is so interesting! Hope you’re able to make progress on it and share with the community! As for obtaining a mainboard, you might be able to find other users in Europe who could sell you used 11th gen mainboards after they upgrade to 12th gen?

Wear of the TB4/USB C connectors on the board - they may not have been meant for daily unplugging as there are the expansion cards to be “worn out” instead.

I think this is unlikely to be an issue. Any USB C port from a major manufacturer of connectors is going to be built to reasonable standards. And USB C was not designed as a limited use internal connector, it was expected to see use & abuse. The parts that should be more likely to fail, the moving spring contacts and spring loaded retention hooks, are on the cable side.

Azure, that´s what I hope for. MJ1 thanks, I was only a bit concerned, because Linus said something about it in the review, but maybe he just critisized the inability of them to be replaced.

Display update: After talking to alibaba manufacturer (yeah, it seems that it is possible to buy a single item from alibaba), they seem to be able to ship the display in multiple versions: Non-touch (often found on amazon), Touchscreen with speakers on the back (good, but not very desireable as they will be covered by the mainboard assembly and there may be no other speakers in the tablet), then touchscreen with side mounted speakers and metal case (looks promising) and what is the most promising for me - caseless version - just the panel, controller board and wiring.
That would allow me to reduce thickness of the device because if my case is at least 12mm thick, their case is at least 8-10mm thick, then add some mounting plate in between and some shroud around and we are at 30mm thickness, which is less than desireable. Now if they ship only the components, I can make my case just thicker enough to be able to mount them. I hope to make it 20mm thick or less. I honestly have a bit of hope that this will become my daily driver and therefore want to design it in a practically usable way.

EDIT: Display ordered from here: Wholesale 10.5 Inch Ips Hd Audio Output Aluminum Alloy Metal Touch Portable Monitor - Buy Portable Gaming Monitor,Gaming Display,Industrial Embedded Monitor Product on Alibaba.com - I ordered it without metal case, without adapter, without HDMI and one USB C cable, it costs 88 USD + shipping + tax (so 150 eur for me because EU). That means only panel, boards, wiring and speakers will arrive. Seller confirmed that it will work via single type-C cable.

Wifi update: One possibility certainly is to use an extender cable and board for the wireless card. But I am also thinking about permanently attaching USB hub inside the case. That means, the TB4 ports would be accessible only from one side, on the other side there would be a display permanently plugged in and a hub permanently plugged in, providing a variety of connectors and internally, one USB port would be occupied by a USB wifi module. It would provide less signal strength than a module with dedicated antennas, but for me wifi range doesn´t matter too much and the advantage of having USB type-A ports embedded sounds very good, as well as not having to bother with extending the second m.2 (wifi) slot.

aah … I’d actually love for the idea of a touchscreen 2-in-1 tablet. Although, I also want big screen and numpad.
Massive 15’ tablet? Maybe. I might have to try them in the local Dell shop.

I think this is unlikely to be an issue. Any USB C port from a major manufacturer of connectors is going to be built to reasonable standards. And USB C was not designed as a limited use internal connector, it was expected to see use & abuse. The parts that should be more likely to fail, the moving spring contacts and spring loaded retention hooks, are on the cable side.

Nope, I’m pretty sure NRP clarified and said they went with the lower-strength connector, it should be at least 500 or so cycles.

Nope, I’m pretty sure NRP clarified and said they went with the lower-strength connector, it should be at least 500 or so cycles.

Wow, that’s very unfortunate for projects like this. I really hope that changes on the next mainboard.
Would you happen to recall where NRP said that?

I had this feeling because Framework never advertised their motherboard ports for direct use, always just with the expansion cards, they must have a reason for that, so with 500 cycles, you are just confirming that. In that case, in order to absolutely minimize the cycles: