When we announced the new Framework Laptop with the latest 12th Gen Intel® Core™ processors, we provided a small peek at its performance: in Cinebench R23 multi-core — which measures overall CPU performance — 12th Gen posted results almost double those of 11th Gen! We’ve shared some excellent reviews about the upgrade in our last announcement, and will go into greater detail today by sharing benchmarking results that demonstrate how powerful the upgraded Framework Laptop is across a broad range of use cases.

With both generations of the Framework Laptop available in the Framework Marketplace, there are currently a total of six different processors. For our first test, we chose Cinebench R23, a popular benchmarking tool based on Cinema 4D’s rendering technology, to check each processor’s single core and multi core performance. A Cinebench run brings the CPU to maximum load for 10 minutes, making it a great measure of sustained performance.

The results show that Framework Laptops with 12th Gen Intel® Core™ processors are a leap ahead of their 11th Gen counterparts. The i7-1280P, with 6 Performance cores and 8 Efficient cores delivered an impressive multi-core score of 11,076 — 90% higher than its predecessor. Check out the table below to see the scores for each model.

“Can you game on the Framework Laptop?” is a question that regularly pops up in our community. In a recent review published by Notebookcheck, the reviewer tested a range of popular game titles and shared the frames per second (FPS) in various settings for each game. When compared to other laptops in their database, the graphics performance in a Framework Laptop with a i7-1260P is “about 5 to 15 percent faster than the average laptop” that uses the same integrated Iris Xe graphics with 96 EUs. Here are some of the titles that can run at 60 FPS or better:

We did a comparison of our own as well. Zach McGarvey, our unofficial “gaming hour” organizer here at Framework, suggested the ever-popular Counter-Strike: Global Offensive for this test. We put both 11th Gen i7 and 12th Gen i7 machines through the same benchmark at different settings. It’s exciting to see these improvements in frame rates:

Can you play games on the Framework Laptop? The answer is yes! For graphically intense titles like Cyberpunk 2077, you’ll need an eGPU, but if you’re eager to run CS:GO, Fortnite, League of Legends, Overwatch, Dota 2 Reborn, or other games with similar system requirements, it is entirely possible to enjoy a smooth gameplay experience directly on a Framework Laptop.

One of the great benefits of choosing a Framework Laptop DIY Edition is that it ships without an operating system, allowing you to install your favorite OS and customize your laptop exactly to your liking. If you’re interested in running Linux on the Framework Laptop, a fun way to benchmark your device is to test how quickly it can build the Linux kernel in a default configuration.

To test this, we chose the Phoronix Test Suite, a widely used benchmarking tool that has a built-in Timed Linux Kernel Compilation test that is easy to run. The test was done by two of our team members who regularly run Ubuntu 22.04 on their Framework Laptops for development work: Chris Lombardozzi on the 11th Gen i7-1185G7 with 16GB of RAM, and Zach Feldman on the 12th Gen i7-1280P with 64GB of RAM. Both processors are the most powerful model in their respective generations. The results show the Linux kernel could be built in half the time on the upgraded laptop:

The i7-1280P is the most powerful Framework Laptop available today and this dramatic improvement makes it a great choice for developers and engineers who need powerful hardware in a thin and light notebook.

Is 12th Gen Intel Core right for you?

Now that you’ve seen the results, if you’re interested in upgrading your existing Framework Laptop but are unsure of exactly how to proceed, iFixit just dropped this video: “The Framework Laptop Is Now Fully Upgradable!” that showcases the complete and all together “too easy” process to swap the Framework Laptop Mainboard. If you’re jumping in for the first time, 12th Gen-based systems are available for pre-order, with shipments as early as this month for some configurations.

Looking great!! Very excited to get my first framework! Batch 2

Nice writeup! Quick followup on this:

These figures look abnormally low for both generations. Other 11th gen laptops (e.g. this Prestige 14) with similar TDP are getting over double the average framerate across similar settings.

Would be helpful to know the configuration the CSGO benchmarks were run in (OS, resolution, single- vs dual-channel memory, TDP setting, etc.) as I would expect much higher performance across both gens.

These figures look abnormally low for both generations. Other 11th gen laptops (e.g. this Prestige 14) with similar TDP are getting over double the average framerate across similar settings.

I wonder if it’s something to do with the pixel count.

I wonder if it’s something to do with the pixel count.

Yes, running at native res would explain some but I would still expect higher frames even at 2256x1504.

Can you update the link to the Prestige 14? I don’t think the link is correct.

Going to do some calculations…

So, assuming a FHD can do 115FPS in low, that’s processing around: 238464000 per second.
*Trying not to compare with an H processor…even if TDP is similar.

Pretty close, I would say.

The video you posted doesn’t show power draw. The AMD variant of that VivoBook has a PL1 of 20W, which is much lower than Framework’s.

I think comparison to i5-11320H is fair if TDP is similar because they’re both 4c8t with the same number of graphics EUs on the same arch.

But there are too many variables for my liking to do direct comparisons, which is why knowing the configuration in which Framework’s CSGO benchmarks were run at would be nice.

It’s a big performance boost but I don’t need it. I was hoping more for a big graphics uplift but Intel didn’t deliver that; the iGPU is basically the same, just with slightly higher clock speeds. I’m going to pass on this one, but there are people it will be right for.

AMD’s next APU, Phoenix Point is supposed to have Zen4 cores and an RDNA3 iGPU on TSMC 4/5nm, so here’s hoping there’ll be something nice to upgrade to next year.

AMD’s next APU, Phoenix Point is supposed to have Zen4 cores and an RDNA3 iGPU on TSMC 4/5nm, so here’s hoping there’ll be something nice to upgrade to next year.

AMD just updated their iGPU to RDNA2 with Ryzen 6000 series.
Since they are ahead of Intel by a wide margin, there is no pressure for them to update it right away again. Rather keep an ace up their sleeve, until Intel catches up and then top them right away.
Thats the same move they made with Vega to RDNA2, given there havent been other roadblockers of course.

Since they are ahead of Intel by a wide margin, there is no pressure for them to update it right away again. Rather keep an ace up their sleeve, until Intel catches up and then top them right away.

In theory yes, but in practice, roadmaps get scheduled years in advance, so sometimes you get mismatches. I’m not just speculating though, here it is straight from AMD’s slides presented at their 2022 Financial Analysts Day: 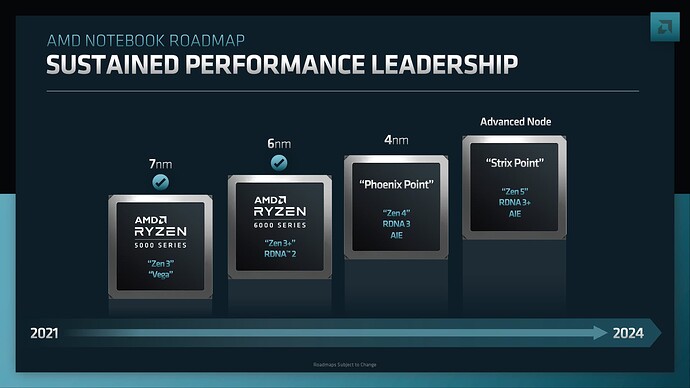 (The speculative part is that Framework hasn’t announced a Ryzen 7000 board yet, but I’m assuming they will, especially with the expectation supply from AMD will be much better for 7000 generation than w/ 6000, which 8 months in, has been a big whiff so far, tbh).

What would be the next processor that will improve it’s processor more faster than this one?

Yeah, performance numbers are nice to see, but battery life, temperature, sleep energy drain rate — what bothers me most with 11th gen.

The leap from 11th gen is great, but the difference between 12th gen CPUs is abysmal and your numbers support that.
i5-1240P → i7-1260P being $300 and i7-1260P → i7-1280P being another $410, for a total of 15% speed improvement, and almost no difference in single thread? i5 seems like the clear value winner, although maybe there’s something else that matters between these CPUs (onboard GPU?) but you haven’t posted anything either.

For gaming it seems the bottle neck is definitely the iGPU.
Most demanding game takes 40% CPU on the 1240P and 100% iGPU.

I don t do video editing, or use my laptop as a server. I really think there is enough CPUs horsepower for some years ahead. I personlly am updating because I have a 2 core 8145 that don t handle the current videoconferencing + workload. (OBS studio + 6 video streams on google meet + heavy internet app + 10 web pages)

Would someone post World of Tanks Encore RT bench scores on the forum?
Any of the 12th gen is acceptable

so I will unfortunately be skipping this generation.

why not 3D print your own enclosure so it’s one-piece?
The only problem then is whether UAS (USB Attached Storage) is good enough. I think there are SATA adapters you can plug in to the SSD slot to get (mostly) native SATA.