Manufacturing starts on the new Framework Laptop in Taiwan

We’re happy to share that we’re now in the final steps of setting up and testing our manufacturing site in Taiwan for the new Framework Laptop with 12th Gen Intel® Core™ processors. We started development of this product upgrade shortly after we launched the original Framework Laptop, and nearly a year later, it feels great to see systems moving down a production line. Over the course of that period, we performed a number of prototyping and development builds of systems where we refined and validated the design of the new Mainboards and CNC Top Cover. During this final build called PVT (Production Validation Test), we complete setup of the production line and make sure operators are fully trained. In the GIF above, you can see an auto-screwing fixture being tuned for assembly of keyboards into Input Covers. While some stages have robots or advanced test machinery, the actual final assembly steps aren’t much different than what you can do following the guides on your own Framework Laptop! 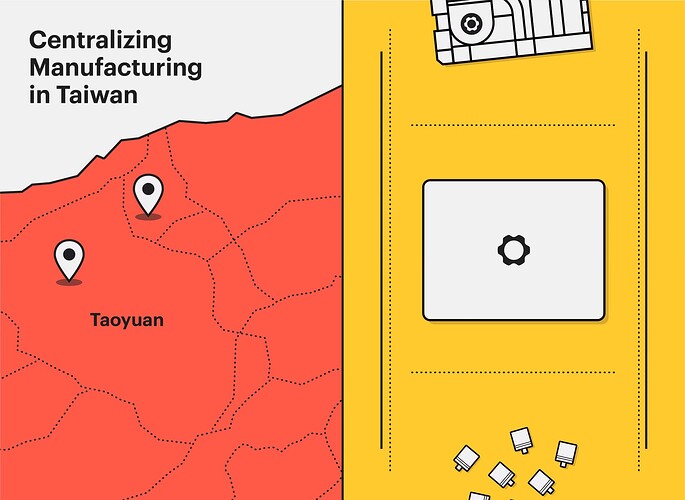 One key move that we’re especially proud of with the new Framework Laptop is centralizing manufacturing in Taiwan, making us one of the few companies building consumer notebooks there. It’s been an incredibly challenging couple of years with ongoing port and factory lockdowns, international freight meltdowns, and silicon shortages, but we’ve been able to stay in nearly continuous production throughout. With the new Framework Laptop, we took all of the lessons learned and created even better supply chain infrastructure. This site in Taoyuan, Taiwan, at our partner Compal, is where we originally performed final assembly, test, and pack-out of the Framework Laptop while shipping the Mainboard and subassemblies from China. With the 12th Gen Intel Core version of the Framework Laptop, the Mainboard and major subassemblies are made in Taiwan too! This lets us have tighter control on quality and massively reduce the risk of supply interruptions.

We’re also optimizing our logistics by shipping pre-orders for all countries directly from our fulfillment partner in Taoyuan, a short drive from the factory. This means we can shorten the time from a laptop leaving the production line to landing on your doorstep to as low as single- digit days in many cases. All of this infrastructure also makes it easier for us to scale up our product and Marketplace volumes and reach new countries, which we will continue to do over the next year. You can help us prioritize by registering your interest on our country selection page.

The Marketplace lets us enable you to upgrade and customize your Framework Laptop whenever you’d like. That includes substantial leaps like moving to a new Mainboard or picking up an Upgrade Kit, but also smaller optimizations. For example, we’ve just launched a new version of the Hinge Kit with higher torque for those who prefer higher force for adjusting the lid angle. We’re also excited to share that as of this week, the first Marketplace items are now in stock for shipment to the UK, Germany, France, Netherlands, Ireland, and Austria, in addition to most being in stock in the US and Canada. These orders currently ship directly out of Taiwan, and we’re exploring more local fulfillment options to enable faster delivery times. We’re looking forward to getting parts and products out to all of you!

I love that GIF, do you have any more manufacturing videos? maybe 12th gen? That gif just took me down a road searching for those “mysterious” unpopulated connectors

Happy to see my framework arrive in august

I commented on this in another thread, but capturing here too: We get it and we agree, freight prices suck. Incredibly, the true cost of shipping is actually higher than what we’re charging, and we’re eating some of the cost to make it somewhat less crazy.

There are two things that we are doing to improve this though:

We’re working with our fulfillment partner to find alternate ship methods that could be lower cost, though at the tradeoff of potentially being a slower method.

We’re investigating standing up a local fulfillment partner in Europe specifically for low cost items that are expensive to ship directly from Taiwan.

Let me preface this by saying I know that this request is not an easy task. But many people including myself would love to see a 15-17 inch laptop with more expansion card slots, bigger battery and maybe even a option to add a DGPU!
I’m currently on a 2018 15 inch HP laptop and have honestly not been compelled to upgrade it… Until I heard about Framework!

Really looking forward to seeing this dream laptop Made in Taiwan could finally ship to Taiwan.

If you build everything in Taiwan why it’s not possible to buy in Japan what very close or even in Taiwan itself?

If you build everything in Taiwan why it’s not possible to buy in Japan what very close or even in Taiwan itself?

Physical distance isn’t the issue. Registering a business that work in those areas, tax etc. Warranty.

The same goes for countries adjacent the EU or Mexico they don’t have access yet.

The redesign costs would be quite significant so there would have to be a good market and I imagine the 13.5" is pushing it a bit with the new Gen12.

Physical distance isn’t the issue. Registering a business that work in those areas, tax etc. Warranty.

The same goes for countries adjacent the EU or Mexico they don’t have access yet.

In many countries you shouldn’t do it, you can just send a laptop by mail. Japan even supports parallel imports.
Many Linux laptop vendors do it.

In many countries you shouldn’t do it, you can just send a laptop by mail.

Framework has stated in the past that they want to be sure that all their logistics and guides are available in new countries before they can sell to them. While it is possible for them to “just send a laptop in the mail” they want to have useful resources like native language guides, local logistics, and proper warranties and support, which is what takes time.

Yes that’s the easy part but it may get stuck due to paper work at customs and then not arrive and Fairphone can be expected to provide the proper tax requirements via each countries routines.

And of course there’s the warranty as mentioned.

If a consumer wants to take the risk they can import a laptop at their own risk but then can’t really expect Framework to sort out any logistic issues, nor provide a warranty.

I’m so happy that the Framework Laptop is going to be made in Taiwan.

Hi Tim and welcome to the forum

The original was built in Taiwan so that hasn’t changed, but some parts are made in PRC

I would love a 17in with more ports and a number pad. Being able to add a dgpu would also help keep the hardware useful longer.

I would love a 17" screen, or at least 15". And it would be great if you could get a hi-res option. I just had to buy a laptop and chose the 17" hi-res option, even though it meant I had nothing but usb-c ports. I was really bummed about that, but I wanted the big hi-res display more than I hated carrying a dongle. 13" displays are way too tiny.

I’m pretty sad to hear I won’t be getting a frameworks laptop in Taiwan any time soon. Especially knowing that the factory is only a few hours’ drive from where I live! I’ve lived in Taiwan for 12 years and understand the local culture very well. There are so many opportunities to expand here!

If there is any way I could assist in making this a reality, please let me know!

Where can I find a list of manufacturing changes/improvements from the last version to this latest version of the Framework, Intel 12th Gen version ??? (other than the intel 12gen parts changing)