Are you using HDMI/DP port while charging? Useful datapoint, so thanks! I did try a 100W charger and it didn’t change anything.

I only charge my laptop through the thunderbolt port, not data ports but yes I do have a HDMI screen connected at the same time.
Actually I vaguely remember having blinking issues when I tried powering a raspberry pi through the data ports.

I only charge my laptop through the thunderbolt port, not data ports but yes I do have a HDMI screen connected at the same time.

Received my framework (gen12) yesterday, and had been using the i-tec (CADUAL4KDOCKPD) Dock previously.

I have been able to get this to work without any problems now on Ubuntu 22.10 (beta) with the 1.12.0 evdi driver. I am using one of the HDMI ports too, so far not had any problems. It’s my work laptop, so will know next week how well it goes

I’d love some help diagnosing dock issues on my Framework with Ubuntu 22.04.1 LTS. I’ve tried two different docks now (Caldigit TS3 Plus and OWC Thunderbolt Dock) and gotten the same issues, so I’m pretty sure it’s the laptop (or an Ubuntu config issue) and not the dock(s).

After the Ubuntu distro upgrade (upgrade from LTS 20.04 to LTS 22.04, running KDE) I started experiencing a problem with external screen resolution after the wake up from sleep. The monitor resolution is small (1280x768) and doesn't respect the...

hitting keys on the external keyboard and clicking the external mouse does not succeed in waking the laptop and turning the monitor on.

As for this, you might want to give the TS4 a try:

Thanks, @Second_Coming , that’s really helpful. Larger question: does Fedora seem in general more dock friendly than Ubuntu? Happy to switch distros if it’ll reduce the incidence of these gotchas.

I picked up a Comsol 2x HDMI dock in Australia and that seems to be working fine on Win11 on my FW. 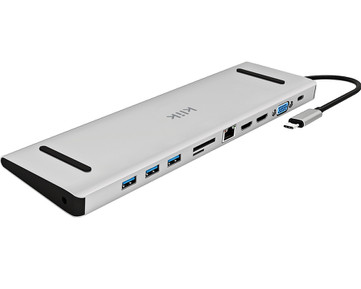 DetailsProduct BriefNever miss a thing with this exceptionally compact and versatile Klik 11-1 USB-C Multi Port adapter that fits discreetly under your laptop to save desk space. Connect your Windows computer when you are in the office, working from...

It is marked as end of life, but there is 3x HDMI that has replaced it. It’s driving my monitor fine, as well as audio duties and USB-A. Pass Through charging seems fine as well.

Will document in this post as the testing progresses.
So far:
Fedora 36: pass-through charging works, HDMI works

I use the docking station of my old laptop, a Thinkpad USB 3 pro dock.

I’d like to report that the initial impressions of the Lenovo ThinkPad Universal Thunderbolt 4 Dock are good. It works with my two 1440p screens attached to the DP ports on the dock while also passing through the QNAP 10GbE SFP+ dongle I attached to it. Running Kubuntu 22.04.

1) Power: I had the same experience as @Wade_Richards describes in reply #177 w/the power delivery. With just the Belkin dock connected for power, Windows shows it as charging - but it will slowly discharge the battery. after about 8-9 hours, the battery will be depleted, unless a second power supply is connected. I am currently using an Apple 87W charger to supplement; it’s super weird to have multiple power supplies connected to the same computer.

2) Second display won’t maintain connection: I have two external displays: an LG 4k and an ASUS 1080P. The Belkin dock only has a single DP port + an additional TB3 port.

3) KVM connections aren’t reliable (trouble both docked and undocked). I’ve had nothing but headaches trying to use three different KVMs - especially when connected to the Belkin dock. I have to connect any KVM to the USB-A snap-in module to get it to work at all - and I am currently only using the USB for K and M, and manually switching the second display in order to be able to keep my desk from becoming a hellscape, lol.

Generally speaking one would like to use a single TB/USB-C port connection to any laptop, and let the dock do its job. I’m hoping that the upcoming 3.06 release will address all of these issues - hopefully the TB4 certification process will iron this stuff out. Thanks!

(I was unable to edit the table because there are too many @-mentions in it). I have a Belkin Thunderbolt 3 Express Dock HD. The DisplayPort, Ethernet, USB and Audio all work. Power Delivery is the problem. It only trickle-charges, it does not deliver the full 85W. I need to plug in a separate power supply into the laptop to use this dock.

I have a Razor Thunderbolt 4 dock (https://a.co/d/gqRt8BC). Charging (90W), displayport via Thunderbolt (one monitor 4k@60Hz), USB, the SD card and the audio out all work. It works with both Linux on my Framework and OSX on my macbook pro.
Interestingly, the audio device only appears when you have something plugged into the combined mic/earphone jack. This is clever, as you can’t have the audio output going to the device when there’s nothing plugged into it.

picked up a Comsol 2x HDMI dock in Australia and that seems to be working fine on Win11 on my FW.

It is marked as end of life, but there is 3x HDMI that has replaced it. It’s driving my monitor fine, as well as audio duties and USB-A. Pass Through charging seems fine as well.

OK… So I’ve been running this since I’ve got my FW, and it’s been great…

What has been the problem is my older Logitech K270 Keyboard and Mouse - they don’t like being plugged into a Hub (in fact, Logitech it turns out say not to…) as the keyboard drops out frequently. Fault of neither the FW or the Hub, but the keyboard - something to be mindful of.

It’s working better plugged into the USB-A on the FW, but still not 100% (so I think I’m off to find a new keyboard in town today as I need to write a load this week at a desk)

A little update to my earlier post: One problem I’m encountering from time to time is that one of the screens will start flickering after a protracted high speed network transfer. I’m not sure if this is a problem with the dock or if it is caused by the QNAP SFP+ dongle being attached to the dock.

I have bough the Lenovo ThinkPad Thunderbolt 3 Dock Gen 2 (40AN0135US) and am driving two Full HD Monitors with it. So far so good, but I recently noticed some weird coil whine, but not from the dock, but on my framework 11th gen. I guess it is because of the power supply and I am only having the coil whine when plugged into the docking station. Using my Aukey charger works fine here. Am I doing something wrong here, or is just like this and I have to deal with it?

Your dock should have a charger from Lenovo and a thunderbolt connector that likely has a little square on it. That one should be power delivery and thunderbolt connection to the laptop. Also coil whine is often an intensely personal observation. If you are experiencing it, and everything is hooked up correctly it is very likely that the particular model of device is delivering power in just the wrong way. I would say, either deal with it or get a different dock.

I am testing the Lenovo 40B00135US dock on Windows 11. (This is the same model as @0nn0 above - as far as I know, the US or EU at the end are not significant for the device, only for the power cable.)

Since I didn’t want to spend so much, I bought a used dock for my testing instead of a new one.

Sometimes when I plug in the dock, it seems to work perfectly. Other times when I plug it in, the charging light alternates between on and off every few seconds, and the list of connected devices in Device Manager keeps refreshing.

At first I thought the TB4 cable that came with the dock might be defective, so I tested with a brand new (certified) cable. The first time I used the new cable, it worked perfectly, but after that it did the same thing - appearing and disappearing every few seconds.

I was able to get it connected for long enough to upgrade the firmware in the dock to see if that would fix the problem, but it did not help.

I am trying to figure out if this means this specific dock is defective (and I should return it and buy another one), or if I’m missing anything.

Thats the exact dock I use, though I don’t use windows. My experience with the 11th gen framework laptop on both Linux and FreeBSD is I’ve been having approximately once per day my dock will disconnect for a second causing my screen to flash black and my USB devices to disconnect, and then it will reconnect and everything will go back to normal. So thats a far better experience than what you’re describing which makes me think your dock might be defective. I don’t experience this with my steam deck plugged into my dock but I haven’t tried other thunderbolt devices. I just plugged in a replacement cable (going from 2m 20gbps passive thunderbolt 3 cable to 2m 40bps 100w active thunderbolt 4 cable) to see if that changes anything.

Edit: And my screen just flashed, so the cable can’t be the problem. That leaves the dock and the framework laptop as possible suspects.