Hello all! I was wondering if any of you knew any compatible displays for the Framework laptop? Especially any OLED ones.

The one major requirement is 40pin eDP connector

The one major requirement is 40pin eDP connector

Well and for the panel to fit the display enclosure.

It would be interesting if a match could be found that included touch. I believe I read that the eDP being used on the Framework laptop supports the touch channels to enable something like that.

If we are sharing requests:

A matte screen with a little less high of a resolution. (So we poor linux-folk do not have to resort to fractional scaling as much

A lot of these replacements are 50 or 60 pin and wouldn’t be compatible.

Love the concept of the laptop. But waiting for a 17" version with a upgradeable video card. Nothing super highend but enough to play my basic games while I am doing spreadsheets and presentations.

A lot of these replacements are 50 or 60 pin and wouldn’t be compatible.

RIP, that sad… I guess we just wait on Framework to release new screens on the marketplace then. Something that would be very welcome I feel.

It would be interesting if a match could be found that included touch. I believe I read that the eDP being used on the Framework laptop supports the touch channels to enable something like that.

Yes, indeed, it was stated by nrp that the connector supported touch, would be VERY neat if a alternate screen with touch was found or created!

It’s a external connector, 40pin eDP does not have space for touch systems.

The HP spectre x360 14-ea has the same size screen, with the same 3000x2000 pixels, but OLED. It is also a touch screen, but at least this suggests suitable OLED screens are available. Unfortunately, HP lists only part numbers for the whole assembly.

Love the concept of the laptop. But waiting for a 17" version with a upgradeable video card.

Nvidia isn’t making MXM versions of the 30 series and they’ve never sold MXM cards to general public anyway. Framwork would have to build it’s own system and that would not fit in a slim device.

We can only hope that future iteration of Framework laptop will provide better eDP connection.

For instance, could I theoretically use this panel, even though it’s eDP 1.3 (user login)?

Or, do I exactly need to match eDP versions and go with a panel like this (user login)?

Given the way DisplayPort handles a lot of things, I would assume so, but I’m curious if anyone here is better at the technical nitty gritty with panels

For instance, could I theoretically use this panel, even though it’s eDP 1.3 (user login )?

That’s a good question to investigate.

According to VESA.org:
While eDP 1.4b represents the latest VESA Embedded DisplayPort standard, systems in production today are using displays built to eDP 1.3 and earlier. By mid-2016, systems will begin to incorporate eDP 1.4b, and the final standard should continue to increase in adoption and be used in production for several years. In the meantime, VESA members will begin discussing plans for eDP 1.5, which will take advantage of new features that will be introduced in the future release of DisplayPort 1.4. The eDP 1.4b standard is available to VESA members. More information is available at www.vesa.org.

Another hint that it might be possible is this cable, which proports to enable an eDP connector to plug in with a Display Port cable (you might need an external power source to make this work). Since DisplayPort is designed to be backwards compatible, it stands to reason that the eDP equivalent could work.

According to EETimes India:

The ongoing enhancements to eDP v1.4b have been made possible by the flexible nature of DisplayPort. DisplayPort [note: NOT eDP - Soda] is highly extensible and includes the ability to remain backward compatible. An extensive register set is implemented in the sink (display) device to support both new and old features, and other registers indicate device status and allow control by the source. Data packets in the high-speed video interface include pixel data and other various control data. The VESA member companies developing the eDP ecosystem have added the special features described in this article using these DisplayPort features. This will continue, and there is already discussion about a future eDP v1.5 that will utilize the features of DisplayPort v1.4, recently published in February 2016.

This paragraph suggests that eDP 1.4 incorporates backwards compatibility as a feature of DisplayPort (do not confuse DisplayPort with eDP - they are different but similar). So agian, nothing is certain, but it’s possible.

It’s not very explicit, but it seems to suggest that 1.3 displays would work on 1.4 hardware. You’d be on your own to learn about how much this applies to this particular use-case, but theoretically the main difference in 1.4 is power savings, and it should otherwise be pin and protocol compatible.

Frankly, I think it makes sense for it to be compatible with 1.3. Remember: a lot of transition happens, but a good standard is one that enables the least rework by the stakeholders, and someone who runs a computer fab won’t want to redo everything all at once. Supply chains are already complicated, and adding to that complexity is not an attractive position for anybody involved. On the other hand, there was an eDP standard that was said to have eliminated some pins, I can’t find information indicating whether these were eliminated from the physical connector itself. In either case, you might take a battery life hit, since the 1.4 standard explicitly added power saving features.

So experiment with caution, knowing that you might not get what you’re hoping in exchange for money spent. This is an experimental situation, but it could also end up in your favour if it does work out. 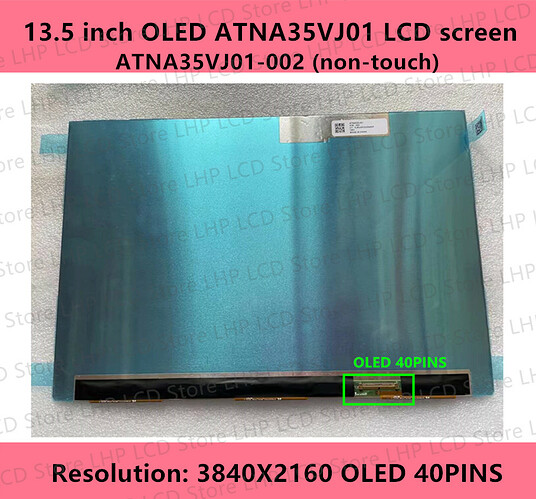 Sadly this is the wrong aspect ratio (19:10 if I’m correct) so it will not fit in the Framework. Although possible with a bit of the backpanel showing loil

I dont know about the aspect ratio to be honest, but the one selling this has other oled screens for sale, maybe he have some in the right aspect ratio, i will try to dig more later.

I dont know about the aspect ratio to be honest

The LCD display on the Acer Chromebook Spin 713 is the exact same resolution, size (13.5 inch), is 3:2, the full assembly comes with a touch digitizer, and it uses a 40 pin eDP connector (not sure which version). The assembly goes for about $140, not a bad deal. That seems like a match!

This amazon listing seems to come without the bezel (see the description), making it plausible I could tape this thing into the existing top cover of the framework. Thoughts?

I’m not currently knowledgeable enough to know much about the different displays (half of what’s being talked about here goes over my head), but does this mean it may be possible to run a higher resolution display? Or is that, too limited by the connector and cable?