Ordered mine 2 weeks ago. Looking forward to receive it in August. 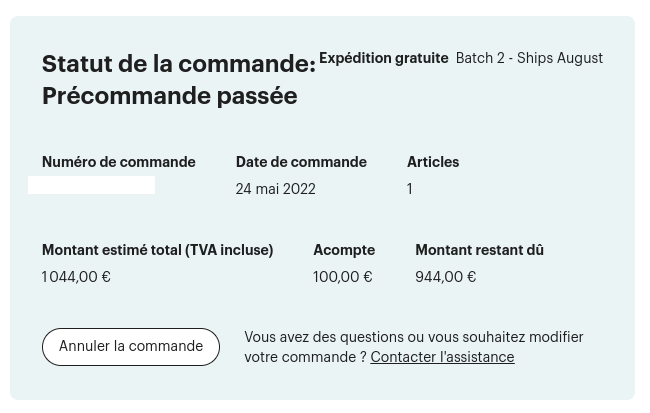 Hopping battery will be decent (7H video) since all reviews with 12th gen indicated less battery life than 11th…strange when you are supposed to have “efficient cores”.

Yep, I’m also in batch 2. Super excited to finally be able to get my Framework. I’m secretly hoping batch 2 will somehow arrive early, but I know that won’t happen.

I ordered the top of the line i7-1280p. Super excited to have 6 performance cores and 8 efficiency cores. I can’t imagine what it will be like to have 14 cores and 20 threads IN A LAPTOP!!!

I didn’t buy the storage or the memory through framework, but I will be getting a 64gb kit for the memory, and a 2tb gen 4 drive (probably samsung) for the storage. I plan on keeping this laptop for a LONG time. 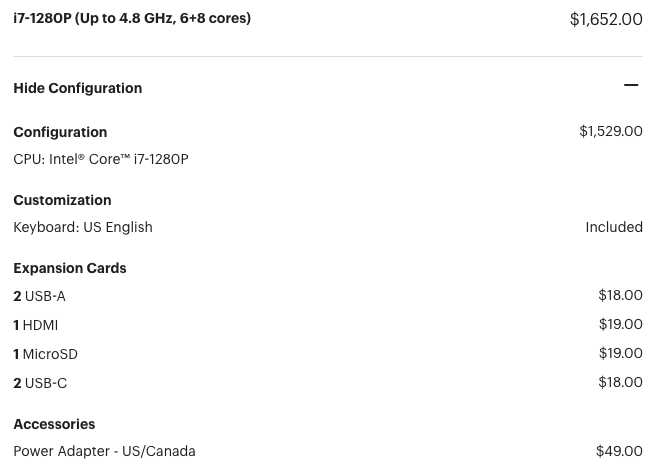 Same @Connor_Bunch, ill buy the ram and storage locally. at first I wanted to get all from framework but found multiple local stores selling it for a bit cheaper, what I save there, I spend on the expansion cards

and also plan on using this for a long time, if atleast the case

Not sure yet what OS ill install first or how (encryption yes/no). Gonna spend time on making it efficient and powersafe me hope. (im a linux person, maybe il try windows as a VM instead of multiboot) 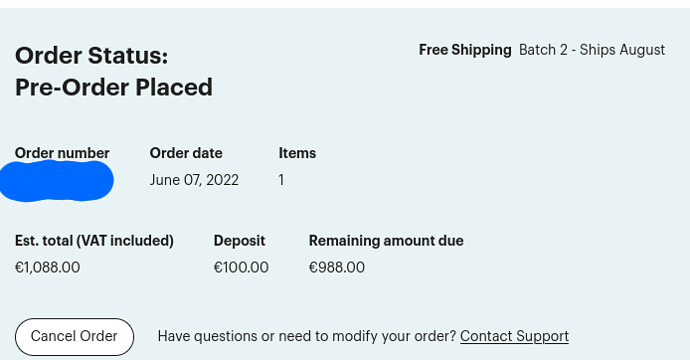 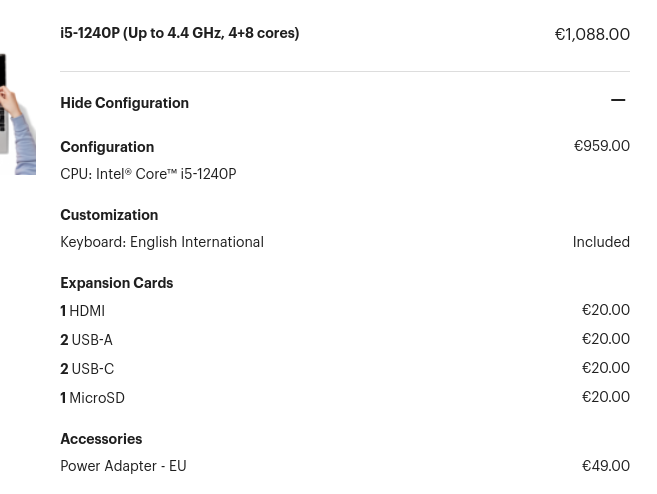 @Connor_Bunch ,
Currious to know why you choose i7, it seems that it gives only 10% better results in benchmarks (20% in iGPU) 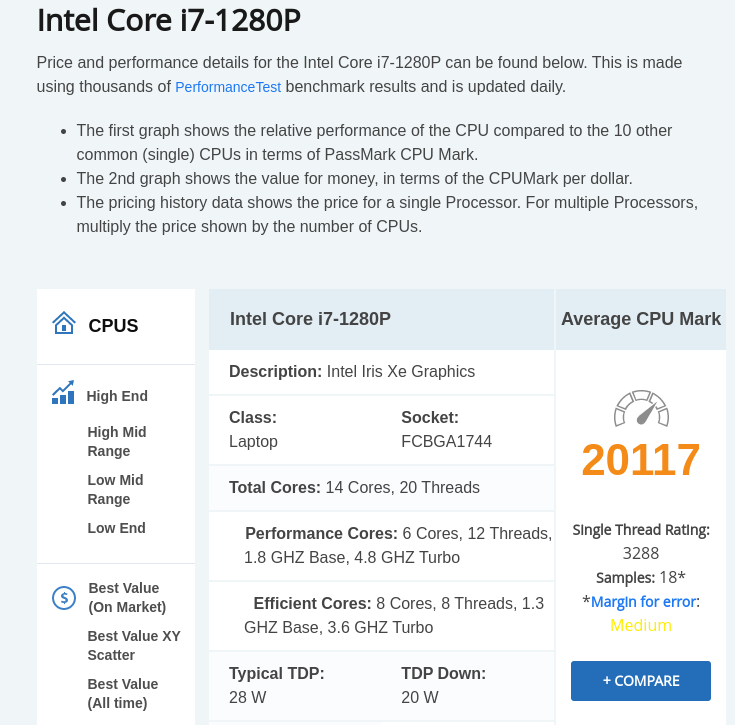 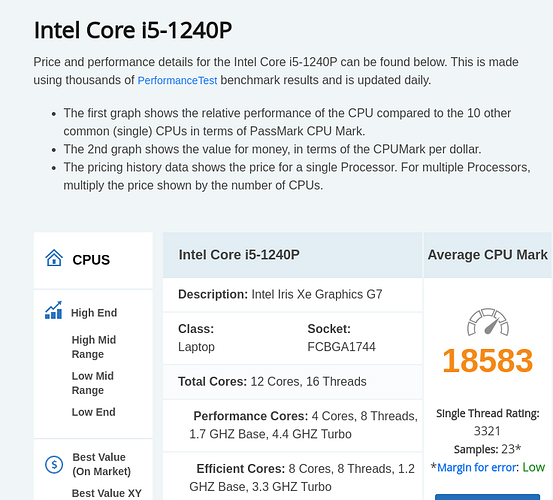 I ll be going aswell presumably for a 2TB Samsung m.2.
I went for the 8Gb from framework to be sure it will boot up with no problems and have reliable tested ram.
WIll install Ubuntu Mate cloning my current SSD, hope this will work nice.

@CodeAsm had dual boot until 4 years ago when a windows update killed my grub , my linux and commited self suicide. Couldn t recover the partition since SSD wips it automatically. Now 100% linux:D

until 4 years ago when a windows update killed my grub

Almost the same, but my lenovo laptop has a menu when its starts and has multiple EFI variable entries, it allows me to select whatever EFI executable ive installed and also allows arguments, so basicly like installing Linux kernel with its arguments in the system itself. booted fine for a long time, had windows, linux, efishell, all as an option and set it to timeout on my Arch install as a default.

I like immediately booting into a kernel, skipping grub. (Im looking forward for Coreboot, if only we could get our systems not bootguard locked or relocked to some coreboot option) but thats a longer waiting game, Im getting a fresh new laptop, from a kinda new era, and have to see what type of boot options are allowed and I can use. (the boot menu any handy, or would grub be a more helpfull method. ill see)

Same reason why I chose i5, not looked up the benchmarks, but specs and some people on the discord, there arent that many functions a i7 woud have against me chosing i5, no vPro needed and Id rather have a few minutes more power (I could try compile on other machines if needed) Are we gaming on these? (openRTC2 for sure)

Ordered a week ago yesterday, hopefully it’ll arrive sometime around my birthday…

I went for the 1240-p and Framework supplied RAM and Storage since it seemed less hassle and (assumed) vendor qualified sources etc.

While I usually get the most machine I can (and was preparred to get the 1280-p) I didn’t think the performance bump was worth the extra money since it’s already a pretty big lift from my current laptop (2012 Retina MB pro) - 2x Single core, 2.5x multi core, even the iGPU is better performing than the dedicated GT-650m(!). Besides, the machine IS upgradable ;-). 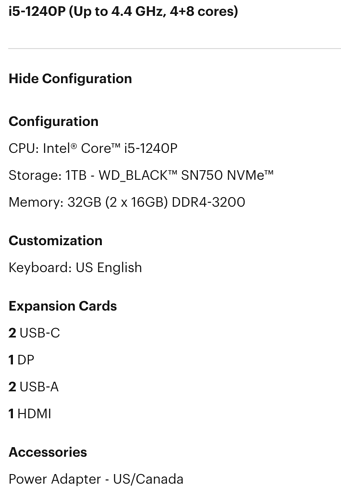 I’m going to be run test networks of VMs, and developing on it.
My only catch is that I’m moving house between now and august arrgghhhh.
So I’m expecting billing issues! Still hopefully it will all be sorted.

Ordered just the other day, I’m very much hoping it arrives in time before the University year starts in early September.

I’m in this for the long haul, hoping the repairability and upgradability will pay off over time.

Not to mention + Street cred from fellow tech-heads.

Been watching for sometime. Finally ordered! Can’t wait to see how it performs.

My Surface Book (1st gen) just quietly passed away a few weeks back. And now I’m here… I

Currious to know why you choose i7, it seems that it gives only 10% better results in benchmarks (20% in iGPU)

That’s exactly what I figured out beforehand. That’s why I went with the i5-1240p… I will expect it to run brilliantly.

Heyo, I’m also a Batch 2 buyer. Been eyeing at this ever since I saw Linus’ original Framework video and finally have a reason to commit to buying a new laptop (giving my current Lenovo Ideapad L340 to my sister for school).

I ordered the i7-1260p DYI config option, since I have some extra RAM and an NVME (980 Pro) lying around from my desktop build. Really hoping the Framework team will keep their promise and have components available for years to come, as I plan on having this laptop for as long as I can, given how every component is replaceable. 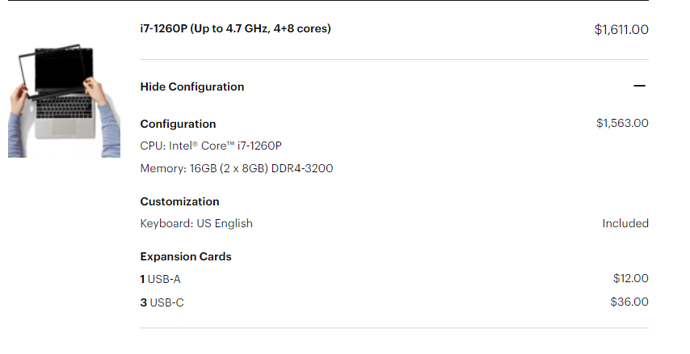 Been thinking about this since I saw the original Linus video. Finally pulled the trigger on a 1260P with 2x16GB and 2TB nvme drive. Eventually I’ll do some kind of egpu as well.

I ordered the i5-1240P DIY model.
I will sell my 11th gen i5 Framework laptop if I like the new one better.

Any idea when batch 2 will be shipped in august? Maybe someone has experience from last year or something

I’m very excited, too. Already ordered in May, so I imagine myself quite on the top of list.

@Sh4pe I see messages from people getting their delivery confirmations of batch 1 currently, so probably in pretty much 1 month.

I went very basic - core laptop no RAM nor Disk because:

As I stated this is my second framework laptop, my first laptop was part of Batch 6 (DIY Machine with similar specs for the i7-1185 CPU).

Here is a link to my post for the first generation framework laptop.

The League of Batch 6 Framework Laptop

Looking forward with the DIY i5-1240p Batch2 order. Originally in batch1 but switched to DIY and ended up in Batch2.

Coming from a MacBook and looking forward to going back to Windows.